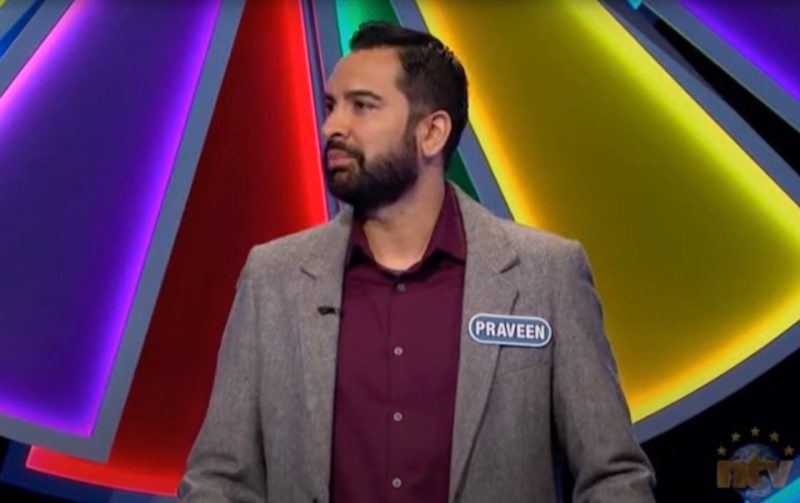 WHEEL of Fortune host Pat Sajak has awkwardly stood by as two players discovered a strange connection during Thursday’s episode.

Praveen and Jamierson revealed they are both sneaker collectors and then halted the show for a tense footwear debate.

During the interview portion, Pat, 75, kicked things off with Praveen.

“Now you’re a sneakers person right?” he asked during the interview segment.

The Orlando, Florida-based contestant answered: “I love trying to hunt for rare and hard-to-find sneakers.

“Most of my sneakers I buy are based on my favorite basketball players so finding those shoes – as we call them ‘Grail’ shoes – can be a challenge.”

Pat laughed it off and said: “Well, I wish you good luck in your quest”

He turned to female contestant Julie and joked “do you have a big sneaker collection?’

She does not, but the third contestant up there coincidentally did.

Jamierson from Flint, Michigan said in his Q&A: “I’ve been in sneakers for pretty much all my life, 20 years.”

“I hear youre not supposed to count how many [pairs] you have but maybe 100, 150,” he said grinning and looking over at Praveen.

Pat spotted the shared interest and joked to them both: “Have you two been talking sneakers?”

The room got a little competitive and not in the game show sense.

“I think I may have him beat on a couple of pairs of shoes but I respect his collection” he added.

“Alright,” Pat could be heard saying trying to race ahead as they kept going.

Pat ended the awkward exchange and announced: “Why don’t we move from the sneaker competition to Wheel of Fortune?“

Preveen then pivoted into gameplay and got $53K by the bonus puzzle – nabbing a collection of tough puzzles.

His prize card revealed he won a Lincoln worth $45,070 – so it was quite the day for Praveen and more ‘Grail’ sneakers are in his future for sure.

“Talk about a lucky guy,” one fan tweeted.

“This dude had one helluva day!” wrote another viewer.

“Is there any money left for tomorrow’s show?” wrote a third.

“I have an old pair of rare smelly sneakers I could sell to Praveen if he’s interested,” joked a fourth – perhaps so he can keep up with Jamierson.

ONE FOOT OUT THE DOOR?

Pat previously hinted at stepping away from the game he has hosted for four decades alongside Vanna.

“It appears I may go before the show,” Pat added.

The TV star- who has received plenty of backlash recently for a controversial photo – then said: “Years go by fast. We’re getting near the end. It’s been a long [time].

ABCThe two sneakerheads started fighting over whose collection is better: ‘It’s debatable’ Praveen shaded while Jamierson said: ‘I think I may have him beat’[/caption]

Not known, clear with picture deskPat Sajak and Vanna White – the ultimate game show pair – have hosted Wheel of Fortune since 1982[/caption]