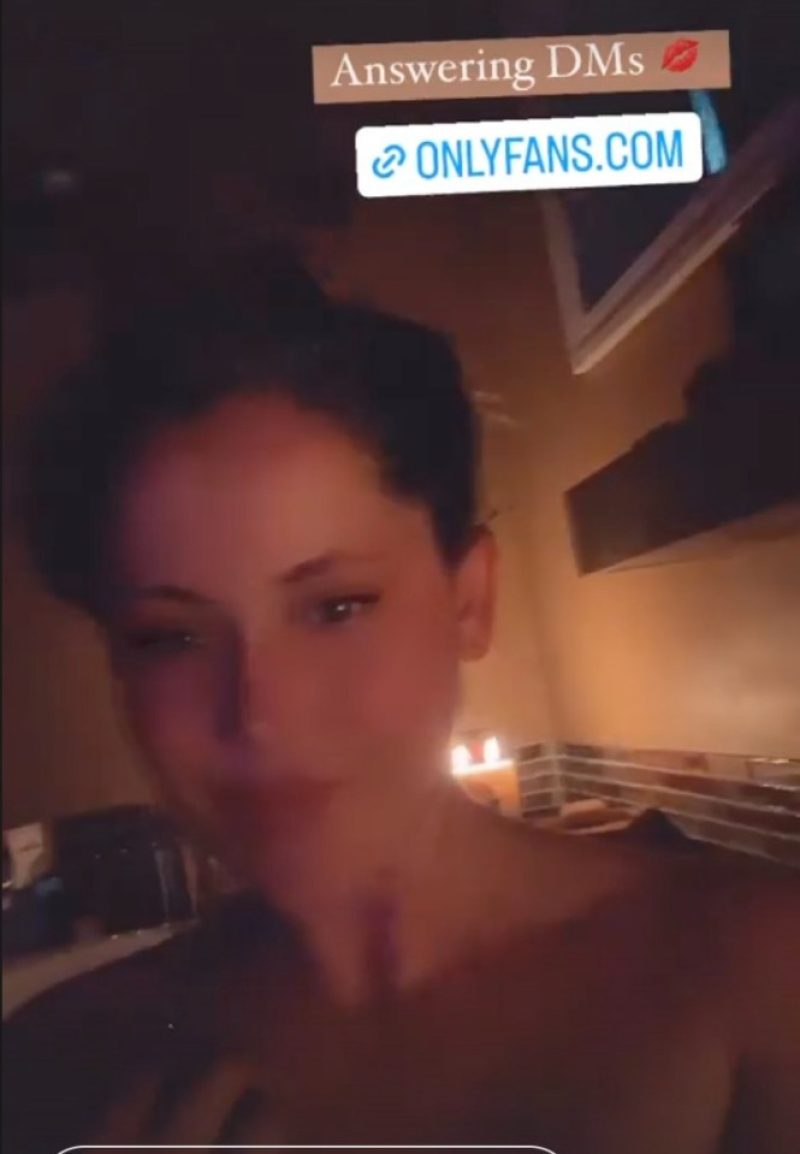 JENELLE Evans has shared a new video of herself drinking beer in the bathtub despite her current medical crisis.

The Teen Mom 2 alum has been suffering from esophageal spasms and breathing complications for weeks.

But that hasn’t stopped Jenelle, 30, from relaxing in the bath on Thursday night with a can of beer.

The reality star took to her Instagram Stories to share a boomerang of herself submerged in bubbles with a brew.

She captioned the post: “Cheers!” with the beer emoji as candles flickered in the background.

In a second snap, Jenelle gave a soft smile to the camera as she lay naked in the bath.

The TV personality nearly suffered an NSFW slip as she told her followers she was answering DMs on her OnlyFans page.

But the post came as a bit of a surprise as the MTV star and her husband, David Eason, 34, have been begging for fan prayers all week.

The reality star took to his Facebook profile on Wednesday to share a selfie with his wife from a recent vacation.

The couple smiled while bundled in beanies and sweatshirts for a hike.

David captioned the post: “Y’all pray for my beautiful wife, she’s been pretty sick lately,” with the praying hands’ emoji.

Earlier this week, the ex-MTV star shared with her followers that she had been prescribed an inhaler.

She took to TikTok to share a video of herself trying to figure out the product.

Fans flocked to the comments to share a variety of thoughts, with one writing: “Maybe time to quit smoking.”

The mom of three clapped back: “It’s not from smoking.”

Another fan chimed in: “Smoking weed does notttttt help with mucus!!! Mine was so bad when I smoked.”

Jenelle replied: “But no doesn’t help.”

She added: “Mine isn’t from smoking. I was cleared by my lung doc for that.”

The North Carolina native has been open with fans about her medical woes.

She recently shared a scary update that got her followers buzzing, with many fearful for her.

The Teen Mom 2 alum has, in recent days, asked for prayers from fans as she faced chest pain and other difficulties.

Earlier this week, she shared the same video of herself learning to use her inhaler but on Instagram with a question box.

The TV personality asked her fans: “Do you use this inhaler? If so, what for?” allowing them to respond in a question box.

“I didn’t know you had asthma,” one replied, to which Jenelle said: “I don’t have asthma. It’s complicated but I’ll explain soon.”

Another fan answered: “We used something similar for our COPD and asthma patients.”

Jenelle answered: “I don’t have either. I am being tested for other things at the moment.

“I have a high level of laden lipid macrophages. Causing too much mucus,” she revealed.

A third fan replied: “Yes! For Eosinophilic disorder,” to which the Teen Mom star responded: “That’s what he thought I had but I don’t so now we turned to genetic blood testing.”

The star told fans she’s been dealing with esophageal spasms, which are painful contractions of the muscular tube connecting your mouth and stomach.

Jenelle has been open about her medical crisis