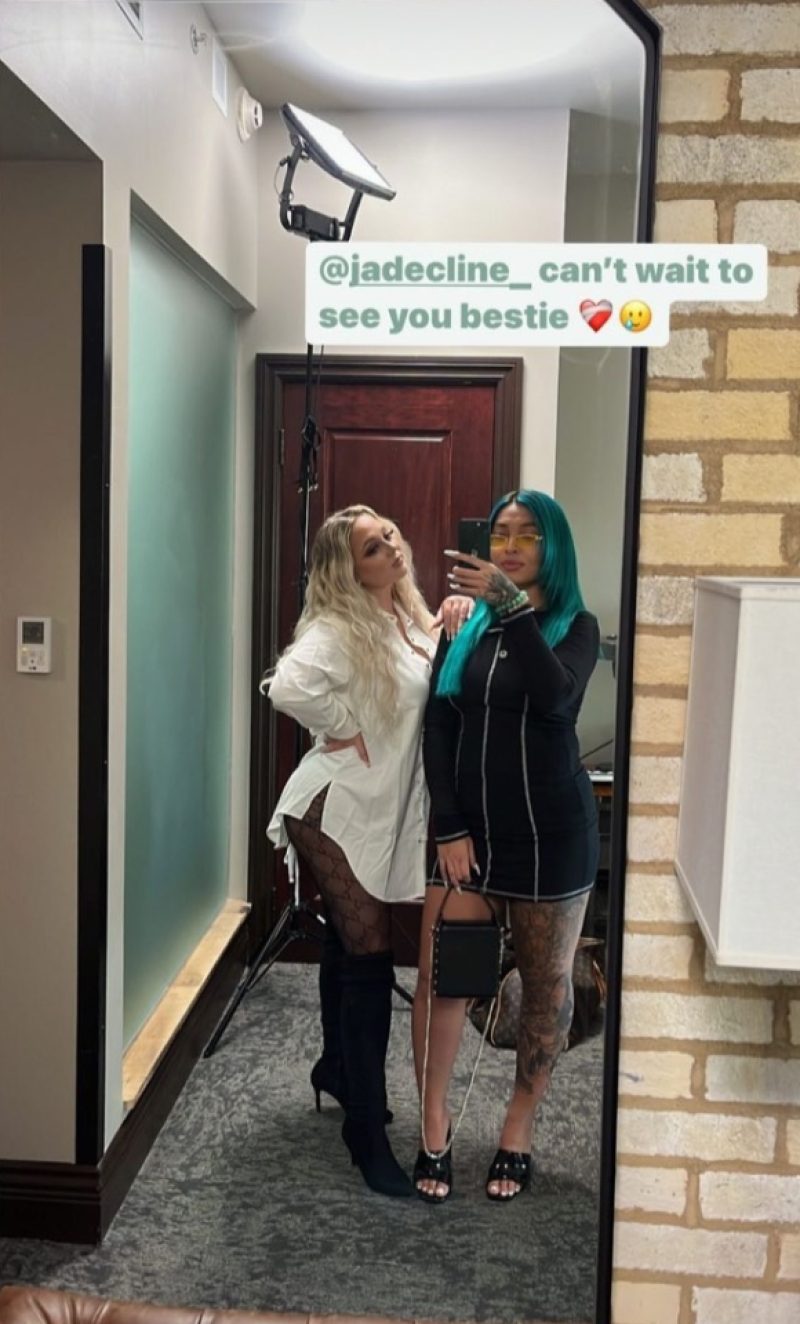 The MTV mom has been sharing increasingly sexy content as of late.

On Thursday, Jade, 25, reshared a photo of herself and her BFF Chau on her Instagram Story.

The snap appeared to show the dup posing in a mirror together.

The Teen Mom star had on a white button-down shirt and thigh-high boots but no pants.

Chau wrote, “@jadecline_ can’t wait to see you bestie,” to which Jade replied, “same!!! I miss you.”

The reality TV personality has been wowing fans with her sexy looks as of late.

Recently, she shared a series of videos and snaps from a wild night out with friends.

She appeared to be riding a party bus with some girlfriends.

Jade wore a tight black top with lacy detailing around the bust.

The top barely contained her breasts.

She paired the look with tight leather pants, showing off her figure alongside friends.

Jade also draped a cropped jean jacket over her shoulders.

On a recent episode of Teen Mom: The Next Chapter, she joined her long-time castmates Leah Messer, Briana DeJesus, Cheyenne Floyd, Maci Bookout, and Amber Portwood for a girl’s night out.

The group partied at a country bar where they drank together and did line dances on the center floor.

In a crazy moment, they tried their luck at the mechanical bull, though most were unable to stay on for more than a few minutes.

When it was Jade’s turn, she hopped up on the bull, but her short shorts exposed the bottom side of her butt.

Producers were forced to blur the scene out to escape the NSFW moment on TV.

The star’s cast mates laughed as she struggled to stay on and eventually slipped right off onto the bouncy bottom of the bull.

She got sexy yet again as she celebrated Halloween.

Days after the fun ended, she shared a video of her dancing with her friends while rocking a tight black bodysuit, nearly exposing her breasts in the outfit.

Meanwhile, fans have been buzzing about Jade for other reasons as well.

Recently, she sparked chatter about a possible second child with fiancé Sean Austin.

During an Instagram Q&A, the MTV star was asked: “Do you plan to have more kids?”

She didn’t shy away from the question, revealing her and Sean’s baby plans.

“After the wedding, we want to start trying for our second!” she wrote.

Jade also shared some details about her upcoming big day.

She posted photos from an engagement shoot on Instagram, revealing in her caption: “I’ll be Mrs. Austin October 6th 2023. Can’t wait to share this journey with you guys!”

Jade shared in a series of answers that she will be having roughly 200 guests, her daughter Kloie will be the flower girl, and they’re heading to Turks and Caicos for their honeymoon.

She also told fans that they plan to invite most of the Teen Mom cast to the big day, but didn’t name any names.

Asked, “Will your wedding be on MTV?” she responded: “You’ll have to watch to see.”