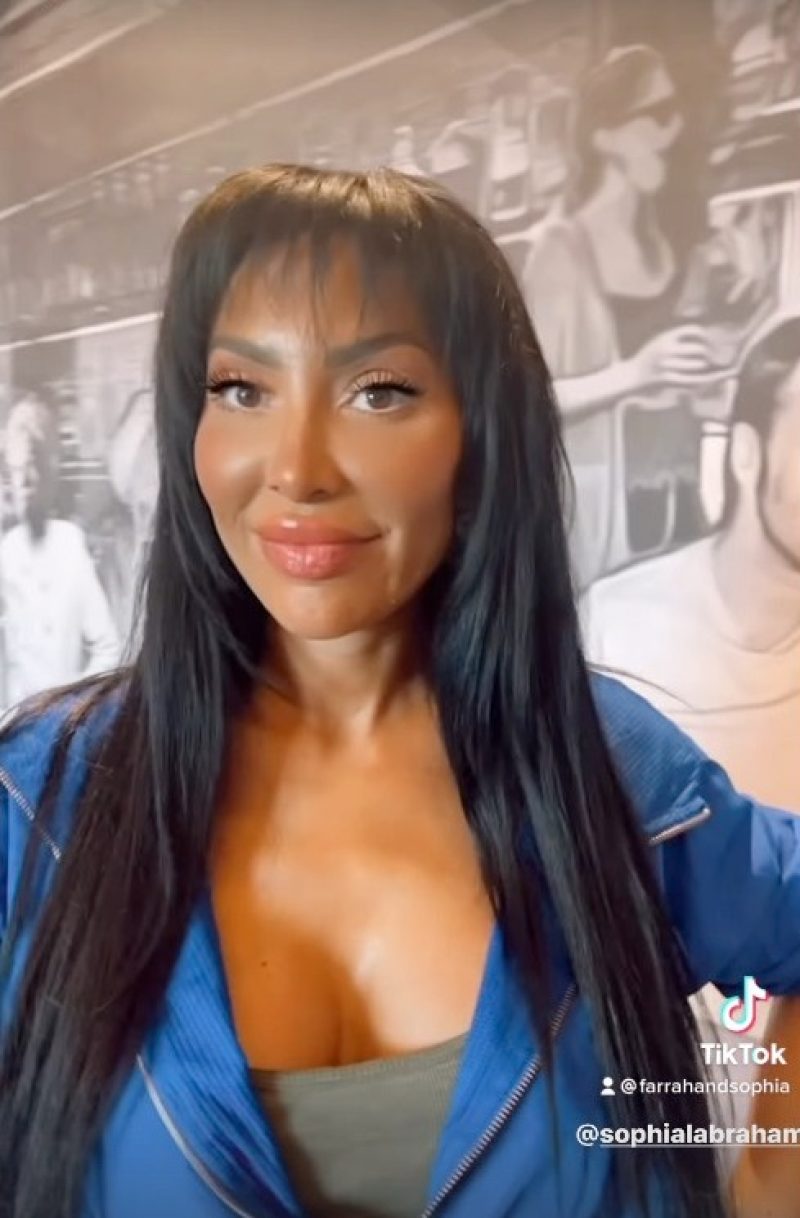 FARRAH Abraham has completely transformed her look with a shocking new hairstyle.

Now Farrah, 31, has changed her look even more by dying her hair jet black and cutting her bangs into choppy layers.

The reality star took to her Instagram Stories on Thursday to debut the new style, sharing a sultry selfie with her fans.

The TV personality posed in a blue zip-up jacket that showed off her cleavage as she gave the camera a soft smile.

Farrah’s black hair was a shocking contrast to her previous blonde balayage look, and her edgy bangs added an alternative flair.

The mother of one captioned her post with the hot and sweaty emoji.

In a second post, the MTV star filmed herself talking to her daughter Sophia, 13, with a heavy makeup filter on her face.

“I have better goth makeup than Sophia right now. Snapchat best!” she shrieked, showing off her black locks.

Farrah also shared a TikTok that was filmed by her teen, as the little girl debuted her mom’s new look.

“Okay, guys I have a big reveal. Mom was really mad at her blonde hair last night and she woke up a whole new person,” she explained.

Sophia then turned the camera to show off the Teen Mom alum’s brand-new hairstyle as she posed in a restaurant.

The big transformation came amid fan claims that the explicit model has gone “too far” with her plastic surgery enhancements.

Earlier this week, the young mom left fans shocked after sharing a photo of her very first driver’s license.

Farrah took to Instagram on Wednesday and posted a snap of her old identification next to her most recent license.

She captioned the post: “To see the me that had to take her drivers test over 4x because I didn’t know that mental struggles were separate from physical.

“I just thought I was a ‘late bloomer’ to now seeing the me today who knows mental health, understands she has type #ADi who now helps her daughter study for her own first drivers test.”

She continued: “I now know I have #ptosis which affected my drivers test, i just love I have the education and words!

“I now can see not only in me but others dna differences within shining outward. I love knowing I can help me and others. #selfcompassion #driverslicense #driverstest #mentalhealth.”

Farrah’s 2.9 million followers were shocked at how different she looked from her original photo.

One harsh fan asked: “Who is the person on the left? She’s pretty,” while another claimed: “You were so pretty back in the day. You’ve done too much now.”

A third begged: “Please stop with the treatments,” and a fourth added: “Don’t even look like the same person.”

Someone else asked: “Wait, is this the same person in both pics?” and another commented: “Soo much prettier before all the surgery.”

Other Instagram users were confused by Farrah’s caption as one person said: “This makes no sense at all…..”

“What the eff did you just say?! I can’t follow…” someone else asked, while another claimed: “That sentence needs some work.”

Last week, Farrah was ripped by fans for ruining her face with fillers and injections as she appeared nearly unrecognizable in a shocking new video.