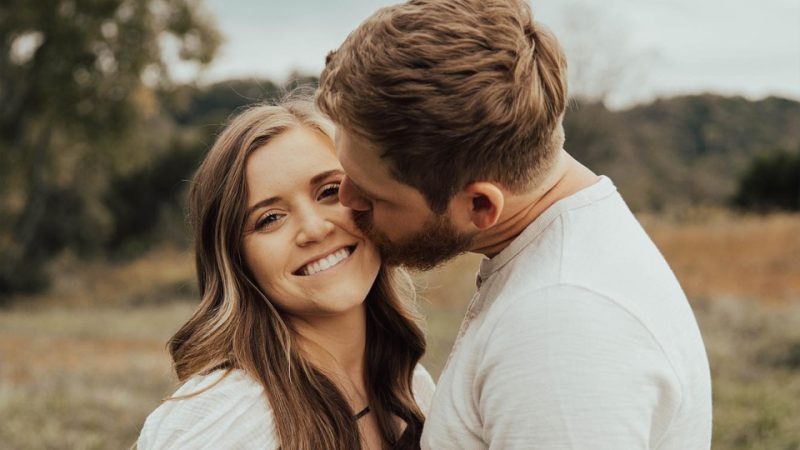 JOY-ANNA Duggar and her husband, Austin Forsyth, have shared with fans the gender of their third child.

The couple posted a new video of their huge reveal.

Joy-Anna Duggar and her husband, Austin Forsyth, have revealed the gender of their third child togetherThe couple embraced upon learning the sex of their baby

“Austin built the dart board, Aunt Jana, set up all of the balloons and we had so much help with the party prep!” the pregnant star wrote under the exciting clip on YouTube.

The Counting On alum added: “This was the most fun gender reveal party I’ve ever been to!”

Before the reveal, 25-year-old Joy-Anna asks various loved ones what gender they think the baby will be, as even her father, Jim Bob, makes a rare appearance.

“I think it’s a… girl!” Jim Bob, 57, guesses before his wife, Michelle, also adds that she believes it is a girl.

Later on in the clip, Joy-Anna’s family and friends gather up for the big reveal which featured the young pair throwing darts at various balloons filled with either blue or pink powder.

At the end, the crowd noticed there is more blue than pink, as blue confetti is then shot into the air and Joy-Anna and Austin embrace.

Following the reveal, Joy-Anna, Austin, and their loved ones all celebrate at the pregnant star’s home.

“I just want to say that I am completely shocked,” Joy-Anna said while in private with Austin, 28.

She continued: “I convinced myself that it was a girl- Austin thought it was a girl. And I was waiting for two of those balloons to be pink, and they weren’t… that’s crazy!”

“Anyways… I’m so happy,” Joy-Anna added before asking Austin if he wants to add anything.

“I’m just in shocked…” Austin chimed in. “I’m so grateful… if it was a girl I’d be just as happy, but I’m really glad [my son] Gideon is going to have a little brother.

The gender reveal comes just a week after Joy-Anna revealed new sonogram photos of her baby- and her rarely-seen sister Jana joined her for the special moment.

Jana, 32, had not been seen on social media since March when she showed off a home renovation project she was working on.

Previously, Joy-Anna and Austin shared a video from the emotional moment when they learned they were expecting.

The ex reality stars cried together after Joy-Anna took a pregnancy test, which was positive.

Joy-Anna took to YouTube to share the video, which began with the soon to be mom-of-three alone in the bathroom during a trip to Alaska.

“I think I might be pregnant. We’ve been trying and I’m really excited if we are. If we’re not, that’s fine too,” she said to the camera.

She continued: “… We’ve been trying and we’re both ready to have number three.”

Austin then jumped in, and said: “Or maybe number three and four. That would be a lot of work.”

Joy-Anna then began to cry, leaning on her man, as she explained: “We’re at a really good spot right now. We love our family. We’re ready to expand and so we’re really, really hoping we get pregnant. It’d be great if it was twins. It’d be fun…”

Later on, after learning of the positive test, Joy-Anna sobbed and hugged Austin, who was sitting next to her.