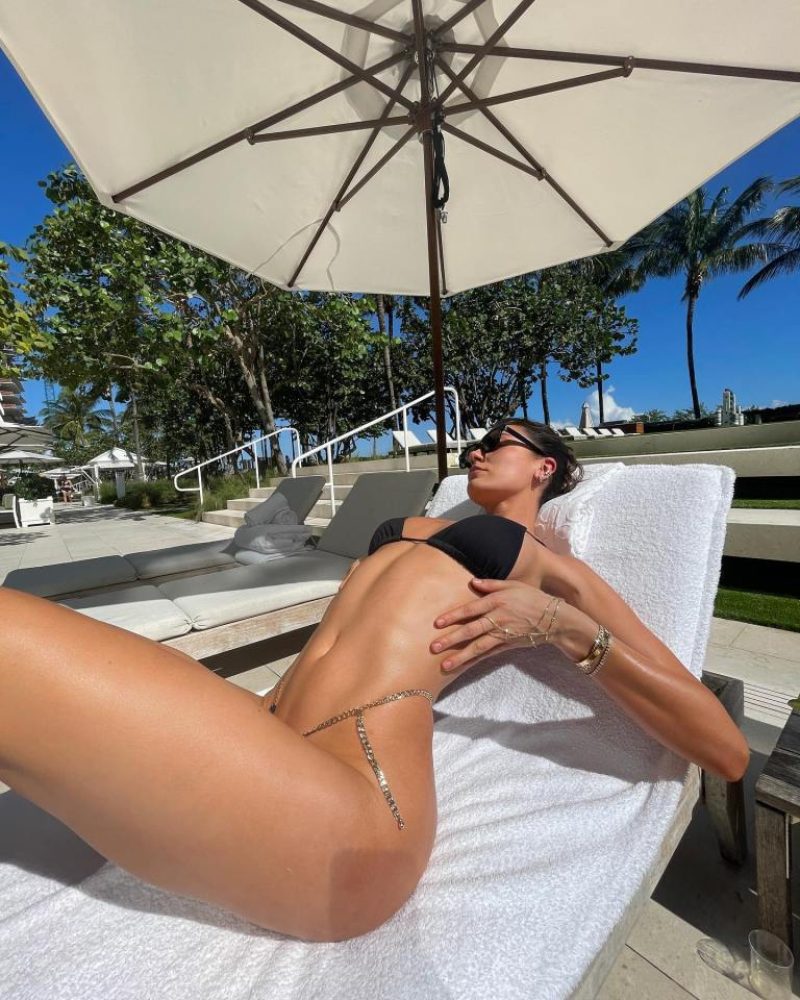 RYAN Seacrest’s girlfriend Aubrey Paige has flaunted her fit figure in a teeny tiny bikini while on vacation.

The Live host and his much-younger love interest recently celebrated her 25th birthday together.

Now Aubrey has ventured to Miami for a sun-soaked vacation as she took to her Instagram profile to share bikini pics from her hotel.

The model showed off her fantastic figure in a simple black bathing suit with gold chain detail as she posed for a picture beside the pool.

Later, the social media star indulged in a massive taco spread as she did a “happy dance” during her meal.

For a final pic, Aubrey cheered a massive coconut cup while enjoying the ritzy resort.

She captioned her post: “Hot girl summer doesn’t just stop in September…. It’s a mindset. A way of life if you will…. And it lasts all year round over here.

“P.S. get you a girl who knows how to EAT and happy dance while she does it.”

The celebrity couple shared a steamy kiss on camera despite otherwise remaining fairly private about their relationship on social media.

The Instagram model took to her profile last week to share a series of photos from her special day.

In the first image, she posed for a smiling shot outdoors to show off her natural beauty and wavy brunette locks.

In the third, she cheered with friends and family, and in the final pic, Ryan leaned in for an intimate kiss with his girlfriend.

The pair smooched in front of three small pizzas and a candle lit in honor of the birthday celebration.

Aubrey captioned her post: “Better late than never… THANK YOU to everyone who wished me a happy birthday last week.

“I tend to naturally disconnect from my phone during memorable moments and my 25th was definitely one for the books spent with family and loved ones while also getting to meet childhood idols like @thehughjackman & @danielradcliffeofficially.”

The model continued: “And to top it all off A PIZZA BDAY CAKE (brb trademarking that one lol). Thanks again for the bday wishes! Cheers to a quarter century and Scorpio season.

Fans and friends rushed to the comments section to gush over the birthday girl and her TV star man.

Ryan and Aubrey have remained fairly reclusive regarding their relationship on social media.

Earlier this month, the radio star shut down his co-host Kelly Ripa after she asked an intimate question about his girlfriend.

During a broadcast of Live With Kelly And Ryan, the 47-year-old explained that he stayed at his parent’s house at the weekend.

Ryan said he and Aubrey debated staying at a hotel, but ultimately decided to stay with his parents.

Kelly grew quiet, before turning in her chair to face Ryan, raising her hand and saying: “Question.”

Sensing her mischievous tone, Ryan looked hesitant and warned: “My mother may be listening.”

Kelly went on: “This is why I’m going to ask it in a way…

“If you travel with a companion, does your traveling companion also stay in the bedroom?”

Ryan winced, before responding: “These days, yes. But we had to work my mom up to that.

“That was not in the way in the early years, in my twenties and thirties.”

Ryan then had his mom Constance dial into the show live.

Kelly said to her: “When my adult children come home with their significant others, where should they sleep?”

Constance said firmly: “Well, in separate rooms for sure.”

Ryan laughed and joked awkwardly: “Clearly someone made a mistake over the weekend and I apologize. Hopefully, I get invited back.”