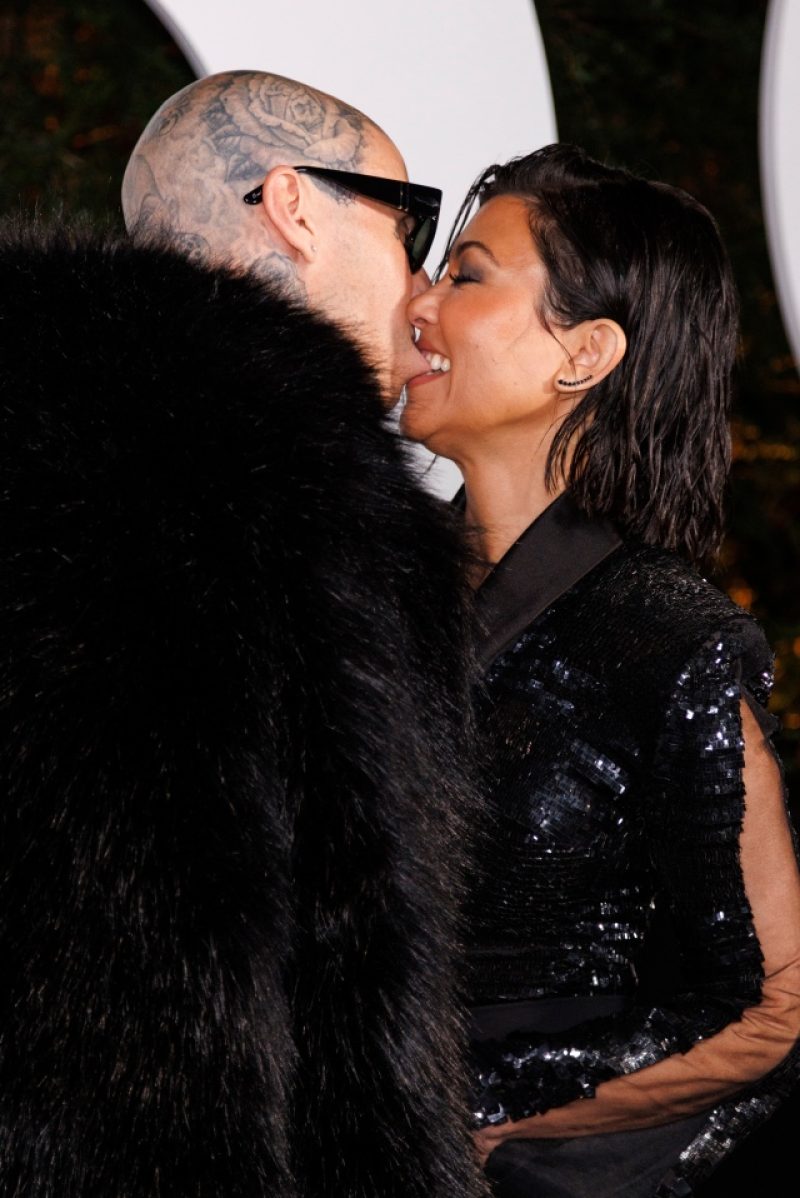 KOURTNEY Kardashian has put on yet another very public display of affection with her husband Travis Barker.

The loved-up couple attended GQ’s Annual Men of the Year party in West Hollywood, and at one point, Kourtney was seen biting Travis‘s lip.

The Blink 182 drummer was dressed in black leather trousers, a floor-length black faux fur coat and wore a leather biker jacket underneath.

Opting to go shirtless for the event, Travis showed off his heavily tattooed chest and accessorized his look with a pair of black sunglasses and a silver spiked chain.

Kourtney, 43, matched her husband in the style stakes and also opted for an all black ensemble.

The mom-of-three wore a daring black see-through bodysuit that showed off plenty of cleavage and featured oversized sequinned sleeves.

Kourtney teamed it with a pair of high-waisted tailored trousers and a wet look hairstyle as she held hands with Travis on the black carpet.

Before the duo were joined by Travis’ son Landon Barker, Kourtney was pictured biting Travis’ lip as they kissed in front of the cameras.

However, they kept it fairly sensible once 19-year-old Landon joined them for some photos.

The musician, whose mom is Travis’ ex-wife Shanna Moakler, wore an all-black outfit too and followed in his dad’s footsteps by going shirtless for the star-studded occasion.

The trio’s outing comes just days after Travis celebrated his 47th birthday on November 14 when Kourtney threw a surprise party for him.

The Kardashians star organized a huge bash for the rocker at his favorite vegan restaurant, Crossroads Kitchen, in Los Angeles on Wednesday.

The couple was joined by their kids – including Kourtney’s three kids, Mason, 12, Penelope, nine, and Reign, seven.

However, it looks like none of Kourtney’s four sisters made it to the packed-out event.

There was no sign of Kim, Khloe, Kendall, or Kylie at the lavish party – amid rumors that Kourtney has distanced herself from her family in recent months.

The restaurant was decorated with hundreds of black and silver balloons and red drapes across the ceiling.

Travis was presented with a black birthday cake with the words, “family loyalty respect” written on the top in white icing.

Earlier that day, Travis, Kourtney, and their children all jetted to Tennessee to stay at a luxury log cabin in the woods.

The family enjoyed an action-packed day of ziplining in a forest, before heading home and toasting vegan smores on a log fire.