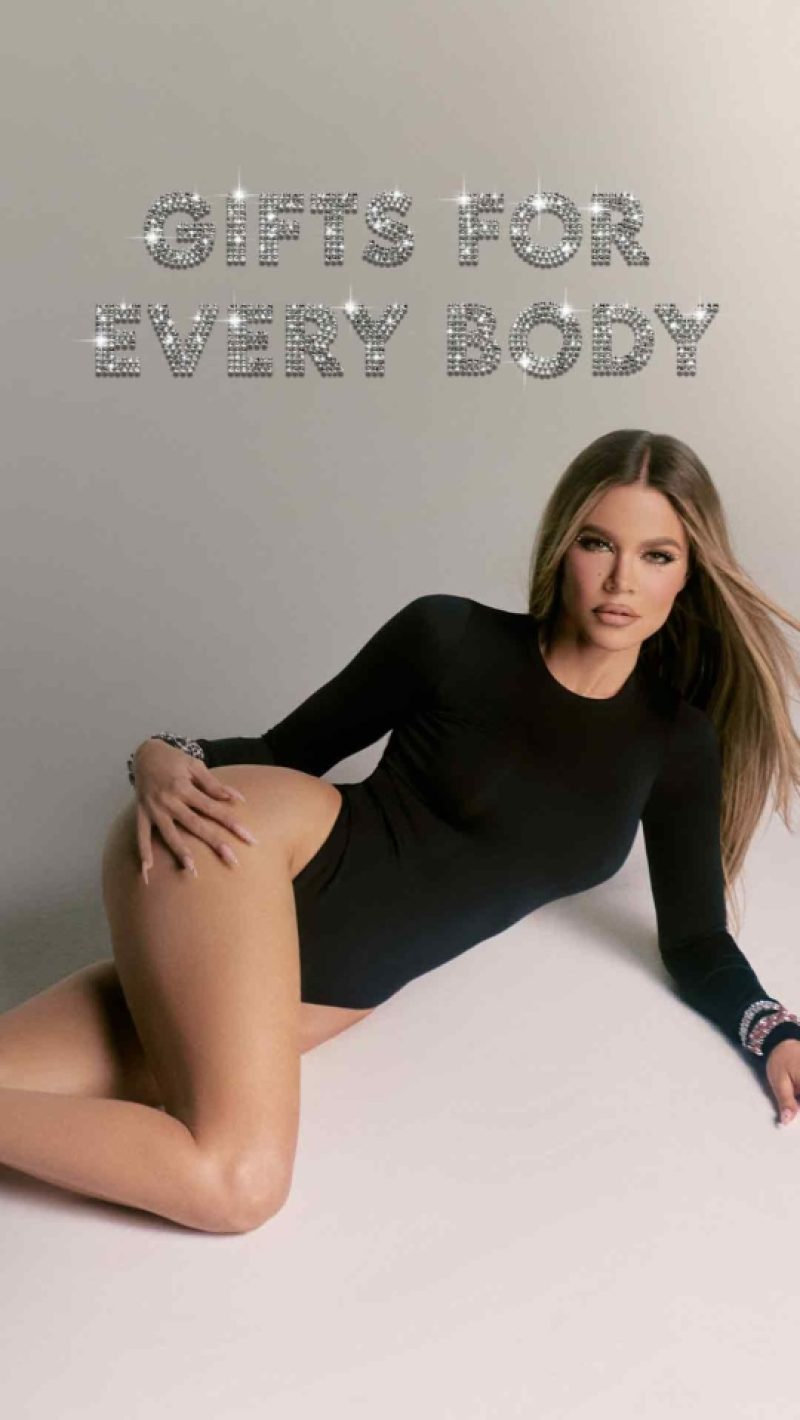 KHLOE Kardashian has shown off her pin-thin legs and tiny waist while wearing a black bodysuit for a new photo.

Kardashian fans have continued to express their concerns regarding the Hulu star’s drastic weight loss.

Khloe, 38, shared the bodysuit photo on her Instagram Stories Friday as part of a holiday ad campaign for her Good American apparel brand.

The post was captioned, “GIFTS FOR EVERY BODY,” a play on the word “everybody” as the apparel brand aims to include all body types.

The photo shows the Keeping Up With the Kardashians alum lying across the floor while wearing the longsleeved black bodysuit with her pencil-thin legs on full display.

The Good American founder smolders at the camera, the rhinestones around her eyes complimenting the jewelry around each of her wrists.

Yesterday, Khloe flaunted her slim figure in a sweat-inducing gym photo where the LA native flexed her arms and shared her workout experience in an Instagram Story.

The Kardashians star pulled her blonde hair tightly back as she donned black exercise gear.

Khloe appeared to be sitting down while pointing the camera at the exercise equipment behind her.

The reality star claimed she was in “beast mode” as she tagged the Donamatrix Tainning boutique in her sweaty post.

Khloe’s skinny arms stand out as her weight loss journey has been a major topic of discussion among fans.

There have been several instances during the year where Khloe flaunted how thin she has become.

While the reality star appears to be getting smaller, followers theorized Khloe has been exercising to distract herself from the heartbreak of Tristan’s infidelity scandal.

The birth of her second child coincided with the shocking news of her ex Tristan’s secret love child.

The Good American founder and the Chicago Bulls player welcomed their second child via surrogate in August.

The NBA star fathered a love child with his former mistress Maralee Nichols, 31, last year while he was supposed to be in an exclusive relationship with Khloe.

Although Maralee gave birth to their baby boy in December 2021, she claimed that Tristan has still not met their eight-month-old son, Theo.

This is the closest look fans have had at her son since Khloe finally revealed his face during the second season premiere.

In a tender moment, viewers saw Khloe dressed in pink and holding her son at the hospital.

The TV star said she was finally getting ready “to start the healing process” after the emotional roller-coaster ride.

Khloe and Tristan have not announced the name of their second child as of yet.

Before the season two finale though, the TV personality teased her son’s name in the most recent installment.

Matriarch Kris Jenner, 66, and sibling Kim Kardashian, 42, visited Khloe at her Calabasas mansion and spent time with the newborn baby.

When the toddler started crying, Khloe passed him over to his grandma, who cuddled the baby on her shoulder.

In a confessional, Kris gushed over her twelfth grandchild and cheered: “Life is good.

“A new baby is magic. He’s such a blessing.”

PrevPreviousKim Kardashian busts out of low-cut top as she responds to sister Khloe’s savage dig at her in new pics
NextJeopardy! finalist Andrew He shades Amy Schneider for blocking tournament win exactly one year after she first beat himNext