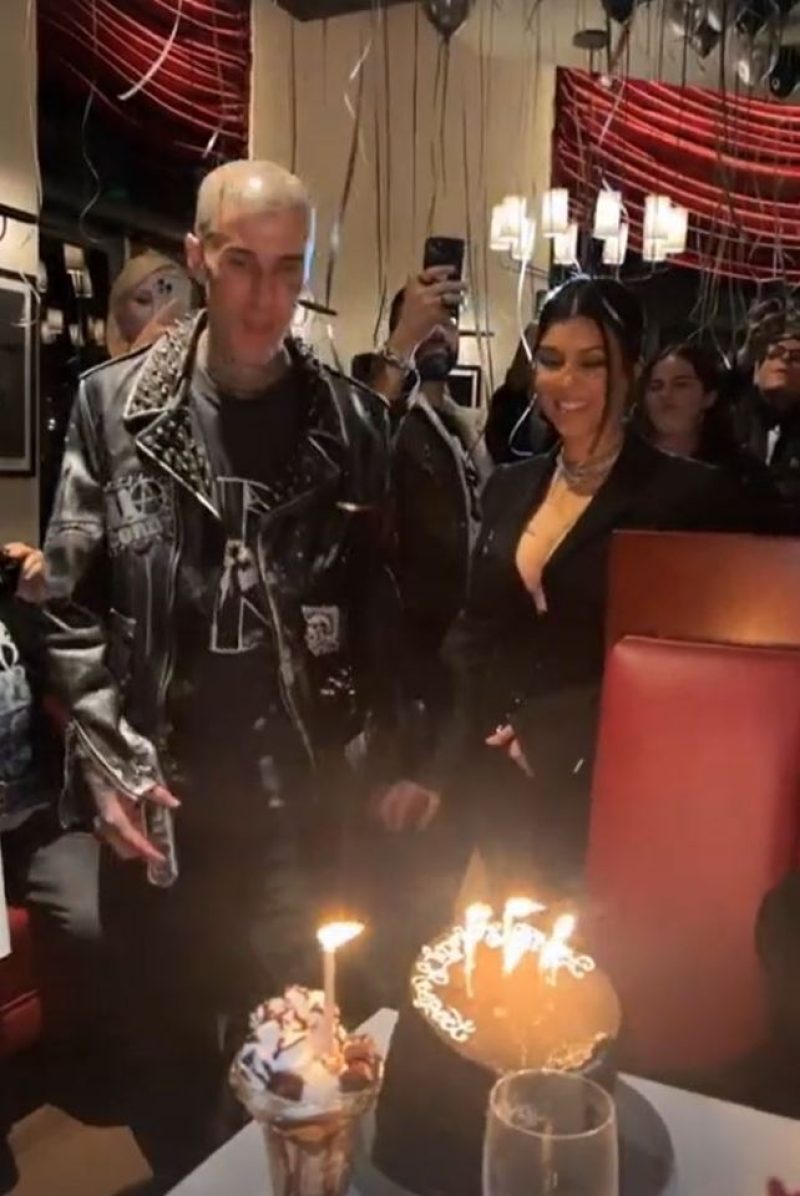 Addison Rae, 22, was spotted in the background in an Instagram video showing the rocker celebrating with his wife Kourtney and friends.

The video, posted to a popular Kardashian fan page, shows Addison watching in the background behind Travis and Kourtney, 43, as the rocker blows out the candles on his birthday cake.

As Travis, 47, leaned forward towards the cake, eagle-eyed fans noticed Addison in the room.

One fan wrote: “Addison at the back.”

Another typed: “Addison in the back. I need Kourtney and Addi to be friends again OMH.”

PDA ALL THE WAY

Kourtney and Addison reunited this past Spring for a photo shoot.

Kourtney’s lifestyle brand Poosh shared a photo of the Keeping Up With the Kardashians alum sitting on the grass next Addison.

They donned serious expressions, as the TikTok star closed her eyes while looking up and Kourtney stared directly at the camera.

Text above the photo promoted an article with tips on how to workout with friends.

Addison made another appearance on Poosh’s main Instagram page.

The account shared a video of Kourtney and Addison enjoying each other’s company as they played ping pong.

The Kardashians star and Addison first became friends in 2020, when Addison appeared in a TikTok video with Kourt’s son Mason.

In August of 2021, Addison Rae made her on-screen debut in the Netflix film, He’s All That.

“We got very fortunate that it ended up working out and I’m so glad she got to join me on this,” Kourtney said in an interview with Access at the time.

“I’m very, very thankful for her.”

However, the women stopped spending as much time together around the same time things got serious between Kourtney and hubby Travis.

In an exclusive interview, a source close to Kourtney opened up to The Sun about the reason behind the pair’s sudden rift.

“They got close for a while, but Kourtney is upset with Addison for a couple of reasons.”

“Addison commented on Kourtney and Scott’s relationship and other family drama on Watch What Happens Live when she should have just deflected the questions.”

Addison had previously spoken about Scott and Kourtney’s relationship in an interview with Andy Cohen on Watch What Happens Live.

Andy didn’t hesitate to grill Addison after several media outlets reported that Scott was single again after a split from Amelia Hamlin.

When she was asked if Scott and Kourtney were “destined to be together,” the TikToker chose to respond to the question with a blunt “no!” rather than refusing to comment.