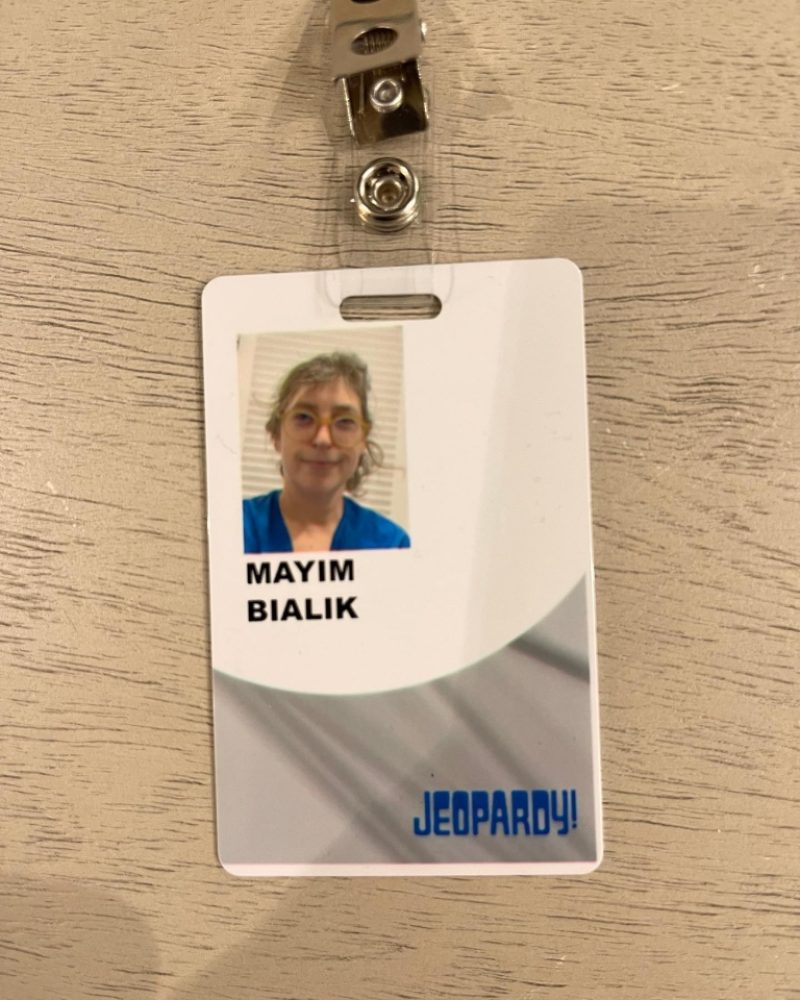 JEOPARDY! host Mayim Bialik has shared her new work ID card – and the hilarious photo she selected for the badge.

Mayim, 46, took to Instagram this week and shared a snap of the identification she uses to prove that she works on the popular game show.

Instagram/@missmayimJeopardy! host Mayim Bialik has revealed the hilarious photo she chose to be used for her work ID card[/caption]

The Big Bang Theory actress captioned the post: “When @jeopardy asks you to send a picture for your ID and you decide to be funny and send the selfie you took in the dressing room at your first ever mammogram.”

A mammogram is an X-ray picture of the breast, and doctors carry them out to look for early signs of breast cancer.

Regular mammograms are the best tests doctors have to find breast cancer early, sometimes up to three years before it can be felt.

Mayim’s 4.1 million followers thought it was hilarious and took to the comments section and praised her.

“I’m just glad to know that I’m not the only one to take the 1st mammy selfie!!” one person said.

Another wrote: “I absolutely adore you,” while a third added: “You are so great!!!”

A fourth fan gushed: “I just love you! Your humor, your passion to help others and not being fake. you rock.”

And a different follower said: “It was an important moment to commemorate, I don’t see anything wrong with it being an id picture LOL.”

This isn’t the first time Mayim has shared snaps of herself in the blue hospital clothing.

Back in August, the Jeopardy! host shared three images on Instagram as she encouraged her fans to get tested.

Mayim captioned the post: “Here’s your friendly neighborhood reminder to please get your yearly pap tests and mammograms if you’re over 40, or have a family history!!

“Fun fact about my recent visit – I somehow managed to break open the top of the gown, making it unwearable. (I tore it open like a toilet seat cover.)

“The doctor said she had never seen anyone not know how to put on a top. Guess a PhD means nothing when faced with a paper hospital gown,” she added.

Mayim had her first mammogram in 2019 at the age of 43 and when writing about it at the time, she admitted she felt “nervous”.

“She had what’s called a radical mastectomy where they didn’t even entertain the thought of chemotherapy or treatment; they just removed the breast and she never had any issues ever again.

“She wore specialty bras with a “falsie,” as she referred to it, sewn into the bra. We never really talked about it. It wasn’t a thing women of her generation even thought to speak about.”

She added: “Leading up to the day of the mammogram, I was nervous. What if I have cancer? Let’s not pretend that’s not what I was thinking. Because I was totally thinking that.

“So many are touched by cancer and it seems more and more women are being diagnosed. I was scared.”

GettyMayim has been working as a host on Jeopardy! and it’s specials and spinoffs since 2021[/caption]