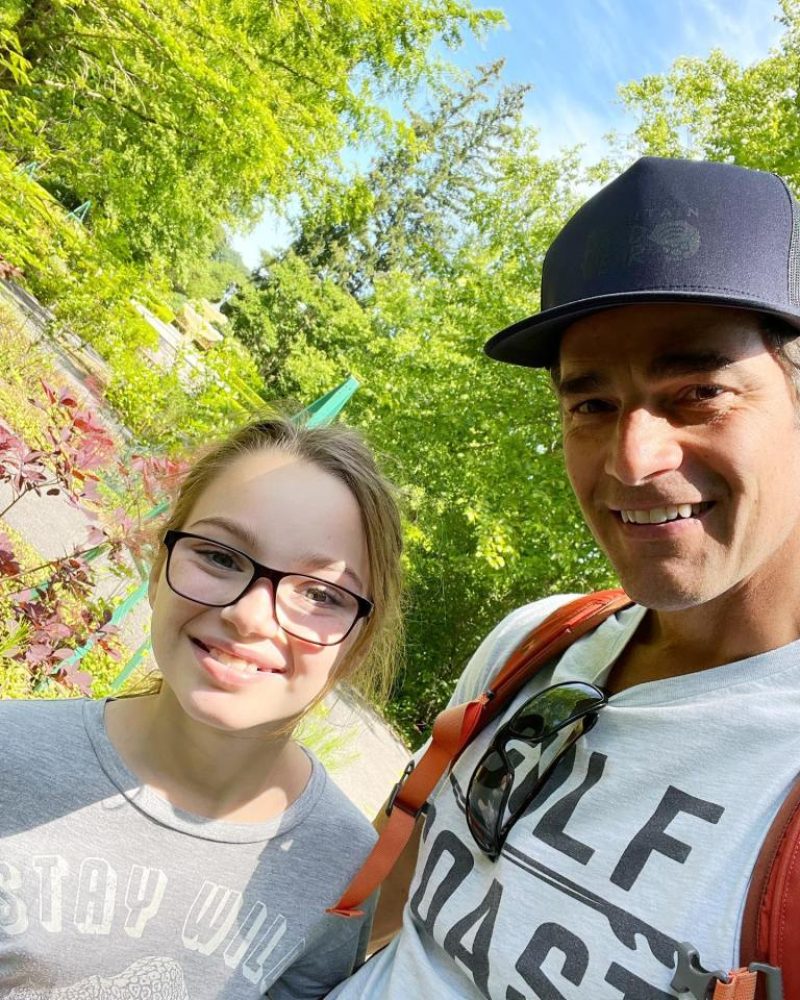 GOOD Morning American alum Rob Marciano has marked a major milestone for his daughter in sweet new photos after the divorce from his wife Eryn.

Eryn filed for divorce from the meteorologist in June of this year after 11 years of marriage and two children together.

Rob, 54, shared a photo of his daughter Madelynn celebrating her birthday on Instagram Friday.

A pair of photos showed the 11-year-old blowing out her birthday candles with a celebratory banner hanging behind her.

The weatherman captioned the post, “The birthday weekend has begun… I’m so proud of all this blossoming young lady has achieved and is becoming…this is 11.”

He then added, “Happy Birthday to my sweet Madelynn.”

Fans rushed to the comment section to wish 11-year-old Madelynn a happy birthday with one person writing, “Happy birthday to your daughter God Blessing Always.”

Earlier this week, Rob gave fans a glimpse of his off-camera life as he completed his daddy duties.

The meteorologist decided to keep warm while out driving his kids around in the cold weather by rocking some scruff on his face.

GMA fans are used to seeing the star with a bare face on TV, but he’s been switching things up lately.

On Tuesday, Rob shared a sweet car selfie with his son Mason, four.

“Tuuk time in the backseat!” Rob captioned the photo he shared in his Instagram Story.

Mason wore a long-sleeved shirt and winter hat as he smiled and stuck out his tongue while sitting in a car seat in the back.

The ABC News weatherman had just returned home after spending several weeks in Florida to report on Hurricane Ian.

Rob posted selfies of himself blowing up red balloons with his son Mason – who he shares with his ex Eryn.

The normally sharply-dressed weatherman ditched his tailored suits for a more casual at-home look, wearing glasses and a zip-down hoodie.

Mason, who wore cute patterned pajamas beamed at the camera and posed with the balloon in his hand.

Rob posted the snaps on his Instagram Stories on Tuesday, writing: “It’s a blowing up balloons kind of morning.

Rob and Mason were also joined by Madelynn the next day, with the trio laughing as they cuddled on the couch.

The meteorologist wrote: “Taking advantage of a rainy, lazy, no school Wednesday.”

Viewers have been sharing their appreciation for Rob on Instagram after he returned from his lengthy vacation to cover several weather disasters.

The hunky newly-single reporter has graced viewers’ screens to cover Hurricane Ian and Hurricane Fiona in the last few weeks.

Rob filmed the crew loading supplies onto a boat as they headed out to the island.

He explained on his Instagram Stories that he, “linked up with trauma nurses and former military to check on pine Island residents cut off from the mainland”.

They were married for 11 years before she filed for divorce.

The Sun exclusively revealed that Eryn quietly filed for separation on June 18, 2021.

The pair married in November 2010.

While speaking to PEOPLE about the ongoing divorce, Rob shared: “The last couple of years have been very difficult.

“I didn’t want this and tried to save the marriage, but we are sadly divorcing. My focus now is on my kids.”

Despite the divorce, the exes appear to be co-parenting amicably, as they took a trip to Walt Disney World with their kids over Spring Break in April, according to Rob’s Instagram.

Eryn hasn’t posted of her estranged husband since June 2021 in a Father’s Day tribute.

Instagram/robertmarcianoRob captioned the post, ‘I’m so proud of all this blossoming young lady has achieved and is becoming…’[/caption]