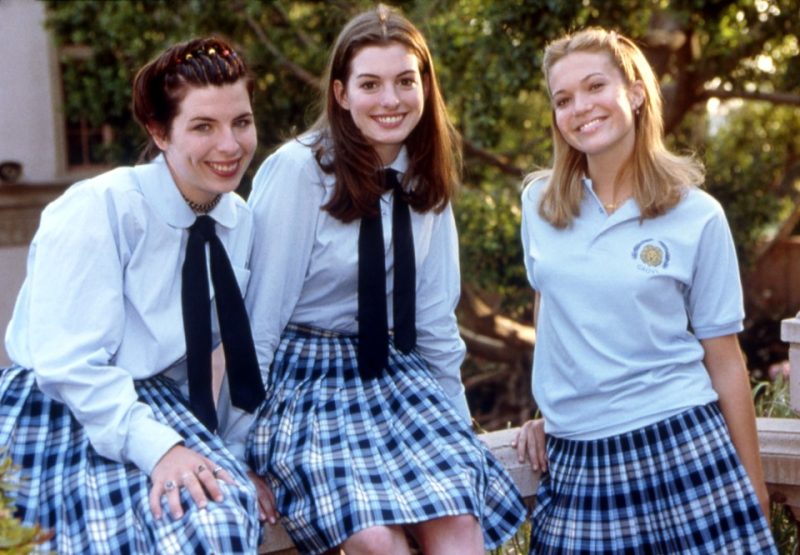 HOLD onto your tiaras – The Princess Diaries is coming back.

A third movie in the series, penned by Supergirl writer Aadrita Mukerji, has been announced – although lead Anne Hathaway is yet to jump on board.

AlamyHeather Matarazzo, Anne Hathaway and Mandy Moore on the set of The Princess Diaries[/caption]

Anne led a cast of fresh faces and established actors in the original Disney teen flick, released in 2001, and the 2004 sequel.

The film – which also starred Julie Andrews – follows a nerdy teenage girl who discovers she is the heir to the throne of a faraway land.

Since then some of the main characters have gone on to enjoy glittering Hollywood careers, while others have shied from the limelight.

From Oscars to hallucinogenic drug ceremonies, we revisit the cast and see what they’ve been up to since.

WHERE ARE THEY NOW

But after filming its sequel, the actress moved into more grown up roles in Brokeback Mountain and a magazine intern in 2006 film The Devil Wears Prada.

Recently revealed she was only cast in the fashionable role after eight other actresses turned it down.

She said: “I was the ninth choice for Devil Wears Prada. But I got it! Hang in there, never give up.”

But just as her career was taking off, she was hit by a huge set back in her love life.

Her real estate tycoon boyfriend Raffaello Follieri was sentenced to four and a half year’s jail time after defrauding investors out of $50million in 2008.

Anne had to hand back all the jewellery the Italian had bought her – and ended the relationship.

The tide started to turn for the actress after she won an Oscar for her performance as Fantine in the 2012 version of Les Miserables.

Most recently Anne, 39, starred in a terrifying 2020 remake of Roald Dahl’s The Witches and the drama Armageddon Time.

She lives in New York with her actor husband Adam Schulman and two sons, Jonathan and Jack.

She previously hinted she would be happy to make a threequel. In 2019, she said: “There is a script. I want to do it. Julie wants to do it. Debra Martin Chase, our producer, wants to do it. We all really want it to happen.”

Famed for starring as Maria in The Sound of Music, Julie appeared to have retired in 2001.

The actress had laid low after a botched operation on her vocal chords in 1997 had left the soprano unable to sing.

Julie said: “When I woke up from an operation to remove a cyst on my vocal cord, my singing voice was gone. I went into a depression. It felt like I’d lost my identity.”

Her role as Queen Clarisse in The Princess Diaries saw her return to her first Disney film since Mary Poppins – filming on the same soundstage as the 1964 film.

Andrews sang publicly for the first time since surgery in The 2004 Princess Diaries sequel. Crew members told how they cried as she nailed the first take.

Julie has since stuck to mostly voice acting with roles in Shrek 2, Despicable Me and Enchanted.

Now 87, she lives in Long Island New York and has a podcast, Julie’s Library, with her daughter Emma Walton.

Actress Heather had already starred in Scream 3, The Devil’s Advocate and indie film Welcome to the Dollhouse before playing Mia’s best friend Lilly.

She told in 2015 how she still had fond memories of the film – but admits she has struggled to find roles since.

After filming the movie’s sequel, Heather came out as gay – ignoring the warnings she was given by Hollywood.

She said: “I was told I’d be ruining my career, but what’s a career if I have to hide who I am. I remember feeling so welcomed by my fellow queers when I came out.”

After appearing in horror film Hostel II in 2007, Heather admitted she hit rock bottom after months of failed auditions.

On her therapist’s advice, she travelled to Costa Rica to experiment with hallucinogenic drug ayahuasca.

She said: “I had come to the point where I was like, if this doesn’t work, I don’t know what I am going to do.”

Earlier this year she starred in the latest Scream movie, with Neve Campbell.

Her hit Candy had already reached the top ten in the UK charts but Mandy, now 38, moved into acting with a small role in Doctor Dolittle 2.

Following The Princess Diaries she released two studio albums and took up small acting roles on How I Met Your Mother and Grey’s Anatomy.

In 2010, she voiced the role of Rapunzel in the 2010 Disney box office success Tangled.

In 2015, her six-year marriage to musician Ryan Adams fell apart after Mandy claimed the musician was allegedly emotionally abusive.

Mandy said in 2019: “His controlling behaviour essentially did block my ability to make new connections in the industry during a very pivotal and potentially lucrative time – my entire mid-to-late 20s.”

After her divorce, the starlet won a Golden Globe for Amazon Prime series This Is Us and last year released her seventh album Silver Landings.

In 2018, Mandy married Californian singer Taylor Goldsmith after meeting him after she posted on her Instagram that she was a fan of his band, Dawes.

They had their first child together – baby August – in February 2021 and a second son, Oscar, last month. She recently announced she was taking a hiatus from acting.

In The Princess Diaries she played high school vice principal Gupta who fawns over Julie Andrews’s character, The Queen.

Last year, she admitted she hadn’t seen the film since it came out on Graham Norton’s BBC One chat show.

But her character’s “the Queen is coming” line became a TikTok trend last year – with fans recreating the scene on the video app.

She won a Golden Globe and a Screen Actors Guild award in 2019 for her role as Eve Polastri.

He told E! Online: “The fickle nature of employment as an actor just wasn’t consistent enough for me.

“Luckily, simultaneously when things started to slow down in acting in my early 20s, another opportunity presented itself for me with a company that I started working with at age 25. And I’ve been with that company ever since.”

He does amateur theatre in Santa Monica, California where he lives with his wife Angela, three-year-old daughter Claire and son Thomas, one.

He said: “She’ll get quite a bit of activity on her social media that’s attributed partially toward me. It’s all very positive. I think it helps business – and she gets a kick out of it.”

Before 2004, he had starred in most of Garry’s films including Julia Roberts and Richard Gere blockbusters.

He was even nominated for a Golden Globe for his hotel manager role in Pretty Woman in 1991.

After the film he continued to work with Marshall on films New Year’s Eve in 2011 and Mother’s Day in 2016.

In 2011, he was cast in Tim Allen sitcom Last Man Standing in the US. The series – aired on Fox in the States – is currently airing its ninth and final season.

Hector, now 85, has previously said he’d like to take part in a reboot in the Princess Diaries – but with a female director after Marshall’s death in 2016.

Rex Features/Getty ImagesAnne Hathaway, Heather Matarazzo and Robert Schwartzman on the set of The Princess Diaries[/caption]

Born into a famous filmmaking family, Robert is nephew to Francis Ford Coppola and cousin to Nicholas Cage.

After the film his high school band Rooney was signed to Interscope Records and he opened for Weezer and The Strokes. The band even had a cameo in teen drama series The OC in 2004.

In the sequel Mia’s love interest was replaced by Chris Pine who played Nicholas – as Robert was busy touring.

While enjoying a music career, Robert, 39, also dabbled in directing.

He wrote, directed and starred in movie Dreamland in 2016 and released romcom The Argument last year.

But the indie director said he’d still love to take part in a Princess Diaries reunion.

Despite her American accent in The Princess Diaries, actress Caroline, 62, is in fact British-Australian.

She enjoyed a UK theatre career with the Royal Shakespeare Company before heading to Hollywood.

She was chosen by Steven Spielberg to play Moira Banning alongside Robin Williams in 1991 film Hook.

Two years later, the legendary director then cast her as Emilie Schindler in the Oscar winning film Schindler’s List.

In the Princess Diaries, she starred as Anne Hathaway’s mother Helen Thermopolis O’Connell – who kept her royalty secret from her daughter.

The actress said she looks back on her early career and feels nostalgic.

She said: “I do think the 90s was in hindsight one of the ‘golden ages’ of movie making and I was so, so lucky to be a part of that.”

In 2015, she starred with Kate Winslet in The Dressmaker and the year after in the true story A Street Cat named Bob.

She also landed a small part playing a friend of the Queen Mother, lady Doris, in the first season of The Crown.

She has now turned her hand to producing – working on the Brian Cox film The Bay of Silence in 2020.