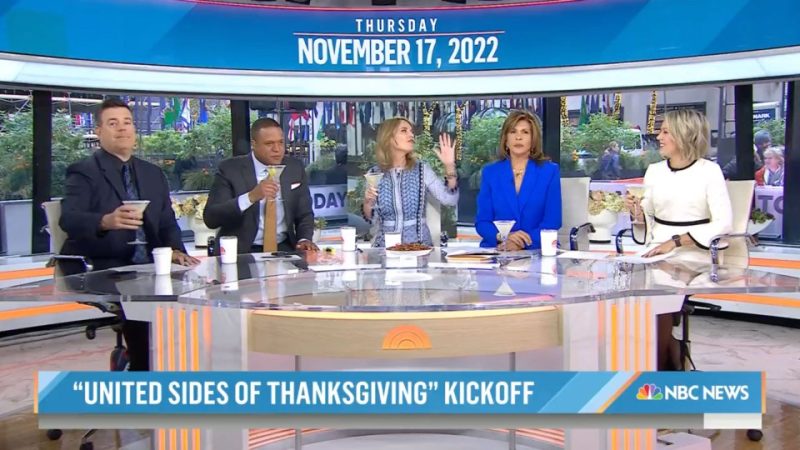 THE TODAY Show fans are absolutely thrilled after beloved host, Carson Daly, has returned to the morning show.

He was gone from the show for nearly a week without any explanation.

On Thursday, Carson finally appeared on TODAY, after being out for multiple days.

He sat at the main desk with Savannah Guthrie, Hoda Kotb, Craig Melvin, and Dylan Dreyer.

Carson led a segment on Thanksgiving sides before Martha Stewart came out with her martini for everyone to try.

The host also sat on the couch again to take his co-hosts through the POPStart segment.

Jacob Soboroff has been filling in for the 49-year-old when he was out this week.

Although, Carson did not specifically give a reason for his absence, many people speculate it’s because he has another work obligation.

He is also the host of The Voice and the show is currently filming live shows.

The Voice films in California while the TODAY Show films in New York, so it would be impossible for him to be in both places on the same day.

It seems as though Carson is coming back towards the end of the week, after wrapping up with the competition show for that week.

The two-part finale of The Voice is December 12 and 13, so Carson’s appearance on the morning show might be part-time until then.

While Carson has been out, Sheinelle Jones and Jacob Soboroff have filled in for the host.

Jacob has been a constant replacement for the host, as he filled in for him earlier this year when Carson was out for back surgery.

None of the hosts addressed Carson’s absence, except for when Savanna told viewers on Friday that “Sheinelle was in for Carson.”

Carson’s absence and return comes after he was brutally snubbed on live TV.

During Thursday’s broadcast, Craig introduced author Kevin Curry and revealed that he would be demonstrating how to turn a rotisserie chicken into three meals.

At the beginning of the segment, Kevin was heard saying to Carson: “I’ll get you a plate,” as he winked at him.

Craig then repeated: “We’re gonna get Carson Daly a plate here in a second,” as his co-host Hoda chimed in and said, “Don’t worry, we’ll share!”

When the camera panned out, 49-year-old Carson appeared to be sitting in the corner against the wall on the other side of the cooking table.

Meanwhile, Hoda and Savannah sat at the other end of the table together and appeared to be much more involved in the segment as they enjoyed plates of Kevin’s delicious-looking food.

Towards the end of the demonstration, Carson made a brief comment as he said to Kevin: “And you spent about $2 dollars doing it!” after Craig described all of three dishes.

Kevin laughed nervously and replied: “Not about $2 dollars but yes per meal, you’re averaging about $3 dollars per meal for all of this.”

Today showCarson supposedly was out this week, due to filming live shows for The Voice[/caption]

GettyHe has been the host of The Voice since 2011[/caption]

Instagram/carsondalyCarson is a regular, full-time host on TODAY, who usually leads the pop culture segments[/caption]