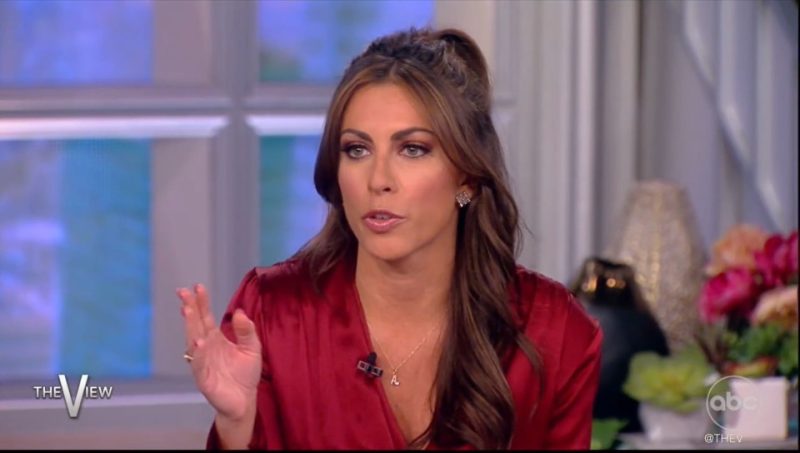 THE View’s Alyssa Farah Griffin has admitted to feeling “surprised” that the talk show was still able to air on Thursday despite facing chaos backstage.

The newcomer has revealed the show’s producers were struggling behind the scenes and everyone was feeling the pressure.

Joy Behar, who served as moderator as Whoopi Goldberg remains out with Covid, explained that Taylor fans have been struggling all week to purchase tickets to her upcoming tour.

That’s when Alyssa shared that it’s not only fans at home who have been have a hard time but also fans on the show crew.

She began: “This was like Fyre Festival. It was a full-blown meltdown.

“If you’re a Swiftie, it’s been a really rough 48 hours. There were tears in our back office.”

Sara Haines jumped in to add: “Our producer was crying”

Alyssa admitted: “I’m surprised we’re on air today, how dramatic it was!”

As a behind-the-scenes video played, Sara narrated what fans were seeing – their producer celebrating simply “almost getting in the queue” to buy tickets.

Unfortunately, Alyssa revealed, “it ended poorly” for their colleague.

“The ending of that story, she didn’t get it,” Sara said, before the camera cut to the producer giving a thumbs down.

Sunny Hostin, who recently revealed she once turned down Taylor tickets, happened to be absent on Thursday when this latest T-Swift discussion took place.

Earlier this month, the host shocked fans while revealed she and her daughter both passed up on free tickets to one of the megastar’s concerts.

As the View hosts discussed the singer, Sunny admitted: “This is one of my pop culture blind spots. I’ve never heard her music or anything.”

Sunny grasped for words and continued: “I don’t have anything to really add.”

The View host then told the story that fans deemed “savage.”

Sunny began: “She offered our team free tickets to her concert, and so she’s a lovely person.

“So I asked my daughter Paloma, do you want tickets for a friend, to go to this Taylor Swift concert, and she said no.”

Then, an audience member dramatically gasped in shock at the idea of someone turning down free Taylor concert tickets.

The panel had a laugh at the fan’s intense reaction to Sunny’s distaste of Taylor’s music.

Fans at home were also shocked at Sunny’s bold claim.

One viewer of the talk show tweeted: “Sunny and Paloma are savage.”

A second said: “Sunny’s daughter isn’t a fan of Taylor!”

Yet a third fan joked: “Yep, Sunny throwing complete shade at Taylor Swift today was on all of my Bingo cards.”

PrevPreviousWho is Snowstorm on Masked Singer? Rumors and theories explained
NextKim Kardashian’s sparkly pants nearly slip off her vanishing waist as she poses in new photosNext