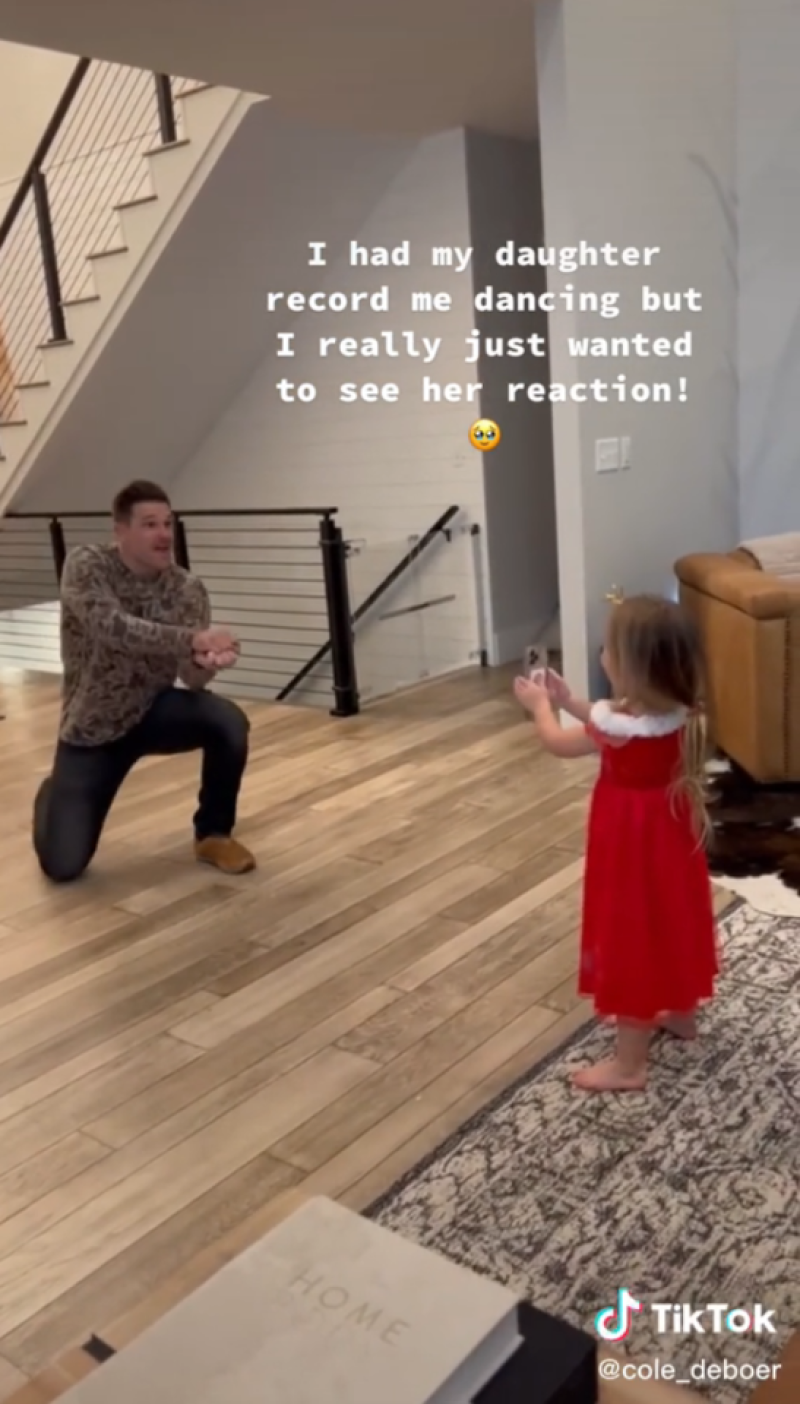 CHELSEA Houska’s husband Cole DeBoer has tried an adorable TikTok trend with his daughter Layne, leaving fans in tears at the heartwarming video.

The Teen Mom 2 alum, 33, shared a video of himself dancing in front of the four-year-old.

Cole danced to Taylor Swift’s song Love Story as Layne stood in front of him, wearing a festive red and white fur-trim dress and filming him on his phone.

The reality star danced animatedly before getting down on one knee and pretending to propose to the toddler.

As Cole opened up his pretend ring box, the camera panned to Layne’s face.

It turned out she hadn’t been filming Cole at all and had been capturing herself the whole time.

The video showed Layne beaming with delight as she watched her dad before she burst out laughing when he bent down and pretended to propose.

Fans flooded Reddit with praise for the cute video.

One wrote: “Omg she is soooo freaking adorable! She loves her daddy.”

Another added: “I cry almost every time I see this trend.”

A third posted: “One of the cutest kids that ever appeared on the show! Adorable!”

Chelsea and Cole have three kids together –  son Watson, five, and daughters Layne and Walker, one.

They live in a $750,000 farmhouse in South Dakota and have taken fans on several tours inside each of the newly-finished rooms.

The series, which is set to debut in 2023, will follow the couple as they help families renovate their own homes.

Having caught the decorating bug, the couple is currently in the middle of renovating a rustic log cabin in Nebraska.

Back in January, Chelsea gave fans a full tour of the cabin.

The home features a kitchen with an island and a big spiral white staircase leading up to a loft area equipped with two twin beds.

The cabin also has a basement with two bedrooms, a bathroom, and another living area.

While the cabin belongs to Chelsea’s father, Randy, the Teen Mom alum and her husband took it over as their second home while visiting him.

PrevPreviousSeth MacFarlane dating history: Who has the Family Guy creator dated?
NextTeen Mom Amber Portwood’s ex Andrew is furious after he’s accused of trashing her home- and ‘has proof he didn’t do it’Next