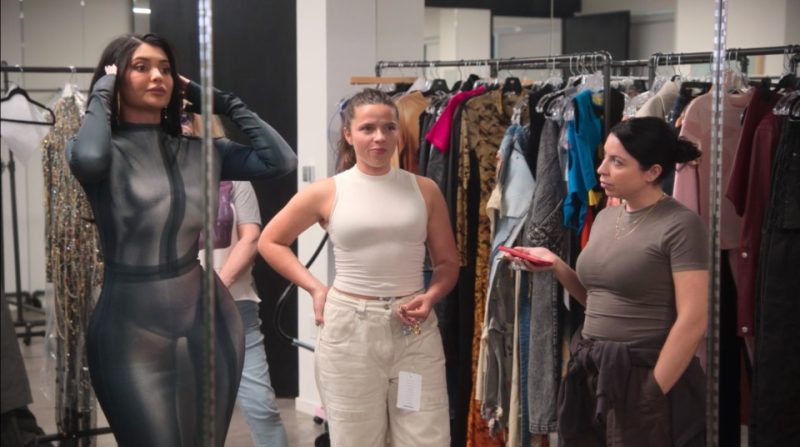 KYLIE Jenner has given a glimpse of her postpartum physique on the latest episode of The Kardashians.

The 25-year-old reality star told viewers: “These are the years that I’m supposed to be naked.”

Hulu‘These are the years that I’m supposed to be naked,’ she told viewers[/caption]

In a preview for next week’s Season 2 finale of The Kardashians, Kylie prepared to get ready for the Billboard Music Awards.

The clip saw the Hulu star trying on her outfit for the event, which she attended with her baby daddy Travis Scott, 31.

The cosmetics mogul wore a “naked” illusion Balmain dress that hugged her signature curves three months after the birth of her baby son.

The gray number gave the illusion of being see-through and emphasized her wide hips and toned stomach.

Tying on the outfit with her team, Kylie flicked her hair back and said: “I like the vibe.”

In a confessional, she revealed that she was feeling proud of her body and looking forward to showing it off on the red carpet.

“I’m still a mom, but these are the years that I’m supposed to be naked,” she began.

Kylie and Travis attended the Billboard Awards in Las Vegas in May, which was three months after the birth of their son, formerly known as Wolf.

The pair brought along their four-year-old daughter Stormi to the event.

Since giving birth, Kylie has been feeling confident about her post-baby body.

The E! alum has shown off her enviable curves on many occasions in a variety of sexy outfits.

Meanwhile, she was praised by her fans for sharing relatable photos form her post-partum journey on social media.

In the weeks following the birth, she posted intimate snaps showing her “stretch marks” and “extra weight”.

In an earlier episode of The Kardashians, Kylie told her mom Kris Jenner that she is embracing the changes to her body after her second child.

“I’m way less stressed about my weight and what I look like, and way more into the feminine energy and the fact that I made a baby,” she said.

Season two of The Kardashians concludes on Hulu next Thursday with the final episode dropping at midnight EST.