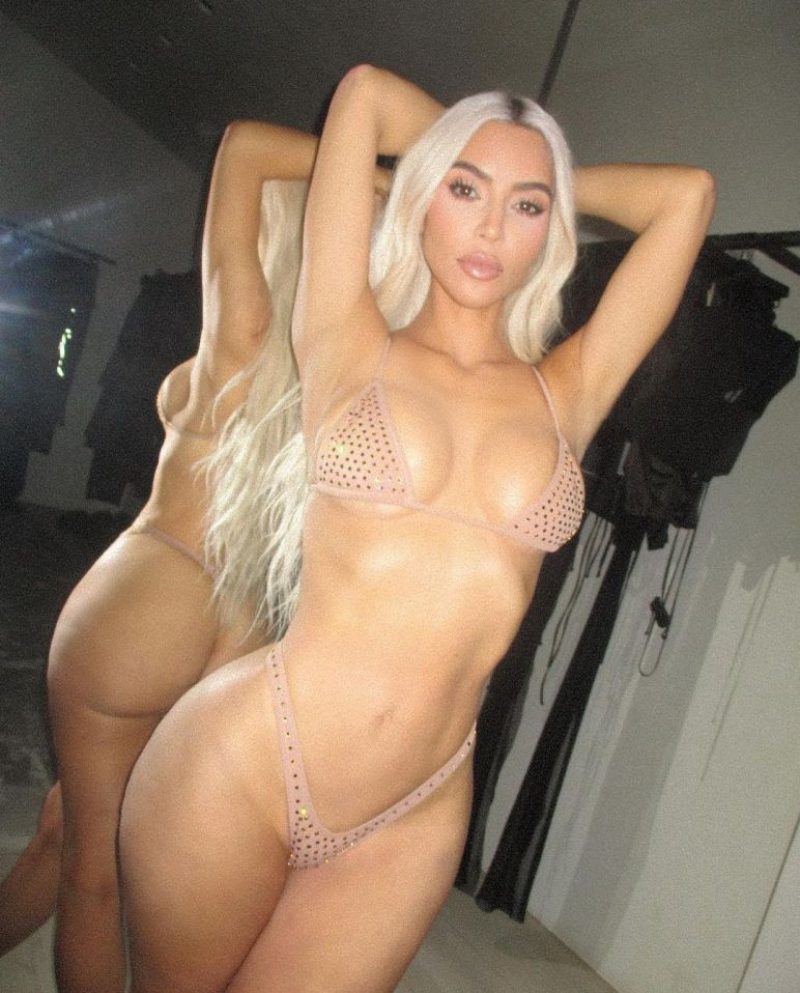 KIM Kardashian has given fans a glimpse of her bare butt yet again whilst showing off more of her new SKIMS collection.

Kim, 42, took to Instagram late Wednesday night to share some seriously sexy snaps of her modelling some skimpy underwear.

The minuscule SKIMS garments just about protected Kim’s modesty and allowed her to flaunt her washboard stomach and recent weight loss.

In a couple of the images, Kim was stood against a floor-length mirror so fans got a sneak peek at the back of her body.

Another snap saw the mom-of-four modelling the exact same luxe intimates in a nude color as she crossed her legs and held her arms above her head.

This time, Kim’s bare butt could be seen in the reflection of the mirror as the skimpy thong disappeared within her famous derrière.

She captioned the post: “S K I M S holiday shop available now,” and her fans and followers rushed to comment on it.

“So sexy,” one person said, while another wrote: “You’re so cute Kim.”

A third person commented: “So pretty,” while a fourth added: “Amazing queen.”

However, others accused Kim of Photoshopping the images and weren’t very complimentary.

“WHo ever is in charge if her photo shop needs a new profession,” one said.

“She has a thigh behind her thigh,” another person claimed.

And someone else accused: “Imagine literally editing a thigh gap into your photos in 2022.”

A different person said: “Why are you so thirsty. You don’t need to do this at your age.”

Referring to Kim’s slender frame, another follower told her: “You need to eat Kim.”

Someone else suspected that Kim was trying to get her ex Pete Davidson‘s attention after it was reported that he’s dating model Emily Ratajkowski.

Following rumors of romance between Pete, 28, and Emily, 31, a source has told UsWeekly that the pair are even closer than once thought.

“Pete and Emily have been talking for a couple months now,” the insider claimed.

The two, who have both been back on the dating market for just a matter of months, are “in the very early stages, but both really like each other,” according to the outlet.

Pete has been keeping a low profile since he split from Kim, who is also friends with Emily.

He and the reality star dated for 10 months before they called it quits in August.

The King of Staten Island, who previously dated Ariana Grande and Kate Beckinsale among others, has not been linked with many new women until now.