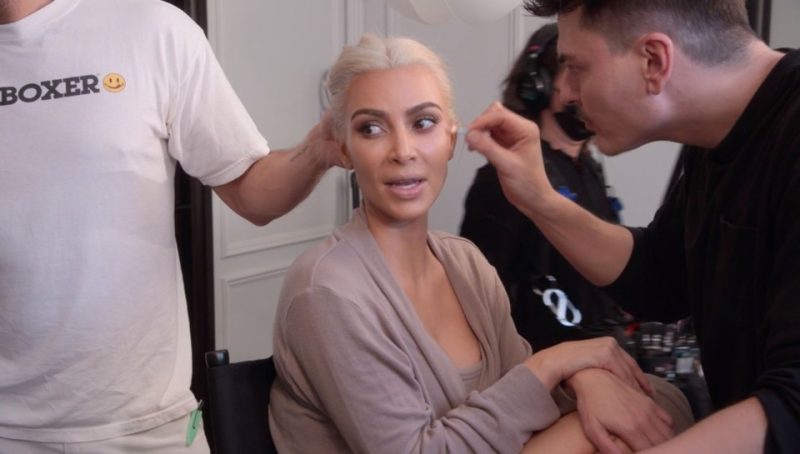 KIM Kardashian has shocked fans after unleashing her fury on family and friends while getting ready for the Met Gala in a new clip.

During Wednesday’s episode, fans watched as Kim, 42, prepared for the Met Gala.

Cameras rolled as the reality star got her makeup and hair done for the soiree, capturing her sisters as they arrived for their own glam.

The TV personality explained that Ripley’s Believe It Or Not brought several priceless items from their Marilyn collection to make a mini-museum out of her dressing room.

“We have a room, a full Ripley’s Marilyn room. They were so nice to bring her energy and her vibes.

“Her iconic beach photo shoot with the sweater, a lipstick kiss on a napkin with her hair, her makeup case.”

Kylie, 25, was filmed as she perused the items, guided by a Ripley’s representative.

But Kim issued a warning that no one could touch any of the items present.

“Ladies, don’t touch a thing in there. Kylie!” she yelled.

“Tell Kylie don’t touch a thing in there. I know you have the money to pay for it but that’s beside the point!”

However, Kim did not stop there and went on to silence the entire room as she wildly threatened her entire team.

“Wait I’m going to make a huge announcement. I will go so f**king crazy on everyone if they touch one thing in this room.

“These photographs, this makeup, it cannot be touched. The sweater. No food, no drinks, if you have to sneeze, go in the other room I’m not even joking.

“Sorry, not sorry,” she ranted.

Fans were appalled by the behavior, taking to Reddit to troll her for the extreme outburst.

“This episode enraged me,” one admitted.

“I despise these people. I need to stop watching this show because I’m physically starting to feel hatred toward Kim.

“She is yelling at people to not touch anything while SHE GOES ON TO RIP AND TEAR THE DRESS,” a second agreed.

A third complained: “The hypocrisy of Kim being concerned about anyone damaging the dress or artifacts but she is literally wearing and squeezing herself.”

“Just started the episode and Kim is so concerned with everyone potentially touching or even sneezing in her ‘Marilyn museum hotel room’ yet she’s ok with squeezing herself into Marilyn’s delicate dress,” a fourth mentioned.

“Okay Kim popping off at everyone in the room telling them not to touch was so rude. You could say that nicely to your FRIENDS and STAFF you b***h,” a fifth ranted.

“This felt like a real throw back to Kim yelling at everyone not to mess up her new house in like season 2 or something,” a final recalled.

Also during Wednesday’s Met Gala episode, Kim broke down in tears and demanded Hulu’s cameras leave the room in a rare raw moment caught on camera.

The reality star and her family celebrated together after learning the outcome of their legal battle against Blac Chyna.

Kris Jenner called Khloe and Kim Kardashian to deliver some exciting news: they had been found innocent in their legal war with Rob Kardashian’s baby mama.

The Kardashian momager and her boyfriend Cory Gamble shouted: “We f**king won. We won.”

Kim screamed and jumped with Khloe before calling other family members.

The star yelled: “The truth is on our side. Let’s sue her for our attorney’s fees now. I’ll represent us.”

Speaking directly into the camera, she said: “This was the best lesson in law school – I’m shaking right now – because you never know what a jury will really say. It’s a jury. And we had the truth on our side and I feel so good.

“I don’t want to cry right now. I really can’t ruin this makeup.”

She then got back to getting ready, ordering Hulu’s cameras out of the room as she slipped into her dress, originally worn by Marilyn Monroe many years prior.

She snapped: “No filming me changing!”

That same day, she found out that her family won the case against Blac Chyna