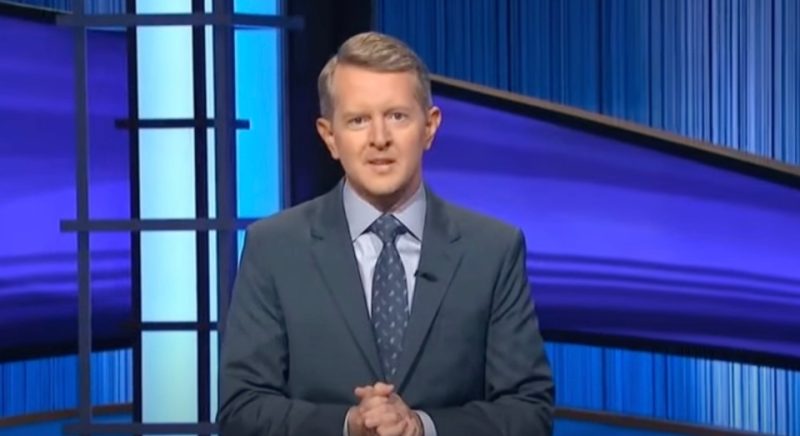 JEOPARDY! has caused an uproar after using a “flawed” and “disputed” biblical clue on Wednesday’s episode.

The first player to win three matches gets the $250K grand prize – tonight Andrew notched his second win meaning the underdog is now one away from victory.

But Final Jeopardy left people so angry that they wanted tonight’s results to be thrown out as well as whoever wrote it.

Under the category “The New Testament” it read:

“Paul’s letter to them is the New Testament epistle with the most Old Testament quotations.”

Amy got it correct according to Ken with “Who are The Hebrews.”

Sam revealed he wrote the “Who are the Romans” – this alternative was not accepted.

Ken groaned: “he wrote the Romans” and denied him the win which he would have otherwise gotten.

Andrew didn’t have the correct response with “Philippiaes” but had enough earnings to win after the new scores were shown.

Hundreds expressed how biblical texts and who wrote them are largely up for debate – including parts of The New Testament, so the question was misleading in itself.

“What a bunch of crap,” one fan wrote. “This is a terrible clue. The authorship of Hebrews is disputed. Not counting Hebrews, Romans has the most. Sam was robbed.”

A second penned: “I’m sorry but Sam should have won today and now I don’t care who wins thanks to this BS Final Jeopardy.”

“Way to go writers you have just screwed up the biggest TOC in years,” wrote a third.

Dozens more were distraught, as another put it: “This was a flawed question. This is exactly why the writers’ room needs a complete overhaul ASAP.”

“Between this and Sunday’s Celebrity Jeopardy! alligator clue, Jeopardy! needs to take a closer look at the writing,” wrote one more.

Yet another viewer said: “The TOC is officially now a sham. Congrats on the Jeopardy staff for ruining the one good thing this show still had going for it following Alex’s departure…Sam got 100% robbed on this one.

“Having any level of scholarship into the Bible would lead you astray of the ‘correct’ answer, as the authorship has been in question for centuries.”

The show claimed the epistle was written by Paul but many Biblical scholars don’t agree with this.

Wikipedia sited a book and wrote: “The Epistle to the Hebrews of the Christian Bible is one of the New Testament books whose canonicity was disputed.

“Traditionally, Paul the Apostle was thought to be the author.

However, since the third century, this has been questioned, and the consensus among most modern scholars is that the author is unknown.”

Jeopardy! writers have generally been with the show for decades and only a dozen of them if not fewer.

The shocking question made national news, and the family of Gabby Petito demanded an apology.

Ken will step aside in January so that co-host Mayim Bialik – now handling Celebrity Jeopardy! which was recently slammed for a Brian Laundrie clue – can take the reins.

Over the summer, he and actress Mayim, 46, were officially announced as the permanent replacements for the late, great Alex Trebek – the two-year anniversary of his passing was last week.