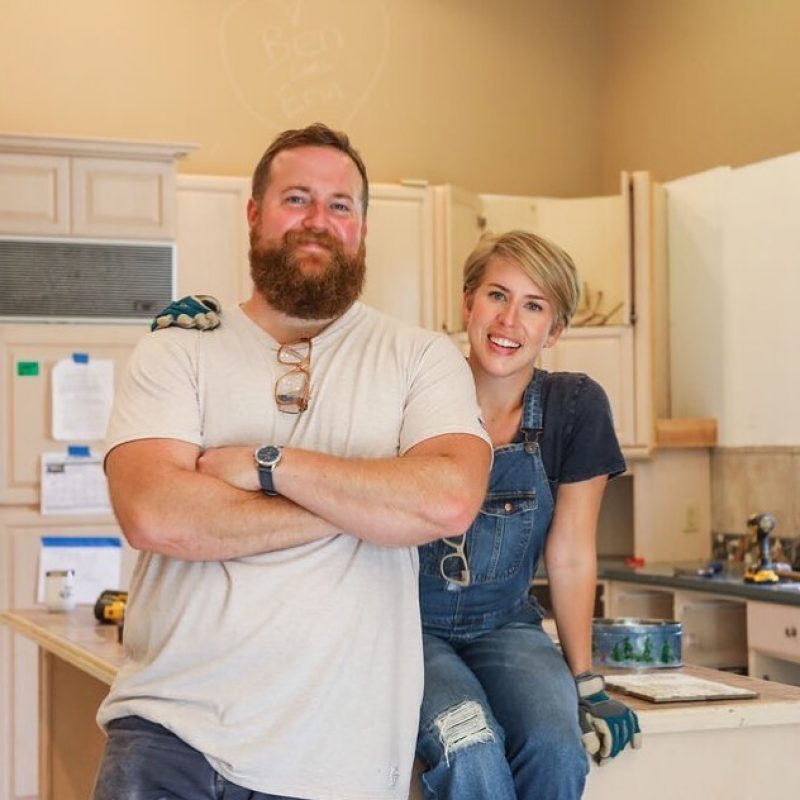 HGTV stars Erin and Ben Napier have been bringing fans into their lives and family on their home renovation show and its spinoffs.

The couple started out on Home Town together and have built a multi-series empire, expanded their family, and moved into a new home together.

HGTV fans have fallen in love with Ben and Erin Napier of Home Town fameThe pair have launched an empire, including various spinoffs

The pair have been making magic long before they were stars.

Back in 2019, Erin shared some insight into how she and her husband met with a lengthy Instagram post.

She wrote: “On December 7, 2004, [Ben] and I met in our college yearbook room about the feature story we were writing about him.

She continued: “I was design editor and for two years had noticed him, always the center of attention, everyone’s best friend, my biggest crush. December 8, we took the photos for the yearbook. December 9, we went on our first date and he met my mama. December 10, we looked at the Christmas lights in Mason Park. December 13, we decided we would get married someday. It sounds crazy to you, maybe. But it makes perfect sense to me.”

The pair got engaged in September 2007 and were married in November 2008.

They renovated their own home and then caught the eye of HGTV execs who brought them on for a show of their own.

Home Town premiered and was a huge success, showcasing renovations throughout their hometown of Laurel, Mississippi.

In addition to their business ventures, the duo have a growing family

Erin and Ben welcomed their oldest daughter, Helen, in January 2018.

The couple showed off their baby girl online, letting fans in on their life as a family of three.

They welcomed another daughter called Mae.

The couple faced their share of challenges in that time.

In January 2021, Helen was injured while playing on a playground.

She broke her tibia and fibula when “she stepped wrong at the end of a slide.

The tot had to have the leg re-broken under general anesthesia in order. to reset it.

She spent two months in a cast and was freed just about a month before her baby sister’s arrival.

Adding another child to their family added another layer of difficulty.

Erin and Ben told Us Weekly in March that Helen was struggling to adjust to sisterhood.

She told the magazine: “She’s now finding out that Mae is starting to show a personality.

“She can clap her hands, she can crawl and everybody cheers and is so excited. I think she’s starting to feel a little, like, ‘Well, what about me?’”

Erin added that Helen is “just now getting into a little bit of … jealousy.”

She maintained, however, that her oldest is “so sweet” with her little sister.

They are parents to two daughters: Helen and Mae

Erin has also faced her share of critiques as a parent.

Speaking with Us about how she deals with the trolls, she said: “I typically have a rude comment from someone and I can look at their profile and see this is a mother who has children.

“This is another woman attacking me as a woman or a mother or whatever. I like to begin with: ‘You would absolutely not speak to me this way in person. Why do you feel like it’s OK t do it here? It’s not. And this little corner of the internet belongs to me so you’re not welcome here anymore.’

“Anytime someone feels like they can be rude on my social media account, I’d like to let them know this isn’t an acceptable way to communicate and you’re not going to be welcome here anymore, and I block them.”

Their parenting has been called into question, with the couple hitting back

Erin, Ben, and their kids live in a charming 1925 Craftsman-style home in Mississippi where they’re both from.

The pair found the house while on a walk together, according to a blog post.

Erin saw the owner on her porch and told her how much she admired her home and she invited them in for a tour.

The couple told the owner after the fact that “if she ever decided to move, to please call us because we would love to buy it.”

“Not two weeks later, Mrs. Mary Lyn’s daughter called to ask if we would seriously like to buy it because she’s tired of keeping up a yard and is thinking of moving into a condo where she won’t have to worry about a thing.”

They jumped at the chance, bought the house, and started renovations.

The couple added a white picket fence, which keeps their dogs and children safe in the yard.

As they do with all the homes they renovate, they maintained much of the original charm.

Erin and Ben have started a small town revolution

In 2022, HGTV announced that Home Town would be expanding into a franchise.

The show stars more than just the couple and chronicles renovations that push renovators to enjoy all that the towns in which they live have to offer.

The premiere took place in Buffalo, Wyoming and featured Jasmine Roth and Typennington.

The couple also has another show called Home Town Takeover.

The show aims to renovate the homes of local heroes in small towns across the country.