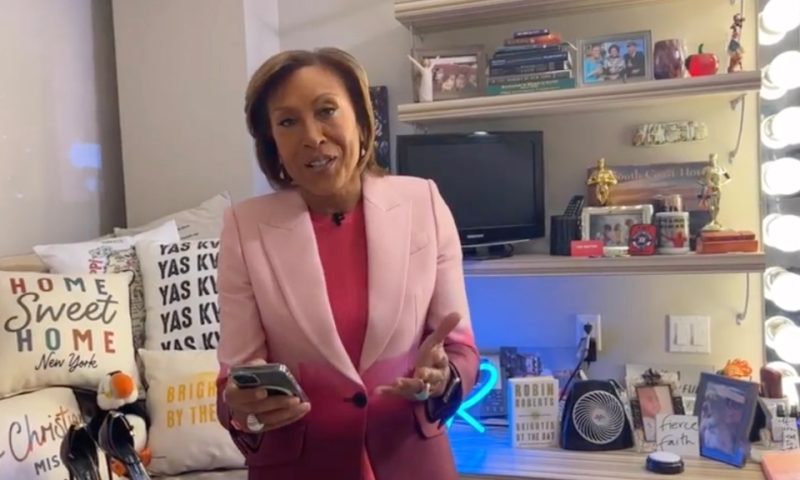 GOOD Morning America host Robin Roberts has given fans a tour of he work office in a rare behind-the-scenes look.

It is complete with designer heels, “Yas Kween” pillows, photos, and more.

ABCIt is complete with a bunch of pillows, pictures, statues, and more[/caption]

Every morning before appearing on GMA, Robin does a morning prayer and delivers a message for her followers on her Instagram.

On Thursdays, she always does Thankful Thursdays and asks what her GlamFam is thankful for.

And while she wants most fans to pay attention to the message she is telling, they couldn’t help but be distracted by the amazing items in her room.

Pillows are all lined up on the long couch next to her.

Some of them read “Yas Kween,” “Home Sweet Home New York,” “Brighter By The Day,” and “This is My Happy Place.”

During this particular video, Robin had a pair of black designer heels sitting next to the pillows, along with a stuff penguin plush.

Behind the GMA host are a bunch of pictures of her with family members and friends.

Many books, including the one she wrote, lie on the shelf, as well.

Knick knacks, a TV, a fan, a light-up LED “R,” and an Oscar award are all placed neatly on the shelf.

When the camera panned to her GlamFam, more pictures could be seen on the second shelf.

A statue of the word “Believe,” a bottle of champagne, a computer, and all of her make-up products also adorned the shelf.

In between the two shelves is a huge mirror that is surrounded by lights.

Under the mirror was a journal, a sink, and more pictures.

Robin also showed off her office last week when she returned from her absence on the show.

Robin sat behind the desk on Thursday morning with George Stephanopoulos and TJ Holmes after being out the entire week.

But many thought she was out due to working on a project for the show because she had gone social media silent.

However, she was suffering from an illness that she revealed in her recent Instagram video.

“Good morning. It is good to be back. And my voice is almost back,” she said.

“I have been battling Laryngitis since Sunday. I’d love to say it was because I was partying over the weekend, but it was just pickleball.”

“But glad to be here for the morning message and prayer,” she ended before going into the message.

Robin then went on to ask her GlamFam what they were most thankful for.

Fans were concerned for the host and took to the comments to wish her well.

GMA fans were quick to react to the news and many were besides themselves at her announcement.

“Grateful for another day of life. Things are so precarious in our world, we need to say thank you more often. Also thankful to have our RR et al back again Have a safe, happy & healthy weekend,” wrote one fan.

“Good morning Robin! Are you only working one day a week now? We miss you!” asked a concerned fan.

A third said: “Good morning Robin and GlamFam. I’m glad you’re back and hope you feel better. Have a great day!”

“Welcome back, feel better. Thank you. I needed this today. I need to let it go…” wrote another.

“Good morning, Robin! Happy to see you back on @GMA and hopefully you’re feeling better too!” commented one fan.

Many others simply said they were happy to have her back.

ABCThe other side was filled with pictures, a computer, champagne, and make-up brushes[/caption]

ABCShe had an Oscar award behind her, along with a fan, a small TV, and designer shoes[/caption]