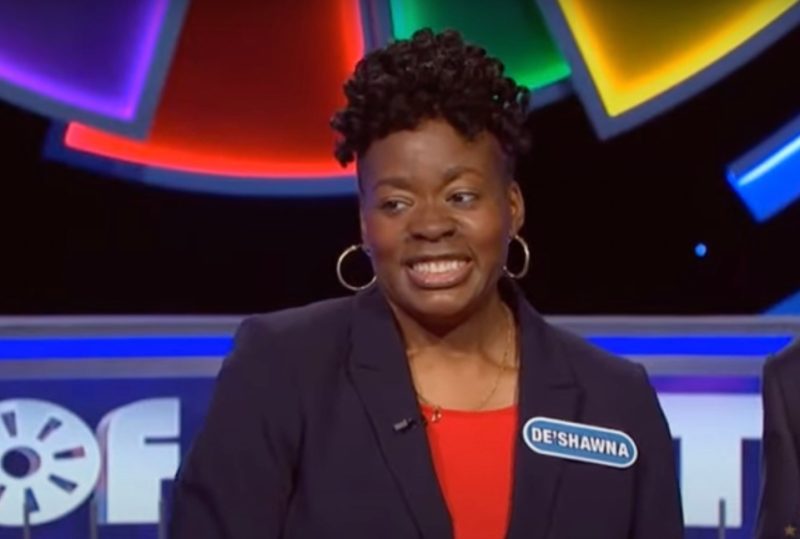 A WHEEL of Fortune contestant lost out on a massive prize when she was met with a puzzle under the category “Phrase” that fans deemed unreasonably difficult.

De’Shawna’s struggle caused host Pat Sajak and even Vanna White to wince as they felt terribly during Tuesday’s bonus round.

ABCShe was asked to solve this puzzle for ‘About To Doze Off’ with just 4 letters up: Pat asked Vanna: ‘That’s it?’[/caption]

The lovely Dayton, Ohio-based player told Pat, 75, during the interview portion that she wanted to be a rapper growing up “like Queen Latifah.”

Pat loved her story and fans loved watching De’Shawna do great at Wheel of Fortune nabbing lots of puzzles – until she progressed to the bonus round.

Selecting “Phrase” as well as “C, D, A, M and G” the three-word puzzle had only 4 letters up total.

With little to go off of in the 15-letter solve for “About to Doze Off”, De’Shawna looked crushed.

Even Pat was astonished and said before the 10-second timer started: “Uhhh, that’s it?”

“Can you find another [letter]? She had the wild card? No?”

“Uh, that’s all you’re going to get” Pat lamented.

De’Shawna could not get it and the timer ran out.

Pat then comforted: “You needed to have another letter or two to have a shot at it- ooh!”

He had looked at the glittery bonus prize card and then quickly shut it – opening it again, he revealed she would have won $100K.

Pat cringed and showed her the card: “I know” he said.

The camera cut to Vanna who clutched her hands together and looked devastated.

“It’s okay,” D’Shawna mustered up a response and left with a still admirable $46K instead of $146K.

One viewer tweeted on the sad scene: “Heartbreaking loss for De’Shawna.”

Another advised: “De’Shawna, here is a 100 reasons to NEVER pick Phrase as your bonus round category.

‘ARE THESE EVEN PHRASES?’

Fans have fumed recently that even without more letters, the “phrase” option from the show is often unfairly difficult – if it’s even a common phrase at all.

Earlier this week, Deb from Vail, Arizona made it to the final round – and chose the dreaded option of the three available.

The three-word puzzle lit up with letters, revealing a board that read: “-E LOVE —- .”

But without a single hint in the final five-letter word, it would be near impossible to figure it out “We Love Pizza” – even Pat recognized that.

“Well, there are lots of options,” he chuckled. “Just say everything you can think of and maybe the right thing will spill out.”

Deb did just that, guessing “We love America,” “We love Wheel,” and even “We love Vanna [White].”

“All those things are true but wrong!” Pat cried out. “I’m sorry,” he said to the contestant. “The P might have done it for you, or maybe even the A.”

Fans in an online thread for Wheel of Fortune, however, cried foul.

“That puzzle was honestly plain stupid!” one person exclaimed.

Another surmised: “When they want them to lose they’ll give them a puzzle with a lot of Z’s and Q’s.”

While one person simply wondered: “Has anyone actually said ‘WE LOVE PIZZA’ in their lives?”

“The category was ‘phrase,’ sorry but Wheel of Fortune has such bad writing” tweeted one more sharing the image of that bonus puzzle.

ABCLast week, fans accused the game show of ‘wanting Deb to lose’ by giving her the phrase ‘We Love Pizza’ which has 2 Z’s and is arguably not a phrase[/caption]