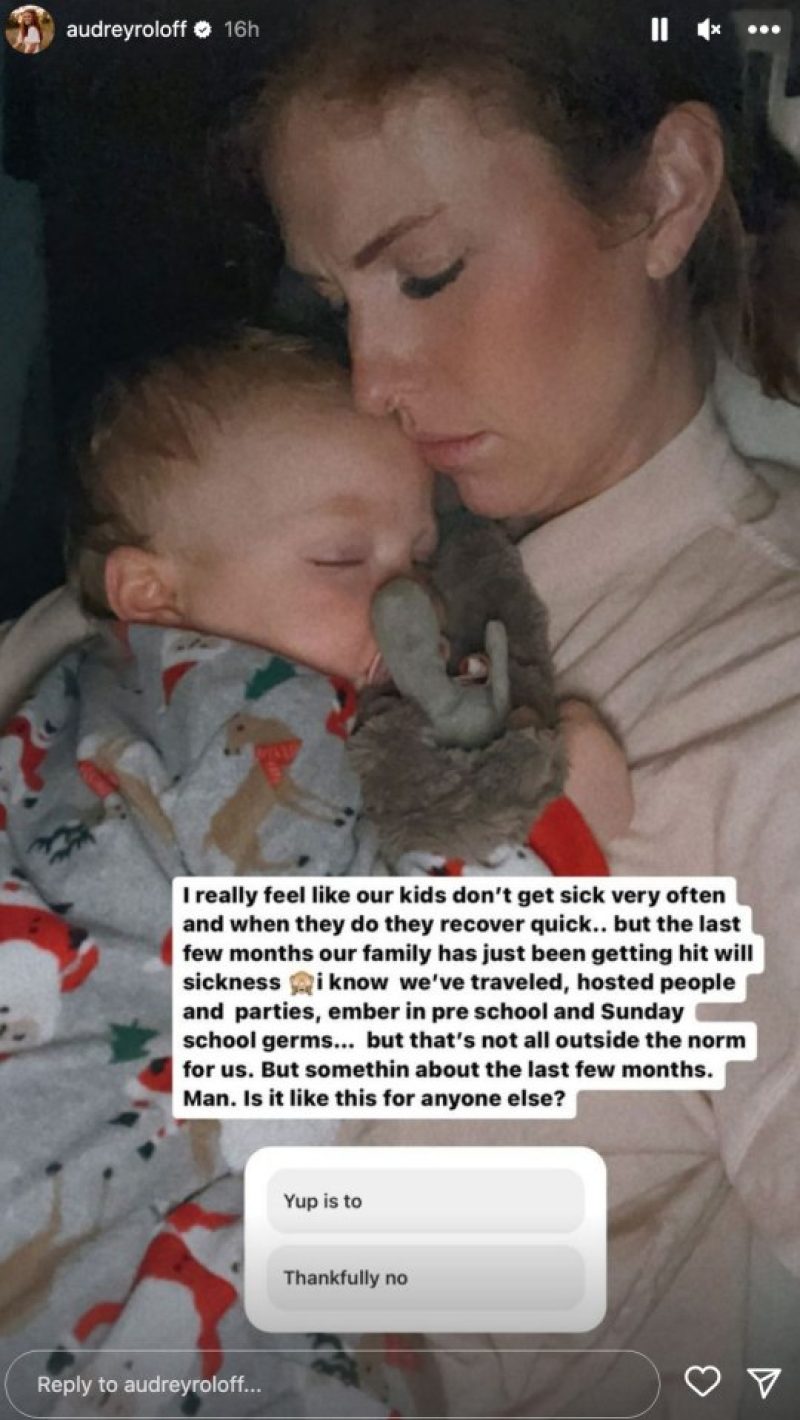 LITTLE People fans have criticized Audrey Roloff after she posted photos of her son Radley sick.

Fans have previously both Audrey, 31, and her husband Jeremy Roloff, 32, for their parenting decisions in the past.

The Little People, Big World alum posted a photo of herself holding her one-year-son Radley on her Instagram Stories.

She captioned the photo, “I really feel like our kids don’t get sick very often and when they do, they recover quick.”

The mother of three continued: “[But] the last few months our family has been getting hit [with] sickness.”

Audrey’s photo shows Radley lying on his mom’s chest while both mother and son appear to be asleep.

A screengrab of the InstaStory snap was reposted on a popular Reddit board dedicated to the long-running TLC reality series.

The post was titled, “Nothing like taking a picture of your sick kid and pretending you are sleeping!”

Little People fans rushed to the comment thread to share their take on what looked to be a staged photo.

One person wrote: “This post is cringy with the fake sleeping.”

Others added, “She’s embarrassing at this point,’ and “That’s so f**king weird.”

“Audrey has been bragging for YEARS that ‘my kids don’t get sick’ implying and bragging that her luck was because of her magic oils,” chimed another.

Referencing Audrey’s fake sleeping, one Redditor commented: “That’s what kills me. You can see her arm is stretched out to take the picture. The world is turning into one big show.”

While a second person agreed, writing “Yup. I don’t know why these pictures are so popular. I see multiple people posting them on social media. WE KNOW YOU’RE NOT ASLEEP.”

Earlier this week, Audrey was accused of putting her one-year-old in a “wildly unsafe” situation when she took to her Instagram Sunday evening and shared a video of her holding her youngest child, who was wearing a necklace.

In the short clip, the reality TV star held her son close and kissed his head whilst the sun could be seen setting behind them.

Little Radley, who celebrated his first birthday last week, looked adorable in a checked jumper and had his pacifier in his mouth as his mom spun the camera around to let her 1.6 million followers see the beautiful landscape behind them.

One fan decided to share a screenshot of the video on Reddit and wrote alongside it: “How tight is that necklace on a baby? Besides those being wildly unsafe, being this tight isn’t going to be effective either.”

Audrey has previously confirmed that the accessory is a Baltic Amber teething necklace.

Other Reddit users quickly commented on the thread as one person said: “Those necklaces look so dangerous.”

Another questioned: “How is it for teething if it [is] so tight around his neck?” while a third said: “That’s so horrible.”

Someone else asked: “Of course they’re dangerous but how would the tightness affect the effectiveness?”

A different person replied: “Until this thread, I (naively) thought that “Amber teething necklaces” were meant to be teethed on. I didn’t know it’s (theoretically) supposed to just work by magic.”

Another Reddit user explained: “Ooh chewing on them would be terrifying! When heated up, amber releases some sort of pain relief compound, so there is science behind it, but unfortunately, amber needs to be heated up to like 400 degrees or something for it to be released so body heat doesn’t quite do the trick.”

A different person claimed: “I remembered watching another lady on TikTok whose son died from one of those amber teething necklaces. They are so dangerous!”

This isn’t the first time that the Little People, Big World star has been slammed for letting Radley wear the teething necklace.

Back in September, some people claimed that the accessory puts him at risk of strangulation and even death.

Audrey recently held a Q&A session with her followers where the question about her son’s toy came up.

One fan asked: “What is the necklace your youngest wears?”

The former TLC star shared an adorable snapshot of her newborn son smiling while wearing the teething necklace.

Audrey also uploaded a short clip of her 10-month-old toddler on his “snack break” as he wore the necklace.

Teething necklaces reportedly release succinic acid into the body to provide relief from the pain of teething.

But according to the American Academy of Pediatrics (AAP), teething necklaces and any other type of jewelry are considered unsafe and should not be worn by infants.

Instagram / Audrey RoloffAudrey was criticized by fans for putting a teething necklace, which has been deemed unsafe by the AAP, around her son’s neck[/caption]

Instagram/ Audrey RoloffAudrey with her husband Jeremy Roloff and their children Bode, Ember, and Radley[/caption]