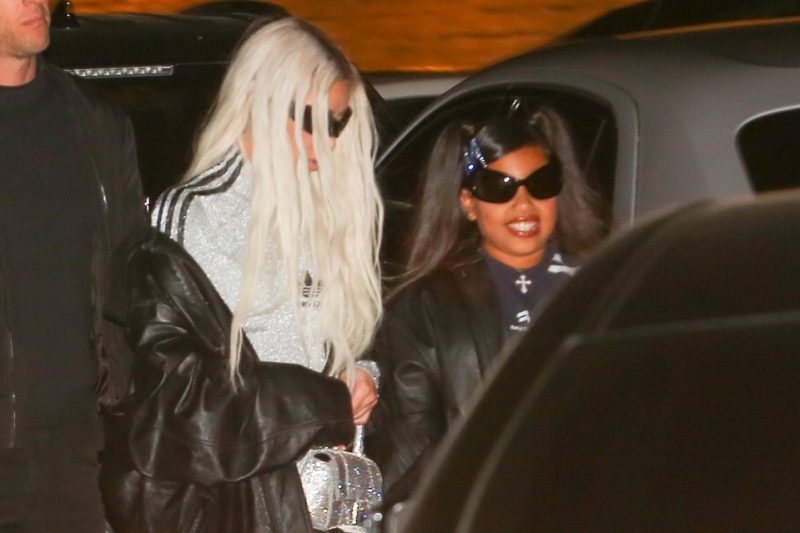 KIM Kardashian has looked skinnier than ever as her tiny frame nearly drowns inside her large leather coat.

Kim, 42, and her daughter were photographed as they entered the star-studded event.

As previously mentioned, the Keeping Up With the Kardashians alum wore a black leather jacket that hung from her shoulders and swallowed up her thin frame.

Kim and Kanye West‘s daughter showed off the pair’s outfits in a TikTok before the event.

Kim’s slender body nearly disappeared underneath the sweater as The Kardashians star continues to shock fans with her extreme weight loss.

The Skims founder looked extra skinny as the mother-daughter duo got dressed for Hailey’s birthday party.

After trying on different outfits, the pair settled on an all-black look for North and a form-fitting Adidas top for Kim.

“Going to Hailey’s birthday,” the little girl said loudly over the music as she tried on several different pairs of sunglasses.

Kim and her daughter sang the words to the song Ghost by Justin Bieber, 28, as they made their way to the garage.

The duo filmed their over-the-top sparkly bags and the orange seats of their luxury car as they went on their way.

Kim showed off her slim figure in a pair of baggy grey sweatpants while she wrestled, danced, and rolled around on the floor with her daughter North.

Posting to their joint TikTok account on Thursday, Kim showed fans that she was spending some quality time with her eldest daughter.

At the start of the video, Kim could be seen pulling up her grey drawstring sweatpants.

She wore them with a matching grey bandeau top, likely from her own brand Skims.

The sped-up clip first showed them pogoing up and down on the plush carpet at Kim’s $60m mansion.

They then dropped to the floor and rolled around laughing as they kicked their arms and legs in the air.

For another dance, they held onto each other’s arms and jigged around before Kim tackled North to the ground playfully.

The preteen got up and shadowboxed at the camera while Kim lay back and laughed.

Kardashian fans have expressed being divided over a recent TikTok video that Kim posted with her daughter.

The Kardashians star shared a video of herself and her eldest child lip-syncing to Ariana Grande’s song Santa Tell Me.

While Kim went bare-faced and wore simply black sweats in the video, fans couldn’t help but notice the heavy makeup North was wearing.

They took to a popular Kardashian Reddit thread to express their concern.

“We all know this family isn’t doing this innocently — they are pushing her out in the family business at 9 years old. It’s gross,” they continued.

Another wrote: “Personally I feel like 9 is too young for makeup. I mean if you think about it, she’s only in third grade.”

One argued: “I have to assume she’s not wearing makeup to school. I know I was playing with makeup from Claire’s when I was elementary school age lol.”

“I feel like 9 is such a normal age for wanting to wear makeup and dress up. I’m 31 but I remember they sold little makeup kits for kids back in the day,” said another fan.

One parent wrote: “I have a 9-year-old daughter and some of her peers are wearing makeup. Not flawlessly like Northy, but they’re super into it. I do agree with it being too young for online presence though.”

Kim also came under fire from fans for potentially causing a security breach with the video.

She seemed unaware that she had leaked North’s school’s name, which was spotted on her shirt.

Another pointed out that Kim’s ex Kanye West had already revealed the name of North’s school in an Instagram rant earlier this year.

The fan hit back: “[Kim] knew it was a stupid thing for [Kanye] to do, hence the extra security, yet she’ll keep posting it?

“So now you have two airheads instead of one.”

Back in September, Kanye named North’s school while demanding that she stop going there and attend his own school, Donda Academy, instead.

He wrote on Instagram at the time: “My kids going to Donda. They not going to [name of North’s school].

“I was driven crazy before. I’m not going crazy no more.

“It’s not up to Calabasas or Hulu where my kids go to school. I’m not the crazy one here.”

TikTok/@kimandnorthKim shared a video of herself and North dancing, wrestling, and rolling to Katy Perry’s Firework[/caption]

TikTok/@kimandnorthKardashian fans were divided after North, 9, showed off her beauty makeover in a new TikTok with Kim[/caption]