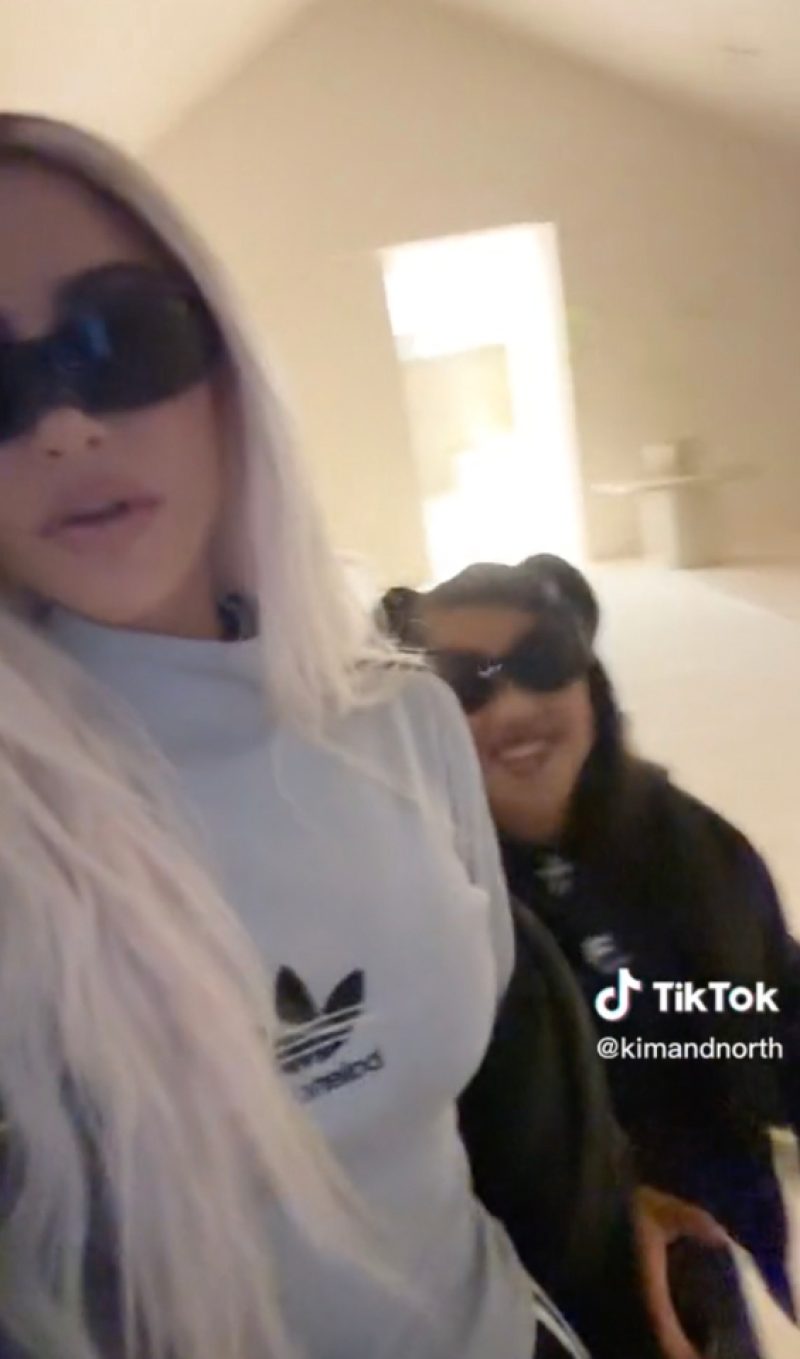 KIM Kardashian’s thin frame nearly disappeared in a small sweater while filming a new TikTok with her daughter North.

The Keeping Up With the Kardashians star has shocked fans with her extreme weight loss in recent posts.

Kim, 42, looked extra skinny in a new video on her TikTok profile that she shares with her daughter North, nine.

In the clip, the mother-daughter duo got dressed for a friend’s birthday party.

After trying on different outfits, the pair settled on an all-black look for North and a form-fitting Adidas sweater for Kim.

“Going to Hailey’s birthday,” the little girl said loudly over the music as she tried on several different pairs of sunglasses.

Kim and her daughter sang the words to the song Ghost by Justin Bieber as they made their way to the garage.

The duo filmed their over-the-top sparkly bags and the orange seats of their luxury car as they went on their way.

But the reality star looked super skinny in the post, nearly drowning in her small Adidas sweater.

Earlier this week, Kim sparked concern after revealing her tiny waist in jeans and a crop top in Miami.

The mother of four was photographed wearing the pair of baggy jeans that hugged her figure in some spots but hung loosely off her tiny waist.

The Hulu star paired the pants with a black cropped top, red sunglasses, and a little red bag.

Her blonde hair hung down over her shoulders with her dark roots showing slightly.

Fans have repeatedly expressed concern for the star, who has lost more than 20lbs since May 2021.

Photos from the outing were shared on Reddit, where critics wasted no time weighing in.

“Her hips are lower than normal in these pics!” one person observed.

Another wrote: “So happy to see jeans but… oof that wonky hip.”

“There’s no way sitting in the jeans is comfortable,” a third commenter wrote.

Fans have been buzzing about Kim’s hips as of late.

Posting on a Kardashian fan page, one user shared an image taken in 2021 next to a photo of Kim from earlier this month.

In the image on the left, Kim was dressed up as her mother, Kris Jenner, in tune with the theme of the momager’s 67th birthday at the beginning of November.

Kim’s waist looked very tiny in the green sequinned dress, especially when compared to the photo from 2021 which showed her modeling several SKIMS pieces.

Fans on Instagram quickly commented on the post as one person pointed out: “I know what to say PHOTOSHOP.”

A third person chimed in: “You look unhealthy in the 2022 pic. Just for a dress to fit… no Kim, please go back to your normal body weight- You were perfect.”

The original user later shared a video montage of clips of Kim at red carpet events prior to the 2022 Met Gala, and then more recent events after shedding the pounds.

PrevPreviousTeen Mom fans concerned for Leah Messer as they spot ‘disturbing’ detail in video with daughters Ali & Aleeah, 12
NextKylie Jenner busts out of skintight corset dress on the red carpet & fans think she looks like a ‘sexy Disney villain’Next