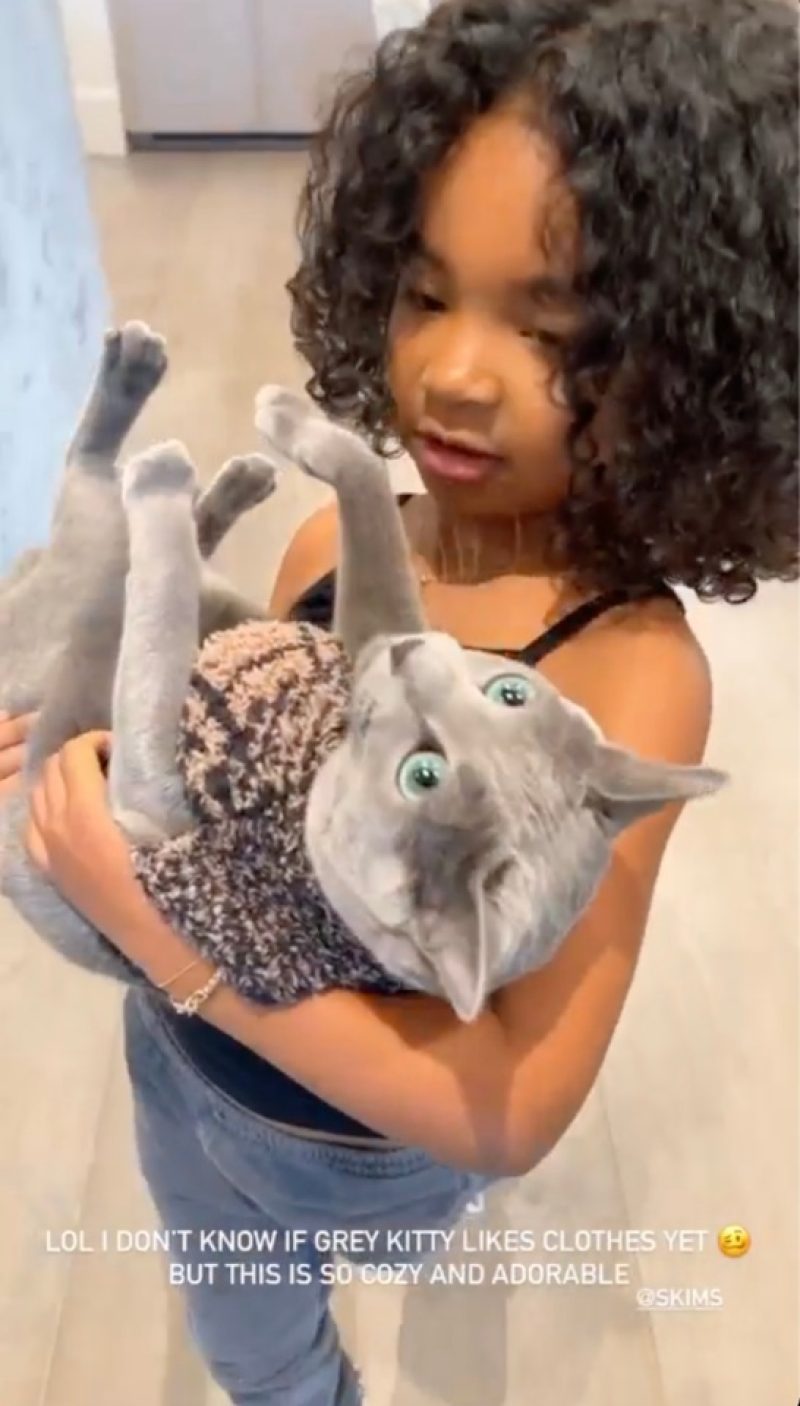 The reality star filmed her baby girl as she proudly carried her pet.

Instagram / Khloe KardashianThe pair have made their love for Grey Kitty known, even dressing at him for Halloween[/caption]

In the clip, True is seen sporting her hair in a cute curly style, wearing a black tank top and grey pants while holding her cat.

The cat – Grey Kitty – is sporting what looks to be almost like a sweater vest, apparently designed by Skims, Kim’s fashion range.

True walks around holding the cat, who doesn’t look entirely thrilled about the ensemble.

Khloe captioned the post: “Lol I don’t know if Grey Kitty likes clothes yet. But this is so cozy and adorable.”

The Kardashians star and her daughter have been proudly showing off their pet and their love for it online.

The Good American founder and her daughter dressed up as Grey Kitty for Halloween, sporting adorable matching outfits.

They posed for photos with the cat, too, which added to the adorableness.

While her sisters were showing off elaborate Halloween costumes, Khloe opted to keep it simple.

The star and True twinned, dressing up as their family pet.

Khloe shared a carousel of snaps on Instagram with the pair wearing outfits inspired by Grey Kitty.

Both the mom-of-two and her daughter donned bodysuits that appeared to be a velour material.

They also had matching grey cat-ear headbands and had whiskers and a little black nose painted on their faces and small clear crystals stuck around their eyes.

While the costumes weren’t the most complex, they did not ignore the details.

Khloe and True had pink necklaces around their necks to really make them look like Grey Kitty.

She captioned the post: “Ladies and gentlemen… Grey Kitty!

Khloe’s cat isn’t just a family pet; it made its modeling debut alongside the star in a recent photoshoot.

While promoting the latest range from her denim brand, the star ditched her pants altogether.

She posted a photo that showed her crouching low to the ground, showing off her long legs in a large white button-down shirt.

Khloe held Grey Kitty in her arms and accessorized with sparkly silver heels and a crystal necklace.

The cat had on a matching necklace.

Posting the image to her Instagram Stories, Khloe added the caption: “We’re going full glam on your favorite denim fits because there is no such thing as too much bling.”

Her new line features jeans with crystal detailing, sparkly tops, and flashy heels, in line with the upcoming party season.

PrevPreviousTeen Mom stars and fans crack up after Catelynn Lowell’s daughter Nova, 7, reveals where babies come from in new video
NextKardashian fans share wild theory on why Pete Davidson was ‘wiped’ from Hulu show as he ‘dates’ Emily RatajkowskiNext