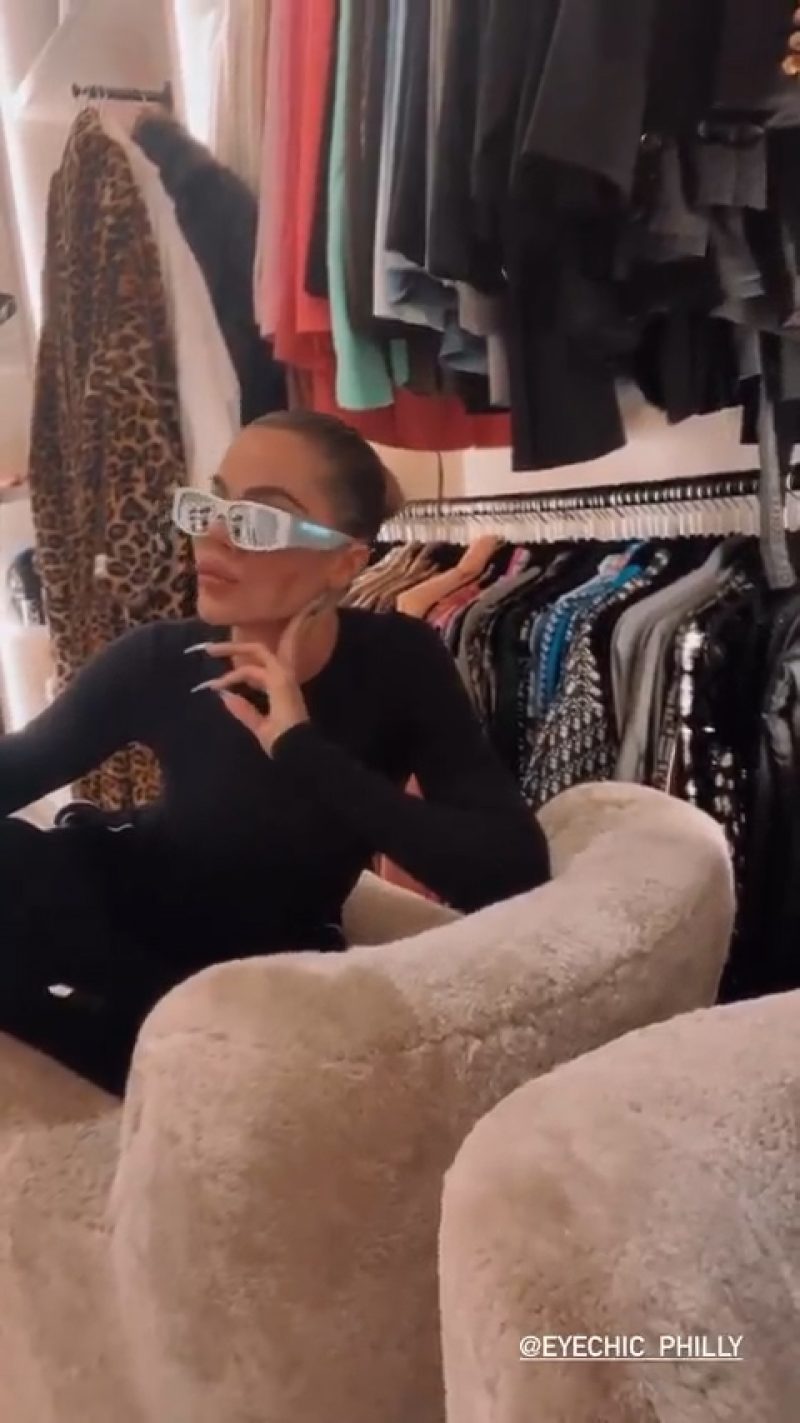 KHLOE Kardashian has revealed her sharp jawline and skinny arms in a new video taken inside her massive designer closet.

The Hulu star’s sharp, angular features are a result of the TV personality’s recent weight loss, a topic of concern among fans.

After uploading a video showcasing a pair of Balenciaga sunglasses backed by the Three 6 Mafia hit Stay Fly, the Keeping Up With the Kardashians alum shared a Boomerang of her modeling the shades.

Taken inside the LA native’s closet, the recording shows Khloe dressed in an all-black ensemble while sitting on a plush chair.

Designer items hang on the pair of clothing racks mounted to the wall behind her.

The Good American co-founder tilts her head side to side, showing off the Italian fashion house’s sunglasses while also flaunting her chiseled cheekbones and deeply defined jawline.

The Kardashians star recently looked skinnier than ever as she wore super tight jeans, accentuating her tiny frame while promoting a bedroom furniture giveaway on Instagram.

Her shrinking frame was on full display, along with various pieces of children’s furniture and toys.

Khloe wrote in the caption that a lucky winner will win everything, writing: “Literally, you get everything in this photo — delivered directly to your door!”

The new photo comes after her sister Kim, 42, proudly bragged that Khloe is “skinnier than ever” during a pre-Met Gala fitting.

During a recent episode of The Kardashians, Khloe was shown getting fitted by designer Jeremy Scott and his team for the Met Gala.

Kim was present at the fitting at her younger sister’s house.

The Skims mogul commented on her sibling’s weight loss, saying: “You’re skinnier than ever.”

Jeremy, 47, then chimed in: “Your measurements are smaller than the models that would do the show so you should know that that little waist is teensy itsy bitsy.”

Khloe didn’t respond to the weight comments and instead stood in the corset top of her gown sans pants, showing off her thin arms, shrinking waist, and stick-like legs.

Fans slammed Kim on both Reddit and Twitter, with one person writing: “Ugh not them falling over themselves praising how skinny Khloe is.”

Another fan pleaded with Khloe: “Girl stop starving yourself. That s**t is real-life scary.”

After shedding 60 pounds since the birth of her daughter True in 2018, Khloe appears to have lost even more weight following her baby daddy Tristan Thompson’s cheating scandal.

Back in August of this year, Tristan and Khloe welcomed their second baby via a surrogate mother.

Another episode of the Hulu original series saw Kim express the family’s concerns for the youngest of the three Kardashian sisters.

She continued: “I will say that Kendall and Kylie, not that I’m trying to out them, but they did text me and say that they were a little concerned for you because you’re really skinny. I said, ‘I think she’s a bit stressed, and I think that she…’”

But Khloe seemed shocked to hear this, interrupting with: “And Kendall said it? The model?”

“And I said, ‘You absolutely have every right to be concerned, but I’m telling you, she’s fine.’”

Despite the reassurances from Kim, Khloe’s fans have continued to express their worries as she shows off her slender physique with bikini and underwear photos on social media.