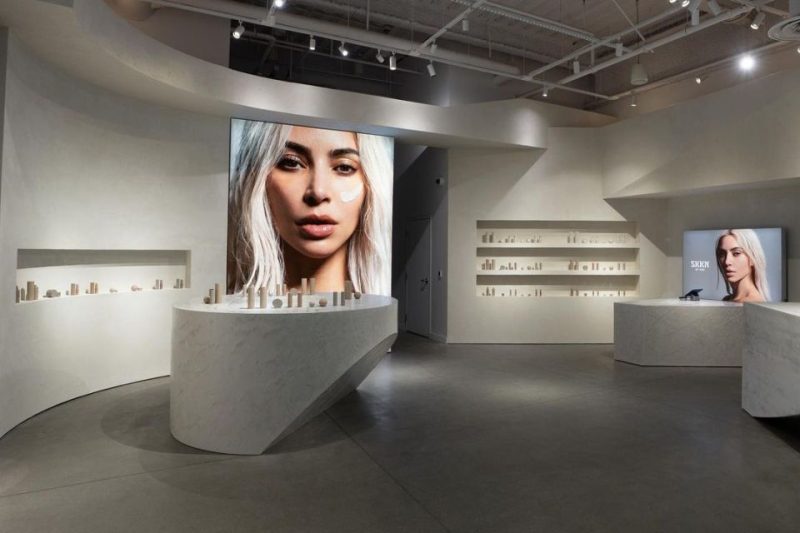 KARDASHIAN fans have mocked Kims’ new SKKN pop-up shop as “creepy” after she gave them a sneak peek look at it on social media.

Kim, 42, took to Instagram to share some snaps of the temporary store at Westfield Century City in Los Angeles.

The Kardashians star captioned the post: “The @SKKN BY KIM Holiday-Pop up opens TOMORROW at 10AM at Westfield Century City. Level 1, Atrium. Monday-Saturday, 10AM-9PM. Sunday, 11AM-8PM.”

The first image was a wide shot of the store which features three shelves with SKNN products placed strategically on them.

In the middle of the room there is a round marble-looking counter, which also has a minimalistic amount of items placed on top.

A huge photo of Kim has been hung in the store and is a close-up of her face with a smear of cream on her left cheek.

However, Kim’s fans were divided after looking at the snaps and seeing the aestheticof the pop-up shop.

“Looks like nothing is in the store,” one person claimed.

Another said sarcastically: “So festive and colourful,” and a third added: “The aesthetics look like Morse code or braille.”

Over on the SKKN Instagram page, followers weren’t any more complimentary as one said: “The decor is so dystopic and depressing.”

Another person wrote: “Looks colder than a dr.s office or a cell lol.”

A third person asked: “Why why why? Are these pieces for depressed people.. ?” while a fourth added: “Looks like prison.”

However, others absolutely loved the look of Kim’s pop-up store and said the mom-of-four was “crushing it”.

“So aesthetically pleasing. I could live here,” one person wrote.

A third person observed: “OMGGG SO COOL AND SOFT.”

Mom-of-four Kim launched her skincare brand back in June.

“I’m excited to finally introduce to you SKKN BY KIM, a rejuvenating nine-product skincare ritual that I have developed from start to finish,” the reality star tweeted at the time.

“I’ve been so privileged to learn about skin and skin care over the years from the world’s top dermatologists and estheticians, and every bottle from my new line is filled with the knowledge I’ve accumulated along the way.”

All products come in sleek refillable packaging in her go-to neutral hues, and are formulated with “clean, science-backed ingredients designed to nourish all skin types, tones, and textures at all stages of maturity”, she explained in the summer.

Of course, Kim was already well versed in beauty industry thanks to her KKW Beauty and KKW Fragrance brands – which underwent a rebrand due to her divorce from Kanye West.

While Kim axed the “West” from the brands, she previously said she wasn’t simply changing her brand name to spite her ex.

“And I felt so bad. And then Skims, you know what I mean? So I wanted one beauty brand.”