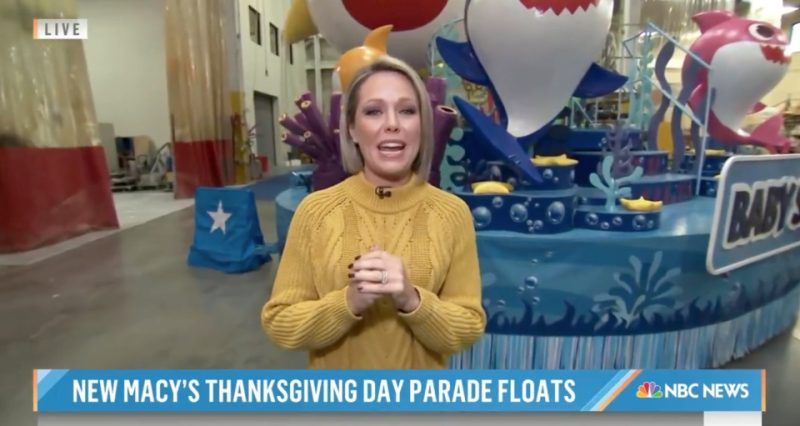 TODAY host Dylan Dreyer was absent from the program on Tuesday because she was off on a cool assignment ahead of the Thanksgiving holiday, she revealed.

Her colleagues holding the show down while she was in New Jersey video-called her live on both Today and the Third Hour.

Dreyer was in New Jersey getting the inside scoop on some of the Macy’s Thanksgiving Parade floats ahead of next week.

“What’s really amazing is that they are all built here in New Jersey,” she explained.

The star added that the floats all folded up to fit through the Lincoln Tunnel and transported to New York City on the day of the parade.

Getting the first look at new floats added to the almost 100-year-old parade for 2022, Dreyer showed Today viewers the Baby Shark float and balloon unit.

More on the Today show

The new Baby Shark float is the first of its kind.

She also showed the details of a Toys R Us float decorated with toys.

Dreyer is looking forward to the Thanksgiving holiday this year with her three young sons and husband Brian Fichera.

The 10-year married couple’s sons are named Calvin, Oliver and Rusty, and the family lives in a beautiful New York City apartment.

She has a lot to be thankful for this year with her youngest son recently turning one and the release of her second book, Friends Through Rain Or Shine.

Her newest book follows the success of her debut children’s story in its series.

Dreyer’s youngest son, Calvin, was a huge driving force in the writing process, she shared with Hello Magazine.

“Calvin has been ‘co-editor’ throughout this whole process because every time we read the book I would always read it to him and he saw it when it was just on my computer on a word document,” she said.

“It’s fun for everybody to get the copy and read it and just so cool to imagine people reading it to their kids,” she added.

“You’re putting yourself out there and it’s just nice that everyone has liked it so far.”