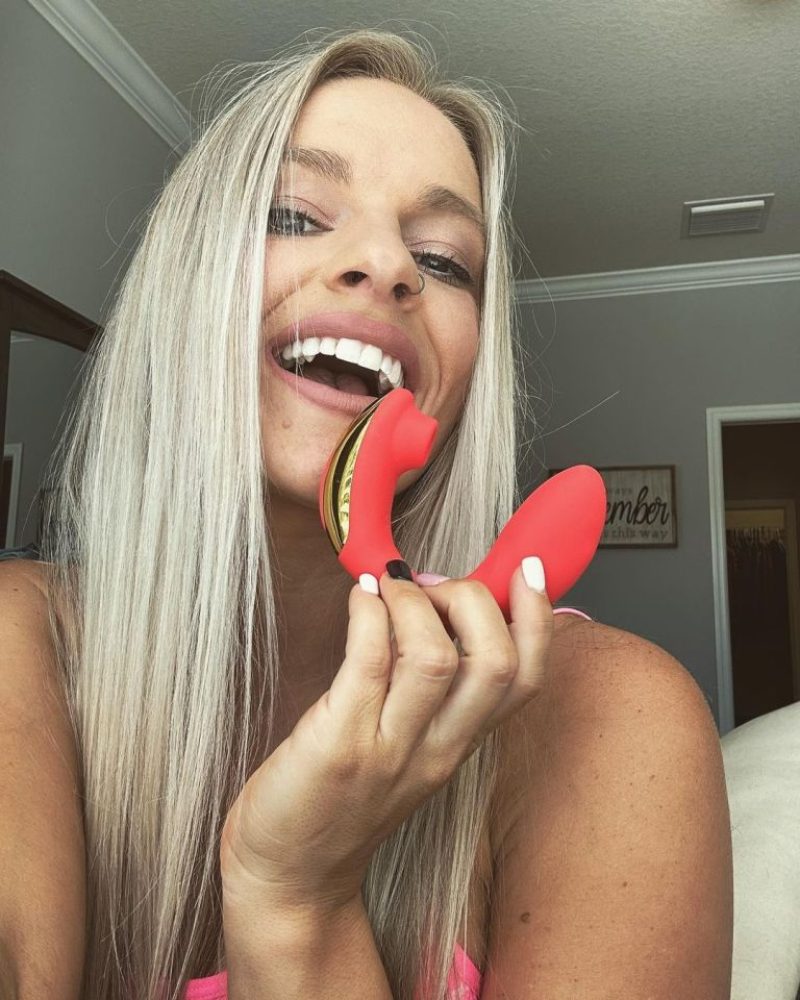 TEEN Mom fans have begged Mackenzie McKee to keep NSFW objects away from her face as she promoted them online.

The star has been sharing increasingly sexy posts on Instagram in the wake of her split from Josh McKee.

The star posed with two products for separate photos, holding both up for fans to see.

In one photo, the product was especially close to the former Teen Mom star’s face, leaving some viewers grossed out.

Her pics were shared to Reddit, where critics pled with her to make some space between her face and the adult toys.

“Girl get that away from your mouth wtf,” one critic commented.

Another wrote: “I thought that was a big a** retainer from the thumbnail.”

“What is this? Does she think it goes in her mouth?” someone else questioned.

A fourth commenter wrote: “The way she is holding it & the pose made me think it was a mouth guard at first glance.”

“Who’s gonna tell her that it doesn’t go in your mouth?” another critic commented.

Meanwhile, Mackenzie has been focusing on herself and her family.

Recently, she threw shade at her ex-husband Josh, who went public with his new relationship.

After he shared a photo of himself having a wild night out with his girlfriend, she hit back with a family-focused post.

In the adorable photos, Gannon, 11, Jaxie, eight, and six-year-old Broncs are cuddled up to their mom as she pouted for the camera.

She captioned the post: “My world my focus everything I do is for you three…. #mom.”

Her followers praised her as they commented on the photos.

One person wrote: “You’re successful and an awesome mom, you should be proud of yourself and how far you’ve come all on your own.”

Another said: “Everyone looks happy and that’s all that matters. What’s meant to be will be.”

A third fan commented: “Not knocking Josh at all— but y’all look so happy now! Just content with the life you’ve created.”

And a fourth added: “Ohhhhhh the shade. So glad your children have you.”

Someone else wrote: “you are truly such a strong person in my book,” and a different person said: “Way to go posting a pic of the fam and keeping your priorities straight while you-know-who posts pics being straddled in a bar. Keep it up momma!”

Another person noted: “Every parent should always put the kids as priority.”

Mackenzie confirmed she had split from her husband Josh back in July and confessed that she fought hard to make their relationship work.

Posting two images of her with Josh on Instagram, she wrote: “With all the messages I’m receiving and articles coming out, I wanted you guys to hear what’s going on from me alone.

“Sometimes things work and sometimes, no matter how hard you fight, it just doesn’t work out.

“I am breaking my silence about Josh and I being done.”

The Teen Mom 2 and Teen Mom OG alum continued on the split, “I will always respect him as the father of my children but it’s time for me to find my happy.”

She then asked her followers to go to her bio for “my full statement.” with a broken heart emoji.

“Josh and I are both still young with an entire life ahead of us,” the former cheerleader added to the outlet on their 12 years together and nine of marriage.

“And I wish nothing but peace and happiness for him and his future. Everyone has their own story, and this is mine.”

She told them she’s “stepping into an entire new life and new me” and did not elaborate on the reasoning but said she walked away.

“Us women do not leave until we are ready, until we can wake up, notice the coffee don’t smell right and something is off. That was my marriage,” she shared.

“But my marriage is all I’ve ever known since I was a young teenager.

“I wasn’t sad, I wasn’t sad about anything, I wasn’t angry, I wasn’t depressed. I gained my power back as a female who finally knows her self-worth.

“And I was finally so exhausted that I was done, and anything that has hurt me these past five years was gone. I no longer care.”

Josh confirmed that he was in a relationship with a new woman and then shared a cheeky snap of him and his new love interest.

On Saturday, the father-of-three posted a pic of his girlfriend, Haile, straddling him while they were out at a bar.

Josh wrapped his arms around the blonde beauty, who was wearing tight jeans and a black leather jacket.

The MTV alum pressed his lips to her breasts, hiding behind her jacket and his baseball cap.

He captioned the post by tagging his girlfriend’s social media handle.

Earlier that week, fans were introduced to Josh’s new girlfriend after she shared a photo of the pair on her own Instagram page.

The snap showed the duo cuddled close as they enjoyed a night out.

Mackenzie is thought to have moved on as well, though she has largely kept her suitors out of the spotlight.