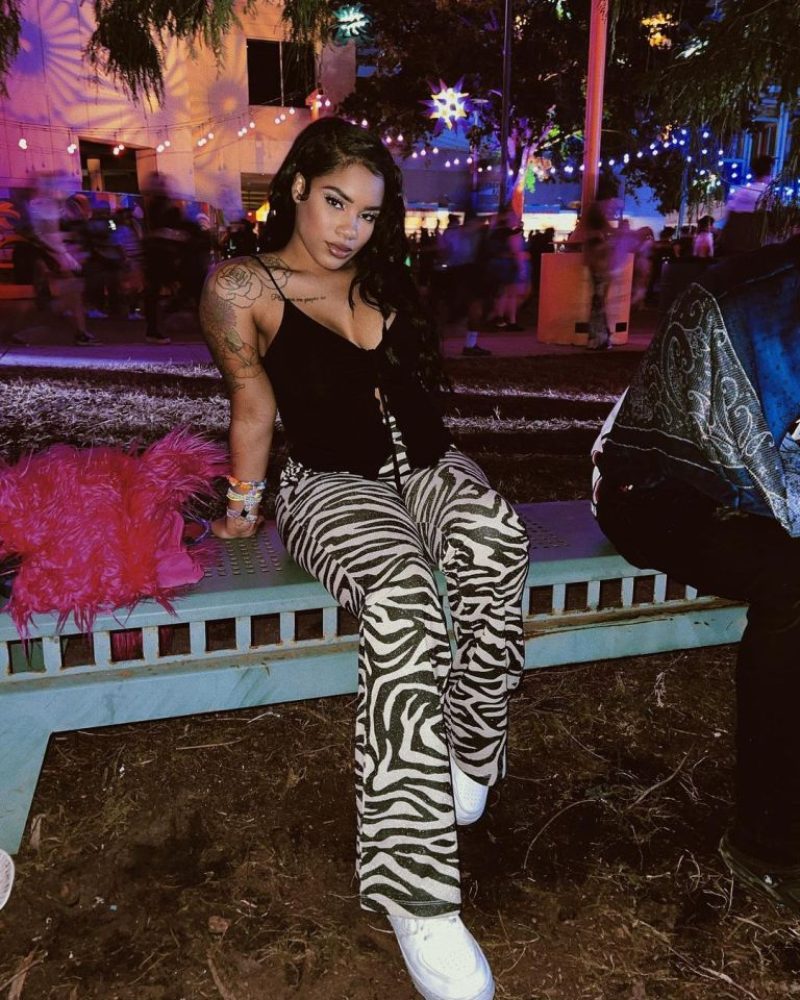 TEEN Mom star Ashley Jones has been making the most of her boob job yet again in another daring outfit.

Ashley, 25, took to Instagram on Monday evening to share some snaps from her weekend at the Electric Daisy Carnival.

In the first image, the mom-of-one posed on a bench wearing black and white animal print flares with a skimpy black crop top.

The teeny tiny garment featured spaghetti strap sleeves and jhust about protected Ashley’s modesty as she pulled a sultry pose for the camera.

In the second shot, she’d added a bright pink fluffy coat to her look and pouted as she leaned forward.

The third image was a sweet selfie of Ashley with her husband Bar Smith, who was dressed in a black and purple tie-dye sweater and a bucket hat.

Ashely also shared a picture of herself wearing a completely different outfit.

This time she showed off her legs in a pair of sexy fishnet tights which she teamed with a bright pink patterned co-ord of shorts and a long-sleeved shirt.

The Teen Mom alum completed her look with a pair of black biker boots, colourful clips in her hair and glitter eye makeup.

She also shared a video from the event and captioned the post: “& all I can say is I’ll see you next year at EDC VEGAS.

“To all the beautiful people I danced with under the lights, I WILL LEGIT NEVER FORGET YOU btw fam , we didn’t let sh*t stop us, THE RAVE GODS WERE ON OUR SIDE !! #plur.”

However, Ashley decided to turn comments off so her 599,000 Instagram followers were not able to inundate her with compliments.

But she did reveal that she lost her voice over the weekend when she shared a video on her Instagram story and said people have told her she sounds like Bad Girls Club star Natalie Nunn.

Ashley is no stranger to proudly showing off her body after she revealed she had undergone a breast augmentation in August 2020.

Most recently she shared her festive prep with fans as she decided to get into the Christmas spirit early.

The 11-minute video began with her chatting to the camera as she sat in her car before going into a store to buy some essentials for her DIY decorations.

As she addressed her fans, Ashley said: “It is officially November which means it is my favourite time of year: the holiday season.

“Technically, for me, that starts in October, but you know we’re getting into the Christmas spirit now.

“I do want to go a little extra for Christmas this year because typically we always move in like November, early December so I never really have a chance to like go all out for the holidays like I really, really want to,” Ashley continued.

“This year we are not moving so I’m gonna go ahead and decorate the way that I’ve always wanted to. This year’s theme I’ve picked out to be gingerbread, like a gingerbread house, like what you would see walking in a candy forest.

“I dunno, I’m using my imagination here, parts of my imagination that I haven’t used since I was Holly’s age but yeah, it’s time to get started,” she explained.

Ashley then went into the store and purchased some items and explained to her followers exactly what she was buying and why.

Later on in the video, Ashley was joined by her five-year-old daughter Holly as she got creative in the garage as her husband Bar filmed them.

InstagramAshley posing for a selfie with her adorable daughter Holly[/caption]