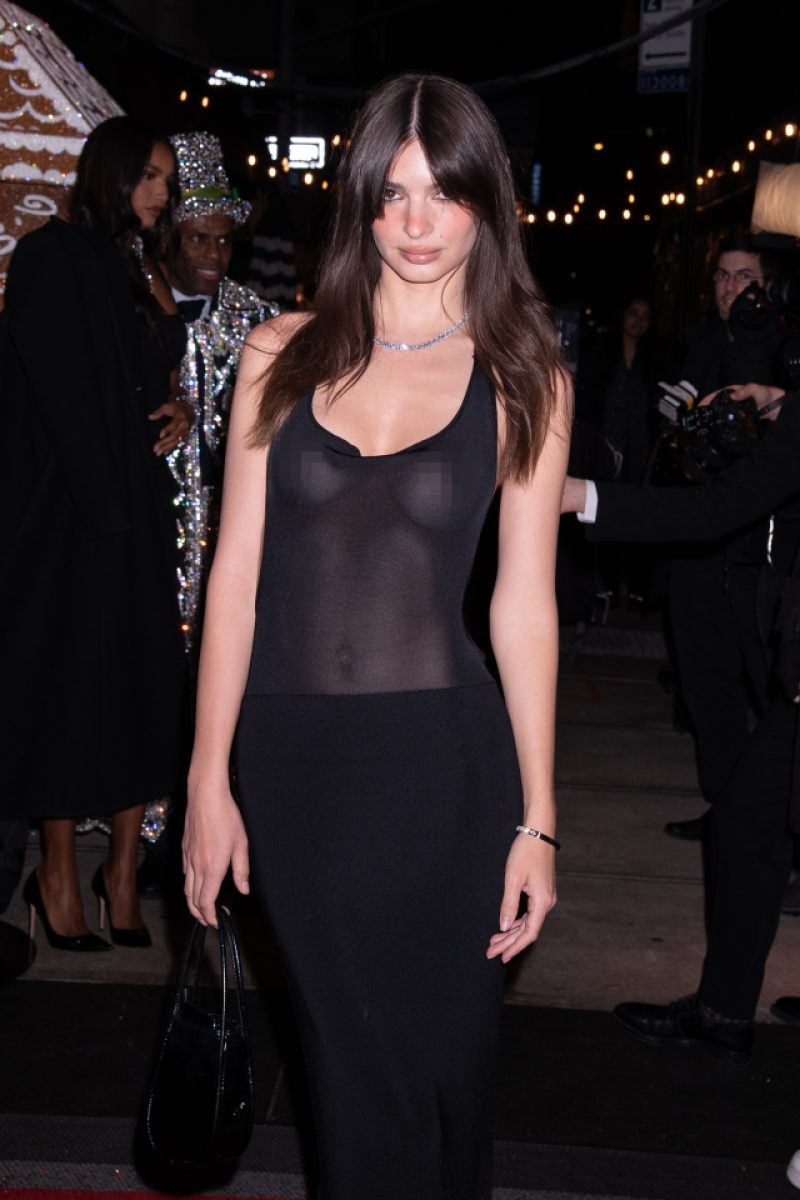 EMILY Ratajkowski has exposed her breasts in a NSFW sheer dress, amid rumors she is dating comedian Pete Davidson.

The model, 31, wore a black see-through evening gown at Swarovski’s celebration of the unveiling of the gingerbread facade at the Mark Hotel in New York City.

SplashShe appeared solo, despite rumors of a new romance with Pete Davidson[/caption]

The top of Emily’s dress was completely sheer, leaving little to the imagination.

Her bare breasts clearly visible through the very thin fabric.

Although her bottom half was covered by a solid black skirt, her entire back was exposed.

Emily parted her hair down the middle, with her long bangs loosely covering her eyes.

She appeared solo on the red carpet, despite rumors of a romance with Pete Davidson, 28.

A source told Us Weekly that the pair are even closer than once thought.

“Pete and Emily have been talking for a couple months now,” the insider claimed.

The two, who have both been back on the dating market for just a matter of months, are “in the very early stages, but both really like each other,” according to the outlet.

Pete has been keeping a low profile since his August split from Kim Kardashian, who is also friends with Emily.

He and the reality star dated for 10 months before they called it quits.

The King of Staten Island, who previously dated Ariana Grande and Kate Beckinsale among others, has not been linked with many new women until now.

However, he created headlines last month after suffering a “meltdown” on the set of his new sitcom Bupkis.

The fresh romance for Emily comes just two months after she filed for divorce from her husband of four years Sebastian Bear-McClard.

The pair, who share a 20-month-old son Sylvester, split in July amid rumors that the producer had been unfaithful.

‘HANDS ALL OVER HER’

Rumors began circulating after the comic and model pair were reportedly spotted on a date in Brooklyn, New York.

Fans became curious again on Sunday when Emily posted a photo of a cozy dinner date at her home which included a huge bowl of pasta with two spoons.

In an online thread, fans felt that the stars are a good match.

“They would look good together,” one person commented.

Another added: “I think she is much more of a catch than he is. But he seems to have a type.”

“They are a slay couple,” one excited follower chimed in.

One fan wrote: “This makes sense to me. It may or may not be true, but I could see it happening.”

“Remember that interview where she was saying really nice things about him? Saying she understands why girls love him,” another user said referring to Emily’s appearance on Late Night With Seth Meyers in 2021.

“He’s a professional,” Emily told the host during the interview. “First of all, you should know that about Pete.”

She continued: “Pete- he’s got the height. Obviously women find him very attractive.”

“… Guys are like, ‘Wow. What’s that guy got? And I’m like, I mean, he seems super charming. He’s vulnerable. He’s lovely. His fingernail polish is awesome.”

PrevPreviousPete Davidson’s fans go wild after singer, 81, says she will date comic, 28, after his ‘romance’ with Emily Ratajkowski
NextToday’s Jenna Bush Hager nearly breaks down in tears as she shares emotional story about her daughter Mila, 9Next