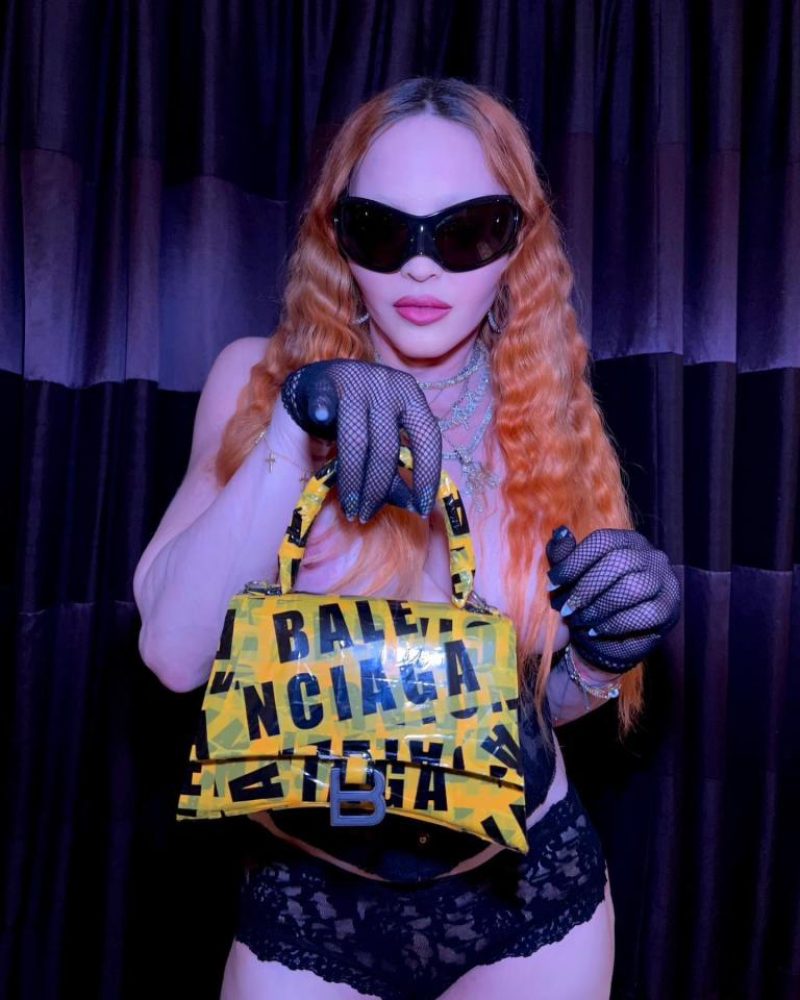 MADONNA fans have expressed being divided after the icon goes totally topless and flaunts her butt in lace underwear in new photos.

The pop singer has been accused of staging bizarre stunts to garner the public’s attention and stay in the spotlight.

instagram/madonnaMadonna fans have expressed being divided after the icon goes totally topless and flaunts her butt in lace underwear in new photos.[/caption]

Captioned, “[Cat emoji] in the Bag,” the photos show a sunglasses-wearing Madonna showcasing a Balenciaga bag in her bathroom while topless.

The post’s comment section quickly filled with remarks, both supporting and opposing the music legend’s most recent social media appearance.

One person wrote, “No. Absolutely not,” with another asking, “What happened to you, Madonna?”

“You need to stop,” commented a third fan before adding, “Stop trying to be something you are not. No need to try you’re already an icon. Now you just look like you’re trying to be 20 years old.”

A fourth commenter remarked: “You [are] already granny. Trying so hard to look for younger but life goes on.”

While another person stated: “She’s become a caricature of herself. You can’t take her serious anymore, so sad.”

One supporter commented: “It’s heartbreaking seeing all the hate in the comments.”

A second fan agreed, writing “People despise a woman who refuses to grow old gracefully. Madonna has never done what others wanted and I love that she won’t be a respectable ‘granny’ for them now.”

“Go ahead you little judgemental jealous losers!” chimed another.

They continued, “Artists are not here to act according to your expectations. Would you mock David Bowie for aging?”

The first of two snaps showed the Material Girl artist leaning toward the camera inside what looks to be her bathroom.

Text that reads, “Went from Candy to Money,” was conspicuously aligned to cover the star’s bare breasts.

The second photo depicts Madonna, now standing upright, with two lollipop emojis placed over the top of her nipples.

The Queen of Pop holds her arms up to her head as she wears nothing but fishnet stockings and metallic gold girdle underwear.

Madonna began the reveal with a post displaying white text over a black background.

It read, “I have a confession to make,” punctuated with a praying hands emoji.

Then, using a series of photos, the Like A Virgin singer went on to state “I was not circumsized [sic].”

Confused fans responded to the post with one person writing, “What the f**k does that even mean?”

Another fan commented: “This is what desperation, to stay young and relevant looks like, kids.”

Recently, the 64-year-old music legend made a bizarre ten-second video on TikTok in which she appears to come out as gay.

Captioned “If I miss, I’m gay”, the clip shows Madonna throwing a pair of pink underwear at a bin — and missing.

The video had been viewed more than 16.7 million times within 17 hours of being posted and has racked up almost 15,000 comments from puzzled followers.

The attention-seeking trick feels like rock bottom for Madonna, who is single-handedly ruining her legacy as pop’s most influential icon.

In spite of her admission, Madonna has a long list of famous male exes, including Michael Jackson and rapper Tupac Shakur.

In 1992, a couple of years after stating “everybody has a bisexual nature,” she fell out with Sandra Bernhard after she allegedly had a fling with her actress pal’s girlfriend Ingrid Casares.

Famously, Madonna kissed Britney Spears and Christina Aguilera as part of her performance at the MTV VMAs in 2003.