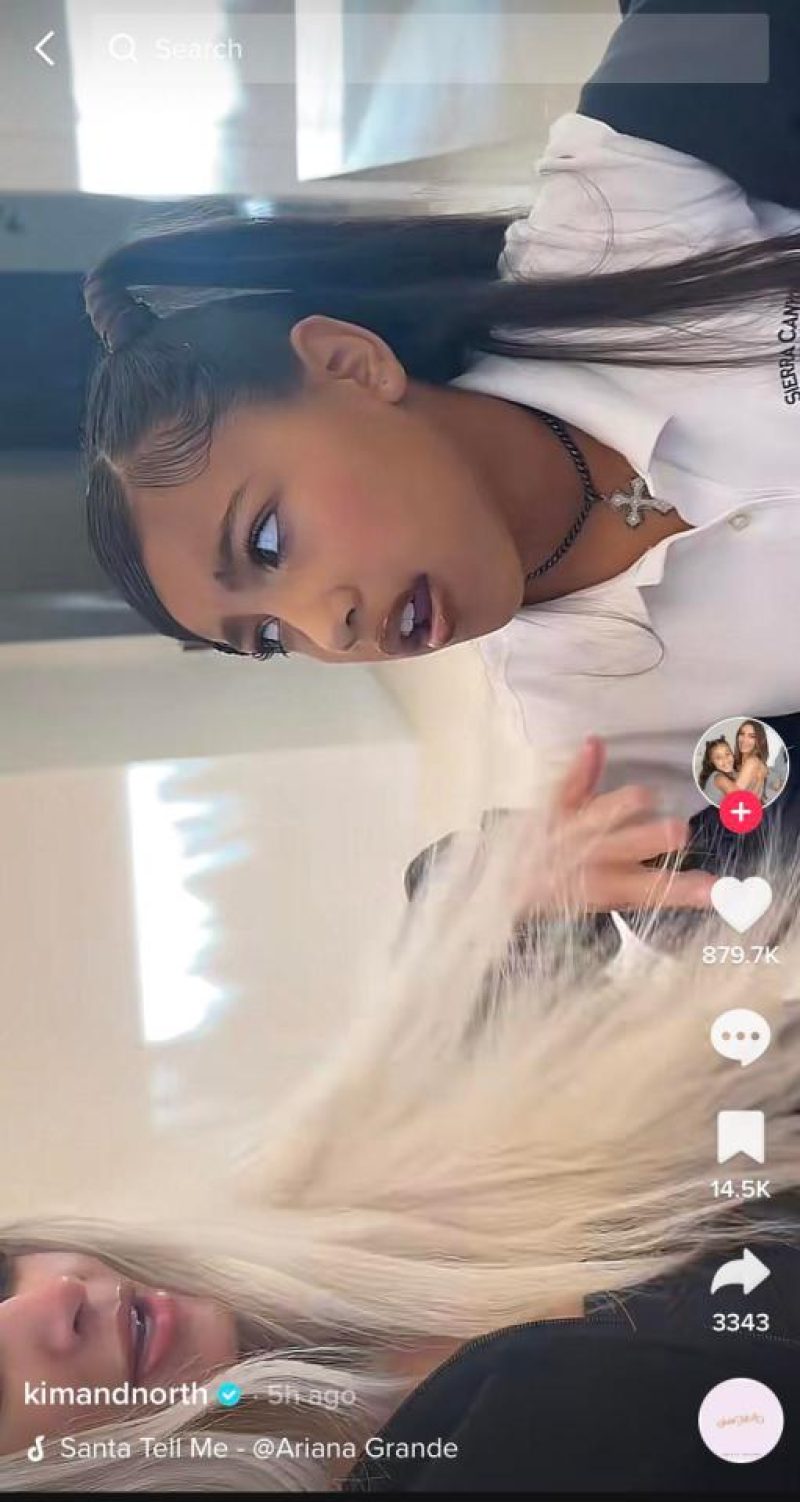 KARDASHIAN fans have become divided over the latest TikTok video Kim has posted with her daughter North.

The Kardashians star, 42, shared a video of herself and her eldest child, nine, lip-syncing to Ariana Grande’s song Santa Tell Me.

It was posted on Kim and North’s joint TikTok account on Monday.

But fans couldn’t help but notice the heavy makeup North was wearing.

They took to a popular Kardashian Reddit thread to express their concern.

“We all know this family isn’t doing this innocently — they are pushing her out in the family business at 9 years-old. It’s gross,” they continued.

Another wrote: “Personally I feel like 9 is too young for make up. I mean if you think about it, she’s only in third grade.”

One argued: “I have to assume she’s not wearing makeup to school. I know I was playing with makeup from Claire’s when I was elementary school age lol.”

“I feel like 9 is such a normal age for wanting to wear makeup and dress up. I’m 31 but I remember they sold little makeup kits for kids back in the day,” said another fan.

One parent wrote: “I have a 9-year-old daughter and some of her peers are wearing makeup. Not flawlessly like Northy, but they’re super into it. I do agree with it being too young for online presence though.”

Kim also came under fire by fans for potentially causing a security breach with the video.

She seemed unaware that she had leaked North’s school’s name, that was spotted on her shirt.

Another pointed out that Kim’s ex Kanye West had already revealed the name of North’s school in an Instagram rant earlier this year.

The fan hit back: “[Kim] knew it was a stupid thing for [Kanye] to do, hence the extra security, yet she’ll keep posting it?

“So now you have two airheads instead of one.”

Back in September, Kanye named North’s school while demanding that she stop going there and attend his own school, Donda Academy, instead.

He wrote on Instagram at the time: “My kids going to Donda. They not going to [name of North’s school].

“I was driven crazy before. I’m not going crazy no more.

“It’s not up to Calabasas or Hulu where my kids go to school. I’m not the crazy one here.”

The nine-year-old has been on a kick posting several hilarious TikTok videos, many with her famous mom.

North destroyed her mom in a viral TikTok where she ruthlessly parodied some of Kim’s greatest TV moments.

Her daughter recreated Kim‘s infamous yellow Balenciaga tape outfit and lip-synced to some of the star’s biggest meltdowns.

She paid homage to Kim’s Balenciaga look by wrapping yellow caution tape around her chest while wearing an oversized black T-shirt and pink shorts.

In another joint TikTok video, as Kim was driving, an audio clip was played from back in 2015, when the KUWTK star appeared on The Wendy Williams show.

In the video, Kim played the role of Wendy, and asked: “You don’t have tattoos anywhere?”

North, playing the role of her mom in this scenario, smiled and rejected the notion of getting tattoos on her skin.

She replied: “No! Honey, would you put a bumper sticker on a Bentley?”

The pre-teen then scrunched her face and eyebrows and gave the camera a befuddled look.

Kim’s physical skills aren’t North’s only target. She once mocked her own mother’s voice.

As Kim recently recorded a video for fans, her daughter accused her of changing her vocal range.

Kim replied curiously: “Talk different from what? For my videos I’m the same human being. How do I talk different?”

Taking the cue, North then delivered a sarcastic impersonation of her mother, using a high pitched, whiney voice.

“Guys! So today I got this new mask, and this new bronzer,” North said, exaggerating and emphasizing each word.

Kim is often caught with her guard down in North’s videos, giving fans a different side to the reality star.