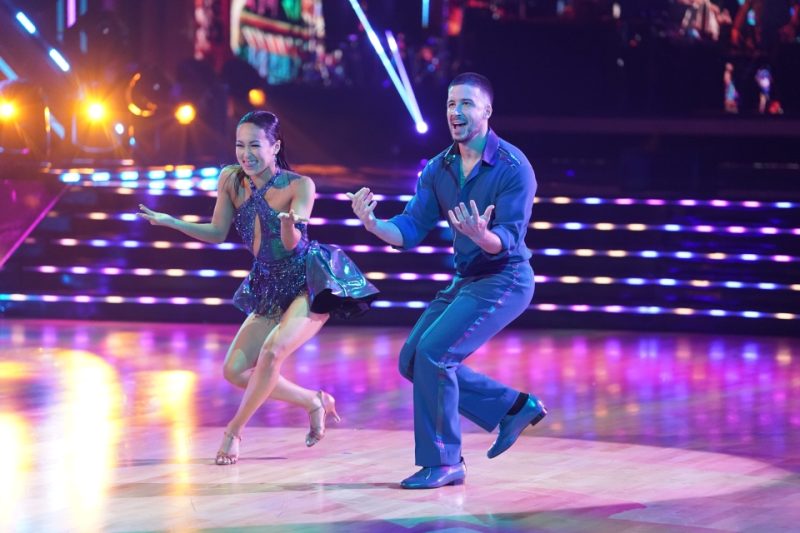 DANCING WITH THE STARS fans have been shocked by Jersey Shore’s Vinny Guadagnino’s NSFW comment on Bachelorette Gabby Windey’s post.

Gabby, 31, shared a video of her DTWS semi-final performance on her Instagram Tuesday.

The TV personality captioned the post, “We’re going to finale!!!!!”

She continued, “I’m filled with so many different emotions – excitement, fear, gratitude, and mourning that this experience will soon end. Thank you to everyone who has continued to support us and I hope to make you proud next week!!”

Fans of the Bachelorette rushed to congratulate the 31-year-old on her perfect scoring paso doble routine with partner Val Chmerkovskiy, 36.

One person commented: “You and Val totally deserve to be in the finale. Not only because of your talent but your work ethic! You rock.”

Another fan wrote: “Absolutely incredible Gabs!!! What a night!”

While a third commenter added: “So incredibly proud.”

One comment that stood out from the others was Jersey Shore star Vinny Guadagnino‘s congratulatory remark.

Fans of the MTV star were quick to respond to the comment with one person writing, “okay, wait a second….. I am entirely here for this!”

A third person commented: Y’all two just go ahead and get married, I approve.”

“Hook up!’ demanded a fourth while another asked, “can we make this a thing? Thx.”

A final commenter exclaimed: “I AM SO HEAR FOR THIS!!!!!”

Gabby Windey opened up about her split from fiancé Erich Schwer for the first time on Dancing With the Stars.

While preparing to perform, the reality star reflected on calling off her engagement, confessing that they weren’t suited.

Gabby sat down with her DWTS partner Val Chmerkovskiy to discuss their upcoming semifinal performance.

While prepping, she opened up about her recent breakup, saying: “The end of our relationship happened because we weren’t completely in step and in sync with each other in our common goals or just the way we approach life.”

The ABC starlet did not delve much further into the reasons for her split, but did admit: “We weren’t each other’s best match.”

Gabby added that she’s grateful to her father and stepmother for the influence they had on her and the way she views relationships.

After performing on Monday’s show, host Alfonso Ribeiro pushed her about the breakup once more.

He questioned: “Has it been hard dealing with a breakup on a show this intense?”

Gabby revealed: “Yeah, absolutely. There’s so many factors just in being able to stay present at practice.”

She added: “It’s hard to come and stay present but Val makes it easy.”

Viewers flocked to Twitter to react to Gabby discussing the end of her and Erich.

“Gabby getting the support she needs <3,” one user wrote.

Another viewer tweeted: “I feel bad for gabby having to talk about her break up on national television. My heart goes to you.”

“Wait gabby and the guy she got engaged to in the beginning of this season broke up?” a third DWTS fan asked.

Someone else tweeted: “A very gorgeous routine from Gabby so much respect for Gabby for staying together and continuing this after a breakup and still delivering well done such a gorgeous routine.”

Gabby previously hinted at plans to talk about Erich on her Instagram Story.

She posted a video from the studio on Sunday in which she said that people’s questions “will be answered.”

The star posted the video to ask fans to “pray for her” and vote for her and Val that they make it through this week.

“Um, hi, you guys. Obviously, it’s a big week and there’s a lot going on, but I just want to say thank you for your support,” she said in the video.

“Honestly, Val and I have been working out a**es off and can’t wait to show you tomorrow, so please don’t forget to vote. It’s such an important week.”

The DWTS contestant continued: “I’m dying and dying and trying to get into the finale and there’s like stiff-a** competition.”

The Bachelorette star then turned serious as she began to subtly talk about her split from her ex-fiance, Erich.

“And I know you guys have had a lot of questions, so I think they’ll be addressed tomorrow. Yeah, so thank you, guys. Please vote,” she said.

Gabby then ended the video by saying: “And by ‘I think,’ I mean I will be on tomorrow night’s episode of Dancing With The Stars. So, I’m off to rehearsal, but if you have a second, send up a prayer for this teeny tiny little dancer.”

Bachelorette fans reposted the video to Reddit and commented on what they thought she could be giving answers to.

“If Dancing With The Stars exposes Erich through an interpretive dance, I will subscribe to Disney Plus,” said one fan.

“If she comes on tomorrow and says anything about him doing work or something to that effect we will know they are faking a break-up and trying to rip a page off Matt and Rachael’s book. IMO that would be a terrible, disgusting move but I wouldn’t be surprised,” wrote another.

A third added: “Nothing like capitalizing your breakup on national TV. I guess it makes sense since the engagement also happened on another reality show but wow.”

GettyGabby opened up about her split from fiancé Erich Schwer for the first time on Dancing With the Stars.[/caption]