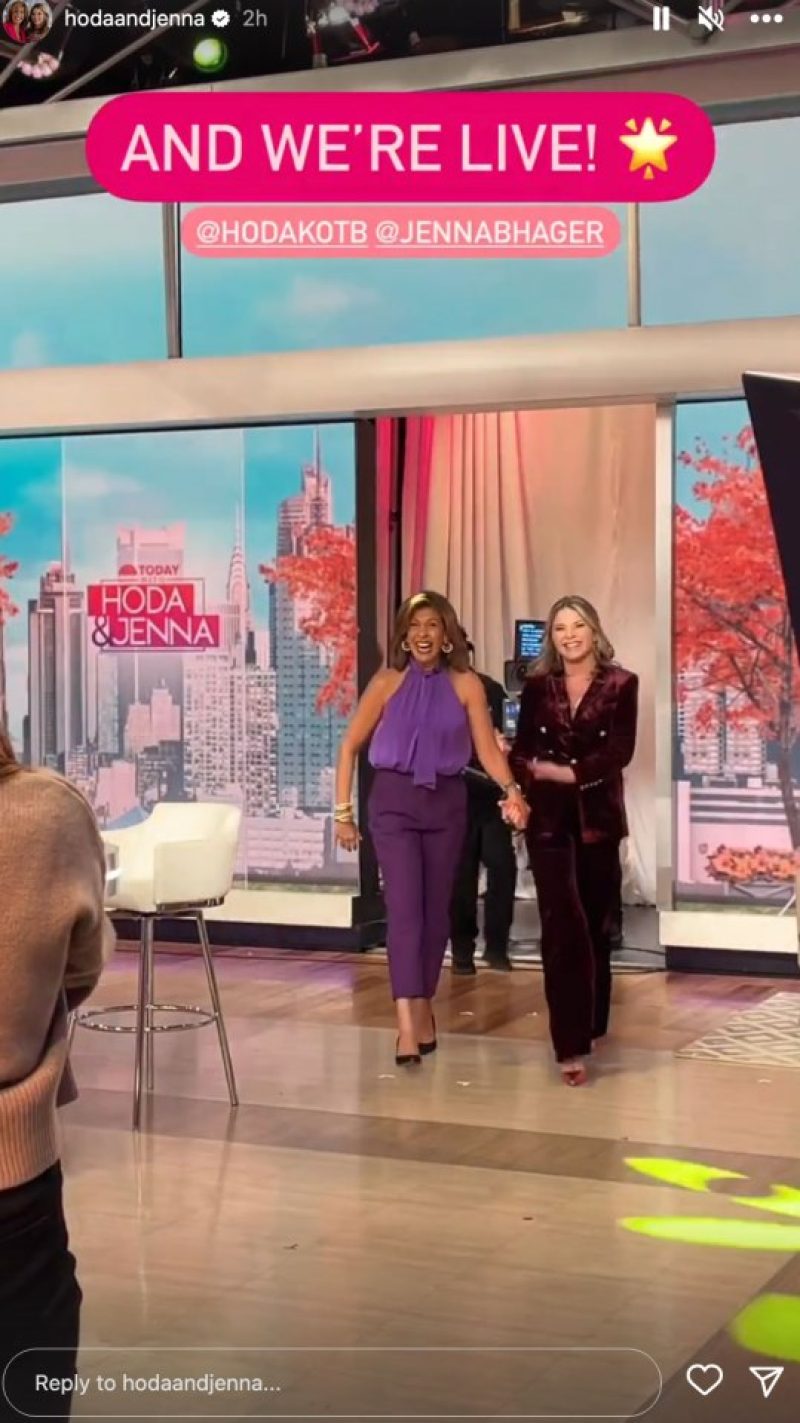 THE TODAY Show hosts Hoda Kotb and Jenna Bush Hager have held hands as they walked out from behind stage.

They debuted a major change to the studio on Monday when they brought back the studio audience and returned to studio 6A.

In an Instagram story, the hosts were seen holding hands and waving to the audience as they walked out from back stage.

Hoda excitedly skipped next to her co-host as the crowd cheered.

She and Jenna had huge smiles on their faces, excited for their new setup.

The women received a standing ovation as they greeted everyone.

“And we’re live,” the video caption read, along with a star emoji.

Today With Hoda and Jenna welcomed Michelle Obama and some musical guests to Monday’s show.

They are expected to also have Kelly Rowland, Jessica Biel, Tia Mowry, Jeff Goldblum, and Lauren Graham on this week.

It was the first time three years that the hosts were in front of an audience and reported from their regular studio, along with a live DJ.

However, this new setup might not be permanent, as the host announced last week that it might only last for a week.

Hoda and Jenna have been teasing the big announcement for weeks and finally told their viewers last week that they would be returning.

At the start of The Today Show’s fourth hour, the pair revealed that they would be welcoming back a studio audience.

“This is not any Monday, Jenna,” Hoda teased to her co-host.

“No, it is not just your typical Monday because we have a big announcement,” Jenna continued.

The ladies glared at the camera before gushing over the highly-anticipated news.

“First of all, we’ve been teasing it, and we’re very excited because this means a lot to Jenna and myself, and our show, and to you too!” Hoda said, pointing at the lens.

The co-hosts then geared up for the announcement by encouraging flashing lights and drumroll sounds from the crew.

“So guess what? Come hang with us because we have some great guests,” she teased.

As another incentive for fans to tune into the show, Hoda teased that there will be more surprises that they’re “not even allowed to talk about because they’re so huge.”

Savannah Guthrie, Craig Melvin, Dylan Dreyer, and Jacob Soboroff, all stood outside in the wind and cold.

Savanna asked: “Where’s Hoda?” and then proceeded to say they were in studio 6A with a live audience.

“Ok, we know you have a great crowd with you guys, but this crowd is pretty spectacular,” Hoda said.

“We’re in studio 6A again after three years,” Jenna said, to which the crowd cheered.

Hoda and Jenna told their co-hosts that Michelle Obama would be here and the rest of the hosts looked excited.

The pair then told the rest of them to “come on over” because they had four extra seats.

Savannah told them they would see them in a little bit.

Jenna invited over a woman at the TODAY studio who had a shirt on that read “Today I want to meet Hoda.”