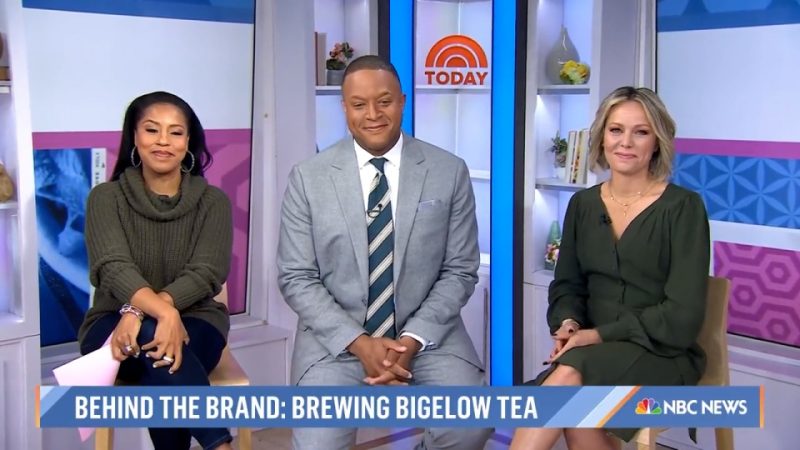 THE TODAY Show host Dylan Dreyer has mocked her co-host, Craig Melvin about the way he drinks his tea.

Their co-host Sheinelle Jones laughed at their interaction on live TV.

NBCSheinelle Jones, Craig Melvin, and Dylan Dreyer sampled tea that was in the studio after Sheinelle interviewed the CEO of Bigelow Tea[/caption]

NBCDylan made fun of Craig as he held up his pinky as he drank the beverage, Sheinelle laughed as the two argued[/caption]

On Monday’s show, Sheinelle talked to Cindy Bigelow, one of the CEOs of Bigelow Tea.

The host was taken through the production of the product and got to interview Cindy about the company.

At the end of the segment, Sheinelle, Craig, and Dylan all got to sample the tea in the studio.

As Sheinelle talked about the tea, Dylan gave Craig a weird look as he drank his tea with his pinky finger in the air.

“Would you put your pinky back? That is just so-,” she said, as Sheinelle laughed.

“It’s such a simple pleasure,” Sheinelle said as the two continued to argue.

“You have your pinky up,” Craig pointed to Dylan.

Dylan held the cup in her full hand as she sipped.

DON’T MESS WITH HER

Although the joke to Craig was light-hearted, Dylan warned people that she will be “waiting outside their door.”

Back in October, the meteorologist was featured alongside the rest of the TODAY Show’s anchors in the silly clip.

The group created a mock video of what their title sequence would be if they were cast in the Real Housewives franchise.

It included the same theme music and format the series usually uses before each episode to introduce the cast.

The clip concluded with the group gathered together, wearing colorful costume boas, crowns, and tiaras, while holding a Today show coffee cup.

Mimicking the Bravo series’ title in honor of BravoCon in New York City, they called themselves, The Real Anchors of Today.

While everyone came up with a funny message about themselves to include in the video, Dylan’s stood out as she targeted her enemies.

“My forecast is always sunny, but cross me, and I’ll be waiting outside your window,” the 41-year-old said.

The remark was quite different than her usual bubbly personality on-screen while doing the weather report.

The diss from Dylan comes after Craig returned to the morning show’s desk.

He had a series of absences as he reported for the show from far away locations.

Then on Tuesday, Craig and his wife, Lindsay, took some “kid-free time” to celebrate her birthday.

And while he technically appeared on the show via video, he did not return to the desk until Wednesday.