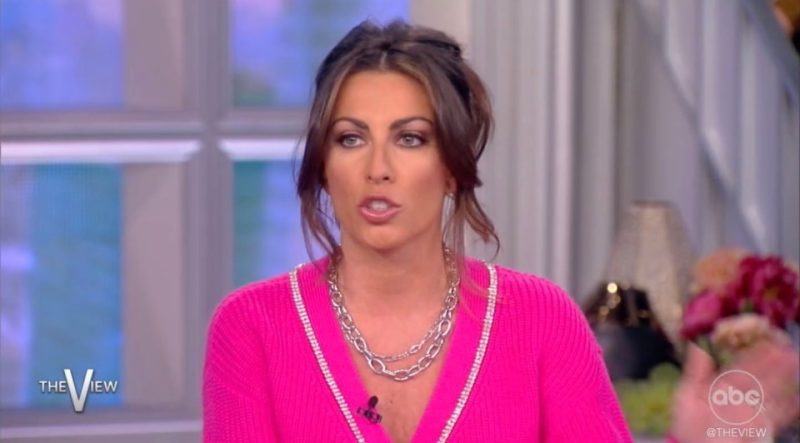 On Monday’s show, Alyssa said she got emotional watching the interview because she knows his daughter who was in the Capital during the insurrection.

Alyssa used to work in the White House with former President Donald Trump and Pence.

Meanwhile, Ana said she had no emotion watching it.

They then moved on to talking about the recent midterm elections, and Ana was happy because a Latina woman took one of the seats.

“Because Kamala Harris gets to break the tie, it is now going to be a Democratic held Senate and Mitch McConnell is no longer going to be majority leader,” she said.

As Ana paused to think about what else she wanted to say, Alyssa spoke up and said: “But, I do think, well, go ahead-.”

She did not look at Alyssa, who got quiet, as she continued talking.

After the host was done her point, Sara Haines spoke up.

In the middle of her sentence, Alyssa interrupted her as well, but Sara let her speak.

This isn’t the first time the hosts have snapped as Alyssa.

Earlier this month, Sunny Hostin got into a heated debate with the newcomer.

It all started when moderator, Whoopi Goldberg, 66, introduced their first topic of discussion about the midterm elections.

The ladies then debated the matter with co-hosts Joy Behar, 80, and Sunny, 54, bringing up the issue of inflation, which Sunny said was driven by “corporate greed.”

Sunny continued her point: “It’s become instead of Republicans having a real agenda, and having a real message on how they’re gonna help the country, they basically just have an anti-Biden message.

Alyssa attempted to interject with her opinions, but Sunny ignored her co-host and continued her thought.

“It’s really sad. The biggest picture here is only one party tried to subvert our democracy. Only one party did that.”

Alyssa again tried to enter the conversation, though Sunny wasn’t finished with her point.

“And that’s what we have to keep our eyes on and focus on,” she ended.

The talk show host then looked toward Alyssa, who was eager to enter the discussion.

The 33-year-old agreed with President Biden’s statements, though she didn’t believe it was the appropriate closing argument for Democrats.

Anticipating pushback from viewers, she addressed the audience, saying: “I regret to say, I know this is not what the audience wants to hear, I think there’s gonna be a red wave, and I think it’s because Democrats have said things like -“

The TV star was cut off by Joy booing her for her opposing thought.

“Democrats have said things, inflation is a global phenomenon. Well, that doesn’t help me put food on my table. Or say the war in Ukraine is to blame for the high gas prices. That doesn’t help me fill my tank. So, folks are voting on a referendum -“

She was interrupted again, this time by Sunny, who asked: “To just lie to people?”

“No, they’re voting on a referendum of a party of power,” Alyssa explained.

The battle began as the ladies of The View discussed recent remarks from Donald Trump, aimed at Senate Republican leader Mitch McConnell, that some found threatening and racist.

Ana pulled no punches in describing the former president: “This is on-brand for Donald Trump. He was a racist before being president, he was a racist as president, and he’s going to be a racist until the day he dies.”

But then, she seemed to draw her attention to Alyssa, who before joining the show served as the Trump administration’s communications director.

“Yes, Ana, say it louder for all!” one viewer tweeted, while another added: “Anna spitting truth!”

While one viewer explained: “My girl Ana just threw shade towards Alyssa when she said all the folks that “worked” for Trump enabled Trump’s racist behavior.”

The republican host tried to defend herself, responding: “I’m guilty as somebody who hoped to see the best in him. Hoped he had a vision and he wasn’t as bad as the worst of what we saw. But I’m here to tell you guys at home, he is worse than what you see.

Alyssa has been a repeated target for her more liberal co-hosts.

Both women just joined this season as permanent hosts after being fill-ins last season.

ABCAlyssa interrupted Host Sara Haines as well, but she let the newcomer speak[/caption]