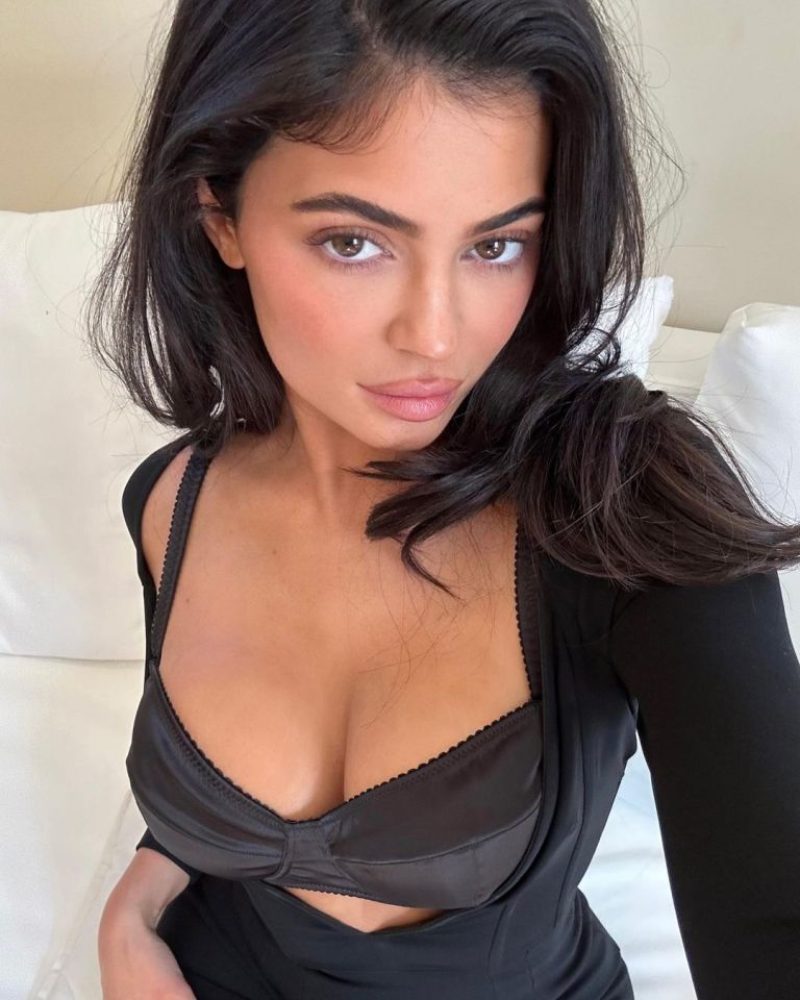 KYLIE Jenner has nearly burst out of a black silk bra in racy new photos from inside the star’s bedroom.

The Hulu star shared several thirst trap-type photos on social media in recent weeks, prompting some fans to think she and her boyfriend, Travis Scott, 31, are on the rocks.

Kylie, 25, posted the most recent set of eye-catching photos on her Instagram Monday.

Taken while lying in bed, the Keeping Up With the Kardashians alum poses against her white linens while wearing a long-sleeved black dress.

Her top skintight dress is zipped open revealing the black silk bra underneath.

The makeup mogul stares seductively up at the camera, biting on her long black fingernails in one photo while hiding behind her dark hair in another.

Fans rushed to give their take on the reality star’s sultry photos, with one, Travis Scott quoting person, commenting: “I get those goosebumps every time.”

A third commenter added, “king kylie selfies are back people.”

While another Instagram follower asked, “Did they end their relationship?”

The “they” the fan is referring to is Kylie and her rapper-boyfriend, and father to her children, Travis Scott.

Kylie recently posted another set of pics, in which she showed off major cleavage in a corset, that prompted Kardashian fans to think she and Travis had broken up.

The low-cut ensemble barely covered Kylie’s chest as she perched herself on top of a bed with white sheets and pillows, with her dark, wet locks falling in front of her face.

The lens focused on the reality star’s bare legs in one shot while another got an overhead look at her hourglass frame.

Kylie teased in the caption: “in ur dreams,” with a flaming heart emoji.

Fans gushed over the model’s gorgeous photos in the comments, though many wondered if they were a sign she had split from Travis.

“Travis really took the L,” one person remarked as another theorized, “She’s posting her after-breakup pictures.”

“Honey, Travis cheated on you, you doing karma job or what?!!!” wrote a third.

“In Travis Scott’s dreams,” said a fourth, while a slew of others called out Travis for allegedly cheating on the beauty mogul.

The speculation began last week when the rapper’s ex-Rojean Kar shared a short clip of her “directing” a video.

The clip, posted to her Instagram Stories, showed the father-of-two chatting with two other people.

The model captioned her post: “I’m directing obvi,” with the winky face emoji.

Viewers were appalled by the clip that seemed to blatantly feature Travis.

One trolled in an online thread: “TheShadeRoom posted this on IG, and Rojean commented ‘l didn’t even realize he was there. Yall need to stop perpetuating this s**t’ lmao. Like girl stop the cap.”

A second remarked: “Lol she angled this vid to the precise degree to include him in it.”

A third ranted: “If I saw an ex/someone I had any sort of relationship with, I would KNOW good and damn well if they were in the room lmaooo she needs to quit lying.”

“She going out sad either way cuz it’s trifling and you know you’re wrong for flaunting it at all,” a fourth complained.

“She is obsessed and deranged but he likes it and has no repercussions from Kylie so why not,” a fifth noted.

“That’s crazy. Imagine being proud of this,” a final added.

Rojean and Travis have been rumored to have an ongoing relationship since 2013.

On Saturday, the Goosebumps rapper took to his Instagram Stories to address the chatter, claiming Rojean’s claims are “fictional.”

“It’s a lot of weird s**t going on. An uninvited person was sneaking photos on. What was supposed to be. A closed set while I was directing a video.

“I’m saying this for the last time. I don’t know this person. I’ve never been with this person. So please stop with the continuous cyber games and the fictional storytelling,” his post concluded.

Travis later shared a screenshot of a comment from Los Angeles-based marketing liaison Courtney Couch, who has worked closely with the rap star.

She defended her friend, writing: “big cap. i’ve been working with travis for 8 years + i was on set all day as he was directing a video for another artist. this lady is delusional + she was not there with him. he does not f**k with her in any way. nothing else to see here,” with two sleepy face emojis.

The TV star continued to maintain his innocence by posting a photo he previously shared from Valentine’s Day earlier this year.

The blurry pic showed a romantic dinner setting for two adults and one child, presumably for his girlfriend, Kylie, and their 4-year-old daughter, Stormi.

He included the words: “If you wasn’t at this table on V day then u wasn’t with me.”