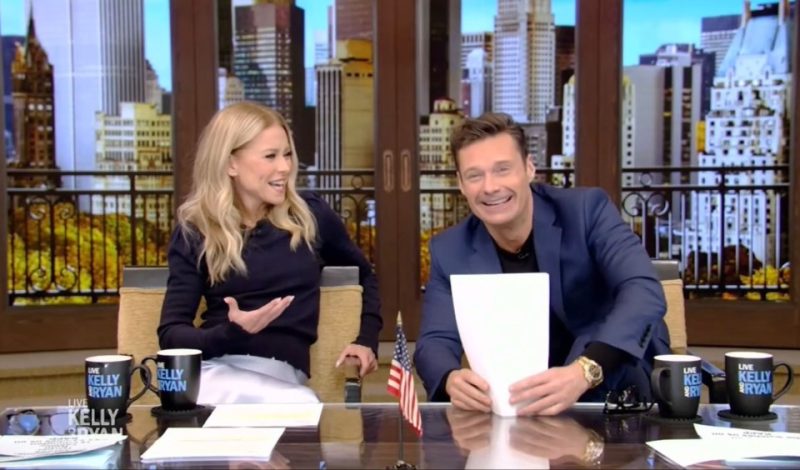 KELLY Ripa has given her Live co-host Ryan Seacrest an NSFW interrogation after he shared a story on air about a recent shower experience of his.

The actress, 52, has questioned her colleague about the “sensitivity” of one of his body parts during the risqué discussion.

During Monday’s episode of Live with Kelly and Ryan, the hosting duo got to talking about having to walk by fragrances while shopping in stores.

The conversation got Ryan thinking about a recent experience of his, though it was off on a tangent from the original topic.

He began his personal tale: “True story: Within the last four or five days, this has happened in my shower.”

Before he continued, Kelly took a moment to look slyly right into the camera based on Ryan’s first sentence alone.

He then added: “There’s a female production, lotion, fragrance. There’s a brand that does a lotion, it smells very significant – like, you recognize it.

“It’s a deliberate scent. And I love it! They have the fragrance, and they have the moisturizer.

“So, I’m in the shower the other day, and I’m soaping myself up, and I’m smelling that scent. And I’m like, ‘What is going on here?’ Turns out, they make a soap.

“And somebody put that same soap with that incredible female fragrance in my shower. And, I gotta tell you, every morning, I’m soaping myself up with that, and it feels so good.”

After looking like she was trying so hard not to jump in with a witty remark during his entire story, Kelly eventually was able to jokingly ask: “Are you experiencing any nipple sensitivity?”

Clearly not expecting that, the American Idol host burst out laughing at his co-star’s NSFW question.

“Feeling emotional, or?” Kelly went on.

They both just cracked up over the All My Children alum’s jokes about Ryan’s shower story.

Kelly and Ryan often bring up NSFW topics and banter during their talk show.

First, the duo discussed the Powerball lottery, which had seen some complications in picking the winner.

“It’s delayed,” Kelly shared, adding: “I guess they’re saying they needed extra time to complete the required security protocols to pull the balls out of the thing.”

The crowd erupted in laughter at the sexual innuendo, as Kelly continued: “You know I didn’t realize there was so much involved. I thought the suction device just suctioned up my winning numbers.”

Ryan replied: “Have you ever been near that device when it’s sucking the balls?”

“No,” Kelly shot back as the crowd laughed once more, “No, why Ryan. Have you?”

“Yes I have. It’s like the most exciting thing,” he responded, as Kelly continued: “When that thing sucks it up?”

A few minutes later the dynamic duo discussed a “National service warning” taking place to “remind everyone to please not lick the toads,” which some had been doing because of a psychedelic effect.

Kelly went on: “I tell ya I’ve never really thought of licking a toad before, but they tend to be seven inches long. Tell me you don’t want to lick that!”

She continued: “All seven inches of it. It can make you sick if you put one of these guys in your mouth,” as she smiled slyly at the crowd.

LIVE WITH KELLY AND RYANWABC