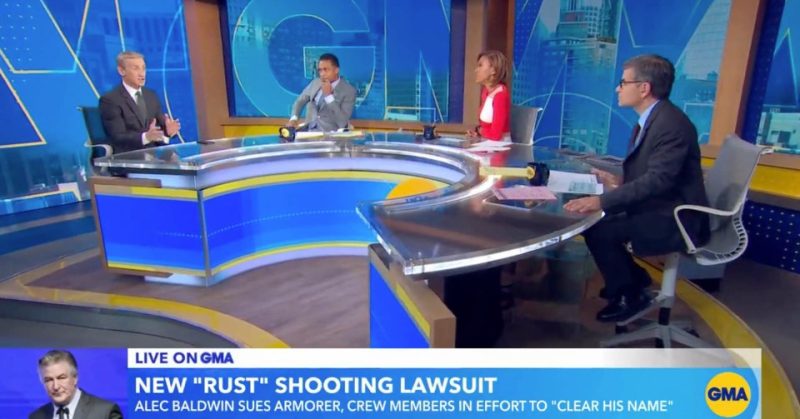 GOOD Morning America host Michael Strahan has been replaced by a fan-favorite host on Monday’s show.

Robin Roberts, George Stephanopoulos, and fan-favorite TJ Holmes all sat behind the desk on Monday’s show.

TJ filled in for the host last week and many times in the past.

“FOX NFL SUNDAY is live from Al Udeid Air Base in Qatar with a two-hour show beginning RIGHT NOW in @NFLonFOX,” he captioned the post.

The GMA host posted a video of himself in Qatar.

There were a bunch of soldiers behind him all lined up and they cheered as Michael panned the camera around.

In the end, he gave a thumbs up and smiled.

Michael also posted videos to his story of him teaching the soldiers how to play football.

He has sparked concern recently as he was absent throughout most of last week.

On Sunday, Michael was tackled by an airman at the air force base he was reporting from.

He played a friendly game of football with military heroes at Al Udeid Air Base for NFL on Fox.

Michael, who looked smart in a navy suit, tried to advance through a group of airmen on stage during the game.

One of them swiftly blocked the broadcaster and sent him flying to the other side.

His teammates laughed and cheered him on as Michael staggered back and jogged around the edge of the stage.

Taking the rebuff in his stride, the Hall Of Famer jogged back over and pointed at the airman, yelling: “He’s good!”

Last week, Michael also explained why he wasn’t behind the desk.

He went on an expedition in Canada to see polar bears during a segment on how their homes were under threat from the climate crisis.

As he wrapped up his time in the snowy region, Michael threw himself down in the snow to make snow angels before sending it back to the New York City studio.

“I’m gonna bring you guys on our journey through the tundra,” Michael said in the live segment.

“You’re gonna meet all the polar bears that we did and you get to learn about the ways that we can still save the bear which in turn is really saving ourselves.”

“I’m looking forward to sharing that with you guys tomorrow, but until then, watch this! You guys can’t do this can you?”

Michael then threw himself into the snow and began to make snow angels.

“Back to you in the studio!” He shouted from the ground.

The official Instagram account for GMA shared the video on Instagram saying, “When you’re reporting from a winter wonderland snow angels are a must! Right @michaelstrahan?”