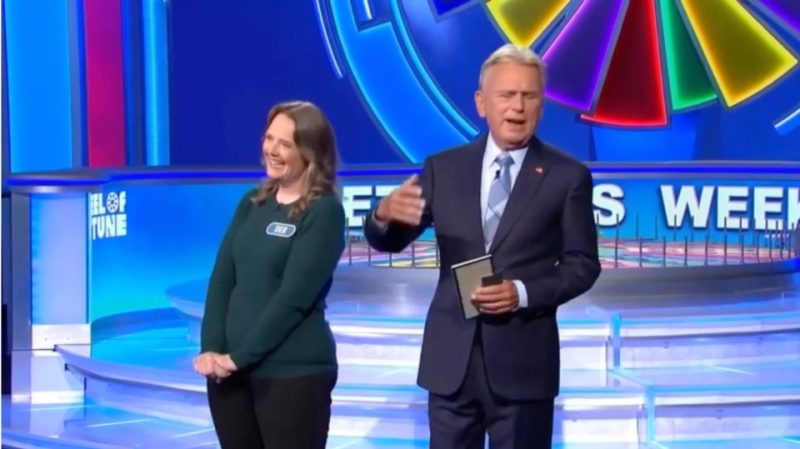 PAT Sajak felt the need to apologize to a recent Wheel of Fortune contestant, and admitted how tricky her bonus puzzle was.

But fans weren’t forgiving, slamming the show for what they called a “stupid” puzzle, and complaining producers wanted the contestant to lose.

Earlier this week, Deb Inovejas from Vail, Arizona made it to the final round – a phrase.

After filling in the given letters, R,S,T,L,N and E, Deb added M,B,O and V.

The three-word puzzle lit up with letters, revealing a board that read: -E LOVE —- .

The first word could be easily deduced as “WE,” while the second was completely exposed as “LOVE.”

But without a single hint in the final five-letter word, it would be near impossible to figure it out.

Even Pat recognized that.

“Well, there are lots of options,” he chuckled. “Just say everything you can think of and maybe the right thing will spill out.”

Deb did just that, guessing “We love America,” “We love Wheel,” and even “We love Vanna.”

“All those things are true but wrong!” Pat cried out.

Then the host offered an apology.

“I’m sorry,” he said to the contestant. “The P might have done it for you, or maybe even the A.”

“That puzzle was honestly plain stupid!” one person exclaimed.

Another surmised: “When they want them to lose they’ll give them a puzzle with a lot of Z’s and Q’s.”

While one person simply wondered: “Has anyone actually said WE LOVE PIZZA in their lives?”

Deb may have lost out, but one other contestant this week scored big.

Pat seemed doubtful that Laura could do it, remarking: “That’s all you’re getting…”

The presenter then clocked Laura’s triumphant grin and added: “But look, she’s smiling! I think she might do it!”

Laura then said, “His man cave,” to everyone’s shock.

As she celebrated with her hands in the air, Pat stood next to her looking stunned.

He eventually gathered himself and said to her: “You’re not embarrassing your daughter tonight, that’s for sure! Wow.”

Pat has been hosting America’s Game since 1981, with his co-host Vanna White joining him the following year.

But in September, he told Entertainment Tonight: “Years go by fast. We’re getting near the end.

It comes after fans called for him to either retire or be fired as they grow increasingly sick of his on-screen demeanor.

ABCFans say when the puzzle has a ‘Z’, the show wants the contestant to lose[/caption]

Another contestant left Pat speechless after solving a tough puzzle