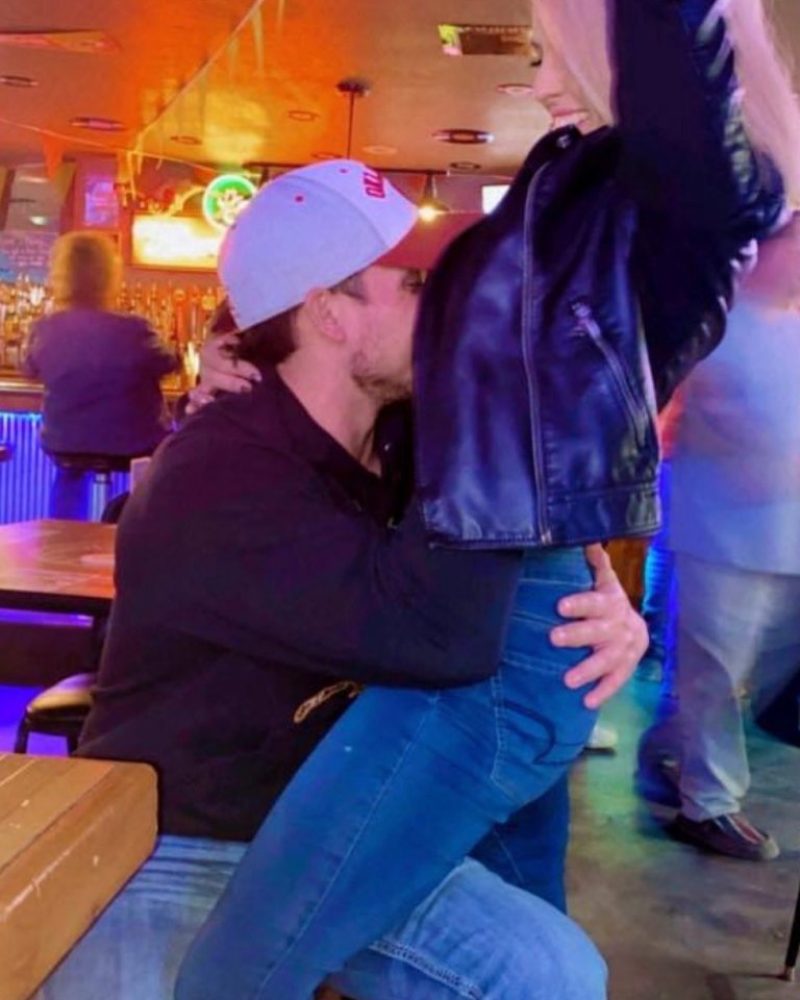 The reality star revealed his new lover in photos earlier this week.

Josh, 29, has gotten more comfortable with his partner, based on a sexy snap he shared on Instagram.

On Saturday, the father-of-three posted a pic of his girlfriend, Haile, straddling him at a bar.

The Teen Mom OG alum pressed his lips to her breasts, hiding behind her jacket and his baseball cap.

Earlier this week, fans were introduced to Josh’s new girlfriend after she shared a photo of the pair on her Instagram.

The snap showed the couple cuddled together as they enjoyed a night out.

Teen Mom fans reposted the photo of the lovebirds on a popular Instagram fan page.

The post explained, “#JoshMcKee new girlfriend, Halie. Josh and Halie have a total of 5 kids collectively when the whole crew gets together because she has 2 beautiful daughters of her own.”

Fans weighed in on the new romance in the comments, with many pointing out Haile’s striking resemblance to his ex-Mackenzie.

One person wrote: “He has a type.”

A second fan agreed: “Josh definitely has a type, lol.”

While a fourth stated: “Color me surprised he’s already moved on.”

Josh wasted no time showing that he was back on the market, as he ditched his wedding ring and flaunted his abs in a shirtless selfie soon after his split from Mackenzie.

Josh took to Instagram to flex his muscles in the mirror pic, which he captioned: “The pain is worth the growth!”

Aside from his choice of wardrobe, or lack thereof, fans immediately noticed the young dad’s ringless left finger.

One fan commented, “Oooo, no wedding ring?” while another said, “So handsome.”

In September, Mackenzie hard-launched her new boyfriend, two months after parting ways with her children’s father.

The ex-MTV star sparked new romance rumors after giving a mystery man a hair makeover in a TikTok video.

Mackenzie resurfaced with the same guy, Dimitri, in a second video.

The 28-year-old’s new beau took to his own platform to share an update after Hurricane Ian passed through Sarasota, Florida.

He stood in Mackenzie’s kitchen and danced to a country song as she cleaned the dishes.

Halfway through, the TV personality turned to face the camera, giving fans a soft smile before grinding on Dimitri.

The fitness guru’s new love interest smiled brightly at the camera before it cut out.

He captioned his post: “We survived Ian,” with the cowboy emoji.

Fans have followed Mackenzie’s marriage problems involving Josh cheating in their marriage over the years.

But she admitted she also cheated and carried on an affair for six months.

The TV star and her husband then reconciled and bought a $525K house together.

She also defended his infidelity during an April Instagram Q&A.

The former couple ultimately decided to end their marriage months later and are co-parenting their three children.

Josh and Mackenzie are parents to Gannon, 11; Jaxie, eight; and Broncs, six.

Earlier this week, Josh revealed his new girlfriend after she shared a snap of them together during a night outInstagram/ halienlowInstagram / Josh McKeeJosh recently posted a shirtless selfie without his wedding ring[/caption]