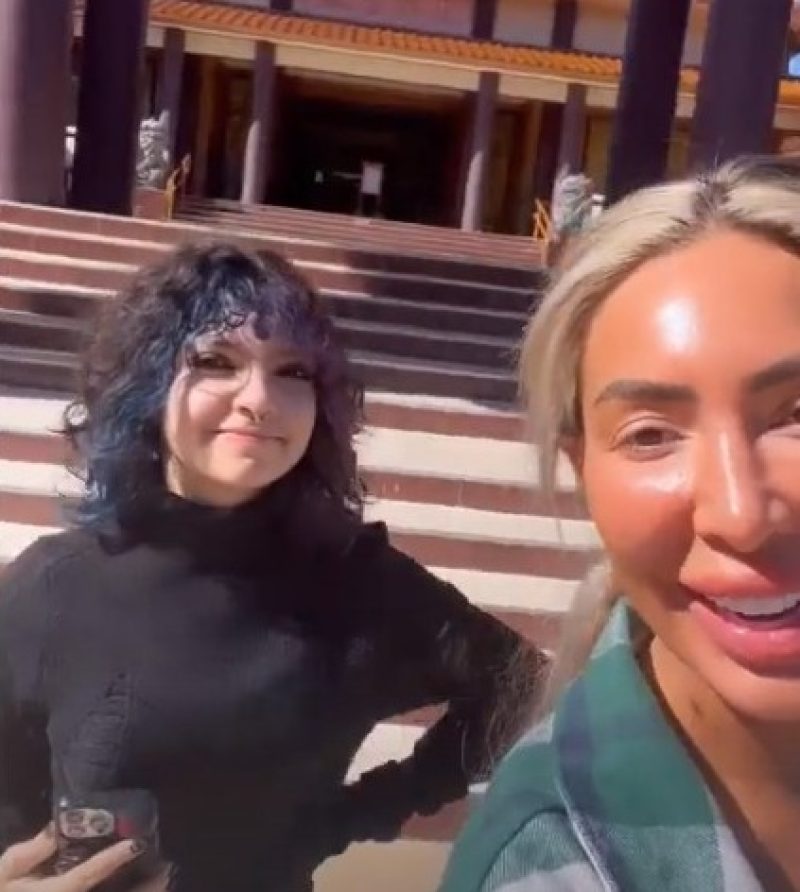 In a slew of Instagram stories, Farrah, 31, shared her visit to the International Buddhist Progress Society in Hacienda Heights, California.

The Teen Mom OG alum filmed herself as she walked around the parking lot and stood under the entrance.

The former MTV star then pointed the camera at her teen daughter, who had curly black hair with blue and purple locks.

Along with a nose ring, Sophia dressed in an all-black ensemble, wore ripped jeans, and had matching acrylic nails.

The teen girl fixed her hair as her mother said: “Oh my gosh! Buddha time!”

The mother/daughter duo then headed inside the Buddhist temple and gathered with the other visitors.

In the photo, the entire group had their hands folded as they posed with the bhikkhu, the ordained male in Buddhist monasticism.

Recently, the teenage daughter of the Teen Mom star showed off her mature look.

Sophia appeared to be hawking brain supplements from a store.

Sophia appeared to be hawking brain supplements from a store.

She donned a black hoodie with blue jeans, and her nails were painted black to match the sweatshirt.

Back in September, during an interview with In Touch, the reality star gushed about how her daughter encouraged her to get a tattoo.

The TV star said: “Sophia has been asking about tattoos, and I do not have them.

“I’m not saying anything bad about tattoos. My friends have them. People have them.

“I am not really about tattoos, but Sophia really does like those tattoos.”

The MTV mom added: “Sophia has definitely been making me, tries to make me, go into tattoo parlors late, and I have no idea what that’s about.”

Sophia was previously granted permission by her mother to get her septum pierced.

In February, the teenager celebrated her 13th birthday by getting her nose pierced.

Sophia shared a video of herself as she visited a piercing salon.

While sitting in front of a technician, Farrah’s daughter winced as the needle went through her nose.

Sophia captioned the clip: “I got my septum piercing for my birthday! I am so happy with how it turned out!

“I am the first person in my family to get a septum piercing at 13! Birthday wish came true!”

Farrah commented: “SOPHIA THE FIRST. The first 13-year-old in the family to get a septum piercing! Birthday wishes do come true!

Sophie’s mother also shared graphic images of the moment the needle went through the nose and the end result on social media.

PrevPreviousBudd Friedman dead at 90: Famous comedy club Improv owner passes away just days after ‘feeling sick’ & going to hospital
NextPrince Philip wanted to sue The Crown after episode blaming him for the death of his sister left him ‘very upset’Next