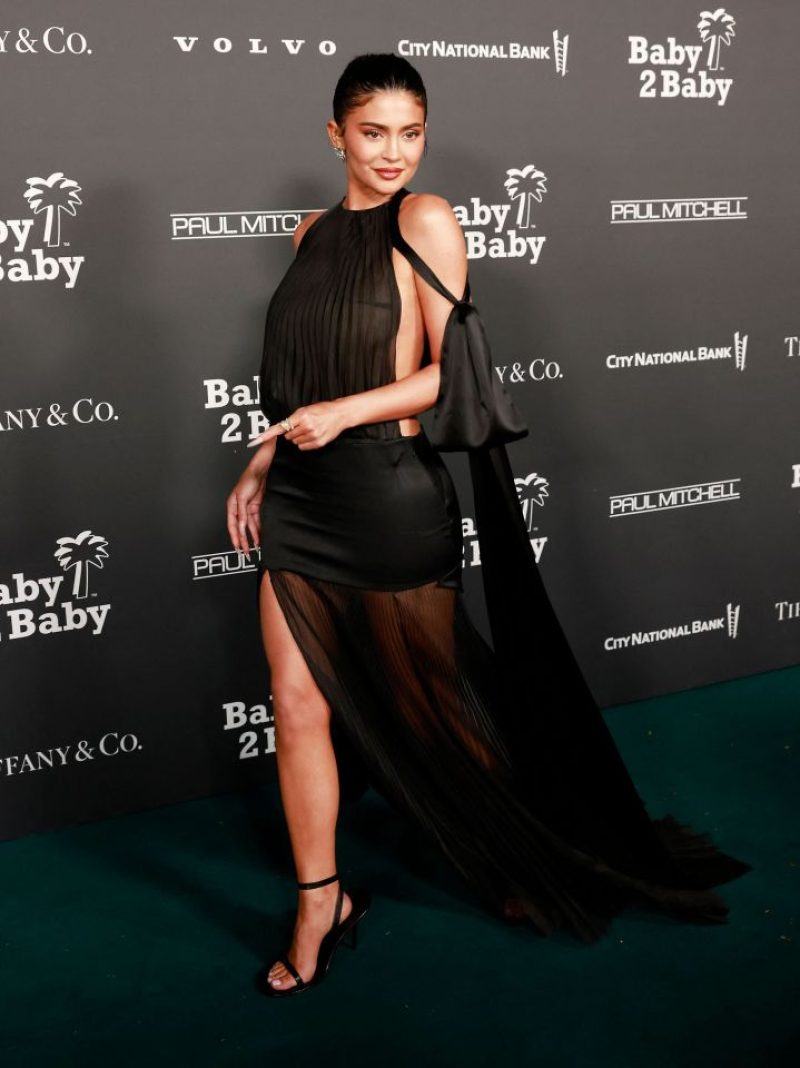 KYLIE Jenner has flaunted her curvy figure in a sexy dress as fans point out an interesting detail about her backside.

The reality star turned heads in the skimpy ensemble at the 2022 Baby2Baby Gala on Saturday night.

Kylie, 25, attended the event at the Pacific Design Center in West Hollywood, California, alongside some members of her famous family.

Photos captured the beauty mogul posing on the dark green carpet with her sister, Kim Kardashian, 42, who rocked a skintight pink gown.

Kylie’s all-black look consisted of a mini dress with an open back and sheer skirt exposing her bare legs.

She completed the outfit with black strappy heels, big studded earrings, and her dark hair in a tight bun.

Her mother, Kris Jenner, 67, and the momager’s boyfriend, Corey Gamble, 42, were also posing for photos nearby.

However, fans were drawn to Kylie’s revealing attire as numerous photos captured her peering over her shoulder to display the dress’ unique backing.

The snaps also highlighted the Hulu personality’s rear end – which became a topic of discussion in an online thread.

One fan took to the thread to suggest that Kylie got her rumored Brazilian butt life removed based on the photos.

They included a snap from the evening alongside an older photo showing Kylie with a noticeably fuller backside.

Some agreed with the theory, with one writing: “They’ve all gotten some kind of BBL reduction that was probably lipo in addition to the weight loss.

Another protested: “Her body is so beautiful. I don’t want her to turn so skinny. They’ve all changed to Kendall [Jenner] ‘s body. Only [she] and Kourtney [Kardashian] are left.”

A third chimed in: “People don’t seem to agree with me, but I guarantee she’s on her way to skinny all over, right behind her sisters.

“She followed them with the insane curves, the BBLs, the carved face…she’s gonna follow them to angular too. (She’s already thin, but I think in a few months, we’ll start seeing her really lean out).”

And a fourth said: “Absolutely. Rail thin is the trend they are pushing.”

Others weren’t convinced, contributing her seemingly smaller rear end to the photos’ angles and weight loss.

One commented: “No, I think her butt still looked big in the other pictures she posted- [it] does seem like she might be losing weight overall, though.”

A second wrote: “Nope, just losing weight. Gonna be the next one after Khloe [Kardashian] and Kim to be too skinny. Sigh.”

Like her sisters, Kylie has repeated in interviews that she hasn’t had plastic surgery, insisting lip filler was her only beauty vice.

The TV star hasn’t revealed if she enhanced her backside with cosmetic surgery, but she has been vulnerable about her changed physique since giving birth to two children.

On a previous episode of The Kardashians, Kylie talked to her mother about her feelings regarding her fluctuating weight.

“I feel like with your first baby, it’s like a shock to see your body change so much,” she began.

“This time around, I don’t feel that way at all.”

“I’m way less stressed about my weight and what I look like and way more into the feminine energy and the fact that I made a baby.”

She also recently showed off her stretch marks after welcoming her second child, a son, with Travis Scott.

Kylie and Travis, 31, are also parents to a 4-year-old daughter, Stormi.

She previously told her fans that she gained 60 pounds during her pregnancy with her youngest child as she hit the gym in an effort to slim down again.