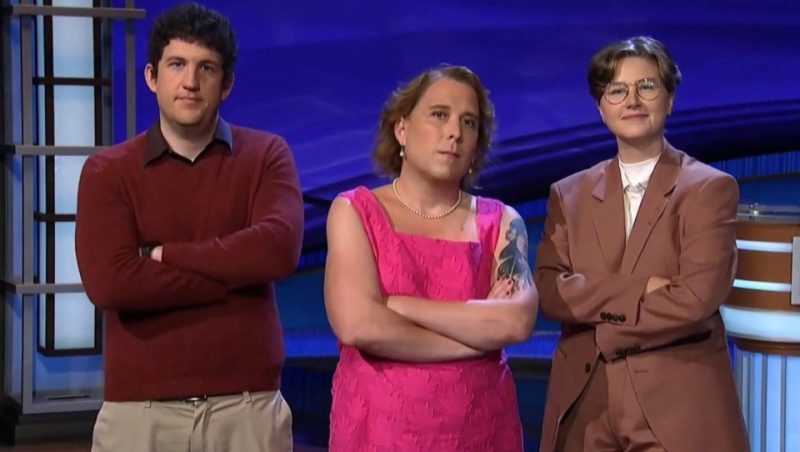 JEOPARDY! fans have pointed out an interesting detail about contestants Amy Schneider, Matt Amodio, and Mattea Roach during the Tournament of Champions.

The trio created quite the buzz from viewers who tuned in to watch the games throughout the week.

JeopardyAmy, Matt, and Matteo are three of the top 5 highest-earning competitors in the show’s history[/caption]

Last month, the game show announced that the tournament’s three biggest champs were automatically getting bumped up to the semi-finals round.

EP Mike Davies earlier explained that this was to make the competition fairer, as the three are “so far ahead of the curve” that they felt it would be unfair to place them in a lower bracket.

The move meant they would not have to play in the quarter-final rounds but would compete against the winners.

Soon after, Jeopardy! shared the highly-anticipated matchups, splitting up the three champs to play against other tough competitors.

Jeopardy!’s Mattea Roach admits she had a ‘stress dream’ before stunning loss

Amy was pinned against Maureen O’Neil and Tyler Rhode on Wednesday, Matt battled John Focht and Sam Buttrey on Thursday, and Matteo challenged Eric Ahasic and Andrew He on Friday.

Prior to the episodes airing, fans took to a popular Jeopardy! forum to weigh in with their thoughts on this year’s stiff competition.

Amidst the discussion, some fans pointed out the legendary lineup, featuring the top highest-ranking champs in the show’s history

“Can’t wait – including Ken [Jennings], there will be 4 of the top 5 all-time on the stage!” one person commented.

“Can’t wait to see that match of the big 3,” said another.

Coincidentally, the highest-earning contestant and first-place title-holder is host Ken Jennings, who competed on the show before taking over as co-host for the late Alex Trebek.

While Matt and Matteo came up short in their round, Amy advanced to the finals, where she’ll play her knowledge against Sam Buttrey and Andrew He.

The three finalists will play until one wins three matches – which could take three days or stretch for seven showdowns.

The tournament finals will kick off on Monday, November 14.

Regular episodes and reigning ace Cris Pannullo will return in mid-November when the tournament concludes.

JeopardyAmy, Matt, and Matteo were automatically bumped up to the semi-finals round, bypassing the quarter-finals[/caption]