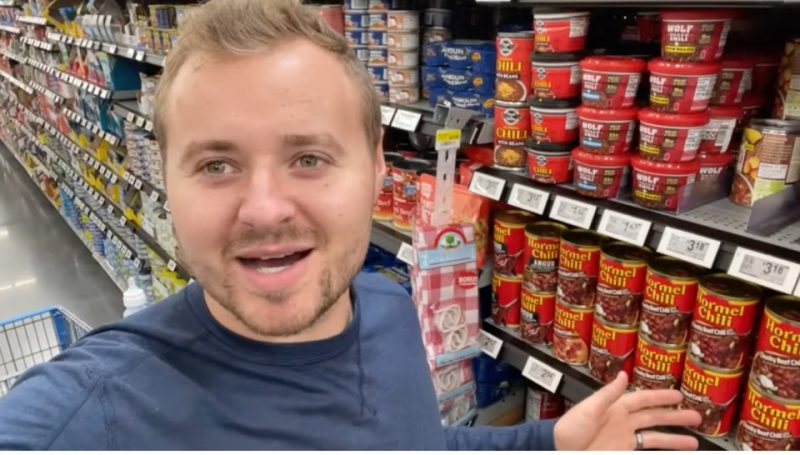 JED Duggar has been slammed online for his unique take on chili, after showing it off in a new video.

The Counting On alum was vying against his fellow family members at an annual family festival.

Each year, the extended family comes together for annual Duggar Family Fall Festival.

Among the events is a chili cook off, but it seems Jed is no master chef.

In a video he shared on YouTube, the 23-year-old went shopping for ingredients at his local Walmart, before coming up with another plan.

“Guys, this is crazy, but I’m going to do it,” Jed said to the camera. “I’m literally just going to pick a bunch of different types of chili, mix them together and see if I can win this competition.”

Jed Duggar responds to rumors he is ‘brainwashed’ by controversial family

He then gathered a variety of canned chilis from different companies for his experiment.

Fans in a online thread, however, couldn’t digest it.

“That chili looked so gross!!” one person exclaimed, as another added: “I don’t even get what he was trying to do? He made it sound like it was like a prank or something for the judges at first.”

A third person was thinking of others: “I just feel bad for those judges that had to eat the stuff.”

“Gordon Ramsey would tear these fools to shreds!” a user added referring to the famous chef.

Needless to say, Jed’s chili didn’t place in the top three – out of five total competitors.

Jed and his wife, Katey Duggar, are no strangers to being shredded by others, especially for their parenting.

In July, Jed posted a photo of his son, Truett, on Instagram.

Truett was dressed in khaki pants, a white button-down shirt with a blue design on it, and white and pink shoes.

In the three photos, the then two-month-old sat on the grass, stood with the help of his parents, and made a funny face as he laid in his father’s arms.

But some fans keyed in on the pacifier that was clipped to the baby’s shirt.

According to the Consumer Product Safety Commission, a product similar to Truett’s had been recalled and deemed a “Choking hazard.”

“That pacifier clip has been recalled since the string can break and the child can choke on the individual beads. So I see they’re following right along with the Duggar safety standards!” one critic said at the time.

Jed and Katey were also slammed for another video they shared, documenting their RV camping trip and their excitement of trying out the vehicle with their newborn.

While meeting up with the Duggars for a cookout, Jed and Katey showed off the baby in his adorable basket to the family.

However, at one point, the baby basket was set directly underneath the grill.

Fans were outraged by the action and circulated a snap from the YouTube video on a forum.

One wondered: “Y’all, why do they have this baby sitting under a grill?”

A second asked: “They couldn’t have found literally anywhere else for the kid to be?”

Another fan chimed in with: “Anybody who was around them that day clearly lacks common sense for them not to correct where the baby is.”

PrevPreviousPrince Philip wanted to sue The Crown after episode blaming him for the death of his sister left him ‘very upset’
NextLong Island Medium Theresa Caputo, 55, flaunts her curves in tight green dress for family pics- but fans blast huge hairNext