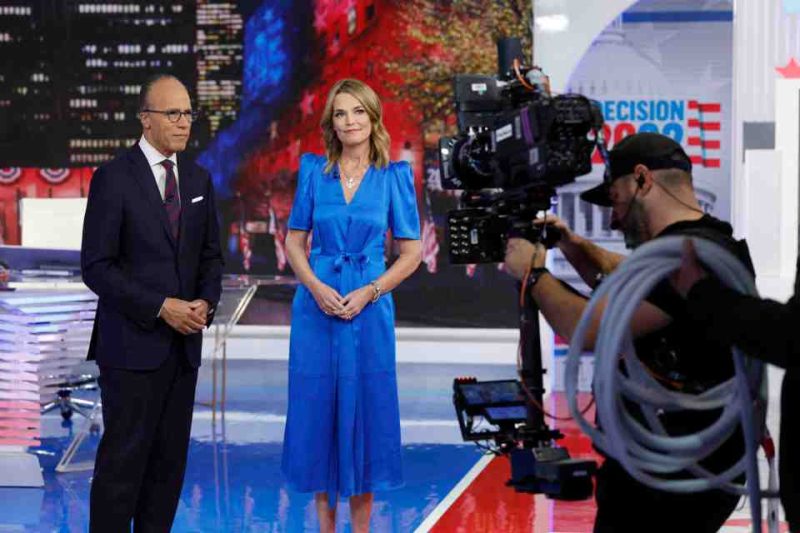 TODAY’S Savannah Guthrie has been criticized by fans over her Election night outfit.

Savannah shared photos from the evening on Instagram, showing her and NBC Nightly News anchor Lester Holt, 63, reporting in front of the camera.

In another snap, the duo sat on the panel with Meet the Press moderator and NBC News political director Chuck Todd, Andrea Mitchell, and Hallie Jackson.

She completed the look with a silver heart necklace and her brunette locks in loose waves.

The Today Show host’s wardrobe selection elicited an outpouring of remarks from her followers in the comments.

While many loved the brightly-colored ensemble, others thought the look was “unprofessional” for a political election.

“Did you choose blue on purpose? Because you’re so unbiased?” one person commented.

“I thought journalists were supposed to be NON BIASED,” echoed another.

“Lady, what are you doing? You acted unprofessional,” a third stated.

Meanwhile, others raved over Savannah’s dress choice, with one writing: “Beautiful in blue!” and another gushed: “The dress is just perfection!!!”

A third person commented: “Love your dress and your style every day!” while a fourth added: “Nice job! Love that dress on you!”

Someone else wrote: “Love the blue dress!!” while another asked: “Did you sleep at all? Saw you in the same dress on the Today show, which leads me to believe you did not sleep.”

As she hosted Wednesday’s Today, Savannah knocked back cups of coffee and confirmed she’d only had 90 minutes of sleep between hosting jobs.

The mom-of-two was dressed in a different blue dress as she joined her co-anchor, Hoda Kotb, 58, in the studio.

In one Instagram shot, Savannah looked spent as she pulled a funny face and threw her arms up in the air as Hoda looked on.

But despite her lack of sleep, Savannah still managed to smile as she talked politics with Hoda, Craig Melvin, 43, and Chuck Todd, 50.

Savannah captioned her post: “the day after,” and her one million followers quickly commented on the pictures.

“You are an inspiration!” one person wrote, while another said: “All the coffee needed. Great job! “

A third person commented: “The last picture is my favorite. Keep being you!!” while a fourth added: “You are fantastic, Savannah!”

Someone else praised Savannah and said: “you worked hard last night! You were great!”