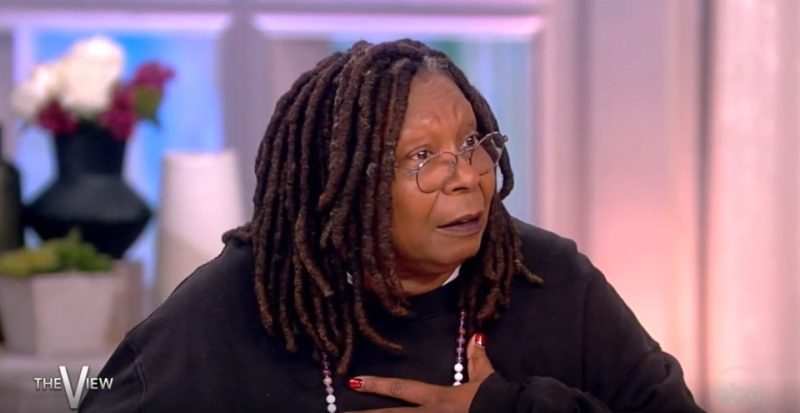 THE VIEW’S Whoopi Goldberg has surprised fans with her behavior in a recent episode.

The TV personality was in a good mood as she celebrated her 67th birthday during Thursday’s show.

ABCShe participated in a lighter conversation about relationships, rather than her usual more serious debates[/caption]

The studio was transformed into a giant bash to commemorate Whoopi’s special day, including a DJ, drag queens, and surprise giveaways for the audience.

The topics discussed also appeared a little lighter throughout the hour, straying away from the panel’s usual heated debates.

About halfway through the episode, Whoopi started a discussion inspired by a Reddit thread about a woman’s husband who was invited to his ex-girlfriend’s destination wedding.

The moderator immediately giggled over the messy situation while adding that the man was not given the option to bring a date to the event.

The ladies agreed that there are “rules” against former partners maintaining a friendship long after the relationship ends.

However, Whoopi didn’t believe that was the case and shared her viewpoint on the matter.

“There’s a lot of people you’ve had a great relationship with, and it doesn’t work, so you stay friends with them because good people are hard to find in your life,” she firmly stated.

“No, [if] you invite him to the wedding, you better include me because I feel then that you’re trying to get slick with me. Then I got an attitude,” the TV star added.

Viewers were shocked that Whoopi participated in the conversation, with one person tweeting: “Interesting. Whoopi is awake for this relationship topic.”

And a slew of others reacted similarly to the New York native’s unusual behavior on the show.

Earlier in the episode, Whoopi opened up about her “freaky” sex life during a naughty discussion about marriage and sex.

At first, the actress was quiet on the subject, but she eventually joined in, directing all eyes on her.

After everyone but Whoopi shared their personal experiences, Sara Haines begged to know: “Whoopi, do you like it freaky?”

That made Whoopi decide to be honest, shooting back: “Oh, I don’t have to try to remember.”

Then in a rare reveal for the Sister Act star, she continued: “I am all things. I’m all those things.

Before she could admit anything else about her sex life, the producers started to play dance music to encourage Whoopi to move on to the next segment.

The TV personality quickly obliged and started dancing to the tunes.

The entire episode was dedicated to Whoopi in honor of her birthday, which takes place on Sunday, November 13.

“We’re celebrating today because we usually celebrate together,” Whoopi told the audience at the beginning of the episode.

“Sunday is the actual day. We’re not working, so we’re doing it today.”

To mark the occasion, guest Emily Blunt handed over a bouquet to The View host.

As the festivities continued, Whoopi spoke about her “favorite things” to her co-host Sara, 45.

The The Ghost star showed off the beauty products from Itinera, her obsession with sneakers, and the Funko Pop collectibles.

Whoopi even offered a pair of Kizik sneakers to each audience member.

Before the end of the program, a lineup of drag queens gathered around the birthday girl.

Whoopi said to the audience: “I’m exhausted. I could sure use a break, like a vacation.

“So could you! Since vacations are also my favorite thing, you’re all going on a trip to Cancun, Mexico!”

After the audience stood up and cheered, Whoopi danced along with the drag queens from her seat and shouted: “This has been a great birthday!

“Happy Birthday to the world!”

The View/ABCElsewhere during the program, Whoopi opened up about her ‘freaky’ sex life[/caption]

ABCWhoopi celebrated her 67th birthday during the episode, which included a DJ, drag queens, and surprise giveaways for the audience[/caption]

PrevPreviousOlivia Attwood admits she is ‘heartbroken’ as she reveals REAL reason for leaving I’m A Celeb in first interview
NextWhen is Nick Cannon’s 11th baby due?Next