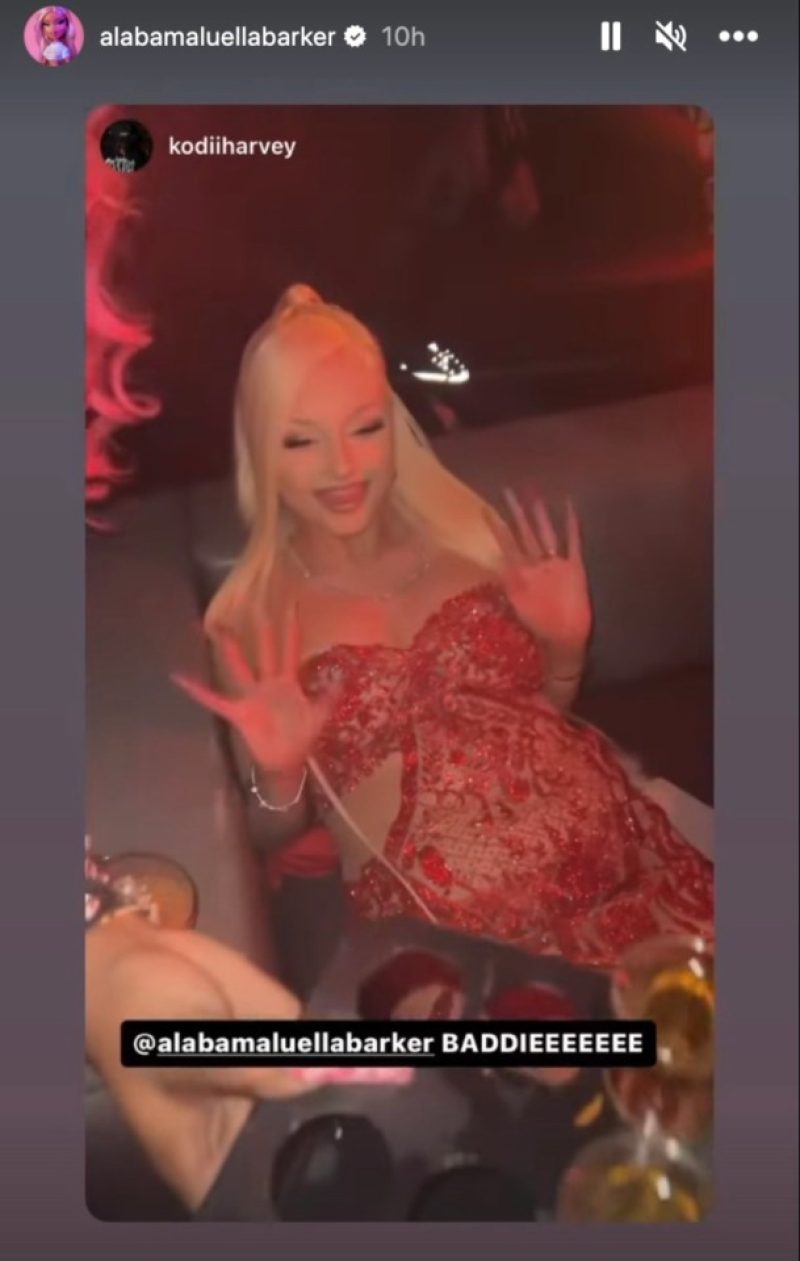 KOURTNEY Kardashian and Travis Barker have been slammed for allowing his daughter, Alabama, wear what fans feel is an inappropriate outfit for her birthday party.

The 16-year-old, whose actual birthday isn’t until next month, threw herself a wild party in a club.

Alabama spread the word on her Instagram Stories, sharing an image of the invite, and teasing: “November 11 has arrived. Y’all ready for tonight?”

She promised a DJ, special guests, and requested that everyone wear black, however, Alabama decided to go against her own rules.

The teen showed up in a revealing red dress, featuring a very-low plunging neckline that she tugged at constantly in a battle to keep it up.

Kourtney’s stepdaughter Alabama is unrecognizable in pic with dad Travis

In an online thread, fans blamed her rock star dad Travis, 46, and her new Kardashians stepmom Kourtney, 43, for letting her wear it.

“What father lets his underage daughter go out dressed like that?” one person asked. “It’s inappropriate for a girl her age.”

Another added: “It’s disgusting how she has been failed by all the adults around her.”

While one person worried about her future: “In my opinion, her parents are failing her and setting her up to be taken advantage of.”

Many fans are concerned Alabama is growing up too fast, especially after the discovery of her new tattoo.

In August, Alabama stunned fans by uploading a video of her secret tiny wrist tattoo.

The social media star took to her Instagram Stories to share a clip of her two Cartier tennis bracelets.

The blond turned her wrist as the jewelry sparkled in the light of her phone camera.

But in the last second of the short clip, she moved her arm allowing fans to spot a tiny tattoo – a single word that was impossible to read from the angle of the video.

Alabama is one of two children that Travis shares with his ex-wife Shanna Moakler. The former couple are also parents to 18-year-old son Landon.

But Alabama and Shanna seem to be at odds lately, with the biological mom out of the picture.

Earlier this month, a fan confronted Shanna and asked why Alabama, wasn’t following her on Instagram.

In a surprising turn of events, Shanna actually replied to the internet sleuth.

She said: “Apparently, I’m a raging a**hole. That’s the word on the street. Lots of laughs.”

As for Kourtney, she and ex Scott Disick share three kids: daughter Penelope, 10, and sons Mason, 12, and Reign, seven.